Does Conservative MP Cheryl Gallant's riding association have ties to North Korea too?

Gallant might "really have to question" where the loyalties of her Renfrew-Nipissing-Pembroke Conservative Association lie considering the riding association's website allowed donors the option of selecting any country in the world as their place of residence – including North Korea.

Gallant herself drew a link between web forms and patriotism during a House of Commons defence committee hearing Thursday, focusing her attention on the possibility that one of the witnesses had vague but nefarious ties to "Russia, Iran and North Korea."

Her evidence? A meaningless drop-down menu on their website.

Gallant asked a representative from the Rideau Institute – a foreign policy think tank that advocates for Canada's "peacekeeping, peacemaking and peacebuilding role in the world" – about a generic drop-down menu appearing on the donation page of the think tank's website, allowing users to select literally any country in the world as their address.

Although most websites on the Internet usually allow users to select any country in the world by default, Gallant said the generic web form on the Rideau Institute's website made her "really have to question" their loyalty to "Canada's national interests":

"When I go to your donation page and I see the different places from which an individual can donate, among them are like Russia, Iran and North Korea, so I really have to question whether or not the Rideau Institute is looking after Canada's national interests."

So, you'd think the website where Gallant collects her own donations wouldn't have a similar drop-down menu too, right?

Although it currently looks to be down for maintenance, a cached copy of the Renfrew-Nipissing-Pembroke Conservative Association's website shows that up until at least March 8th of this year, Gallant's own riding association also allowed prospective donors to select literally any country in the world as their address – including Russia, Iran and North Korea.

What does all of this mean? There seem to be only two possibilities on the table, both equally frightening:

(a) It doesn't mean anything because it's a generic drop-down menu that appears by default on many websites;

(b) An Ottawa Valley Conservative riding association could be in cahoots with Pyongyang. 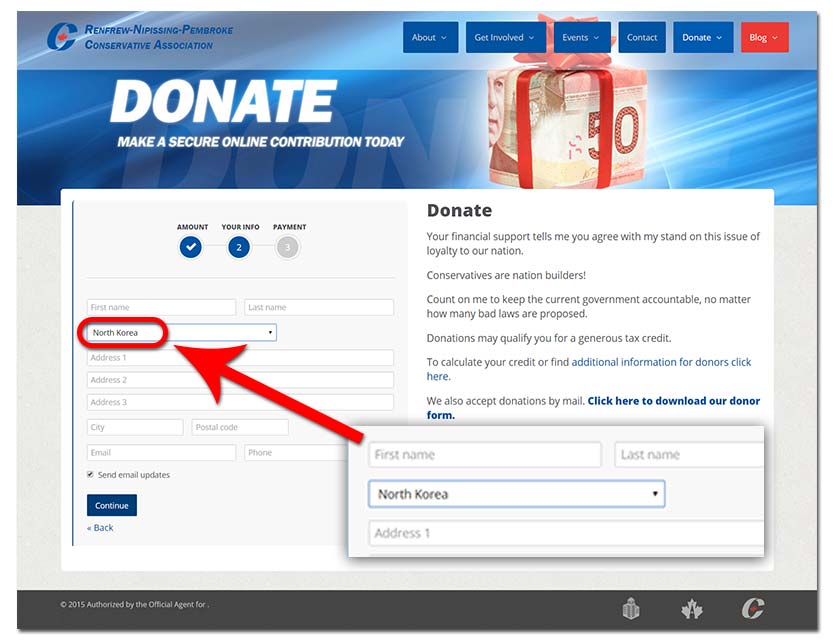 Interestingly, that donation form bears a striking similarity to another one that sparked headlines earlier this year for offering donors an "Easter ham."

Gallant raised the ire of veterans in March after sending out a fundraising e-mail using the image of Cpl. Nathan Cirillo, who was murdered at the National War Memorial in October 2014, to criticize the government's citizenship and refugee policies.

That fundraising e-mail included a link to a donation page on the Renfrew-Nipissing-Pembroke Conservative Association's website offering donors an "Easter ham" as a bizarre reward for their contributions: 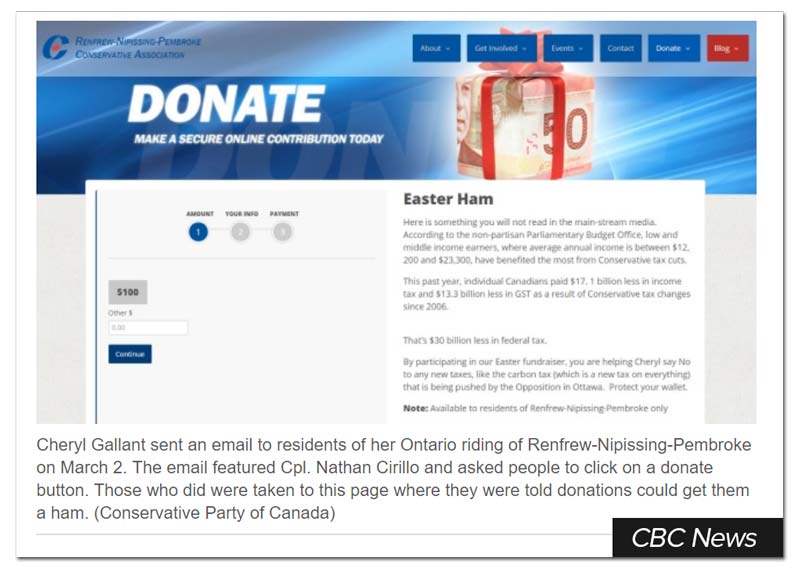 The website notes the "Easter ham" was only "available to residents of Renfrew-Nipissing-Pembroke."

But on the other hand, Gallant didn't seem to buy it when the Rideau Institute noted they only take donations from Canada.

So by her own logic, we "really have to question": where did Cheryl Gallant really send those Easter hams?

Does Conservative MP Cheryl Gallant's riding association have ties to North Korea too?

Extra, extra! More Canadians than ever don't even follow the news