Does Stephen Harper want to pick and choose refugees based on their religion?

Stephen Harper’s recent comments on Syrian and Iraqi refugees suggest Canada could close the door on nearly three-quarters of the population of Syria, based on their religious beliefs alone.

Responding to questions on the Syrian refugee crisis Tuesday, the Conservative leader stated he wants to "make sure that we are selecting the most vulnerable bona fide refugees ... with a focus on the religious and ethnic minorities that are the most vulnerable."

And Harper's statement comes on the heels of a video and online petition promoting "religious freedom" circulated by the Conservatives on the weekend.

The Conservatives' website juxtaposes a graphic warning of the ISIS threat to religious minorities alongside a video of Harper shot in a Toronto-area Coptic church surrounded by Christian iconography. 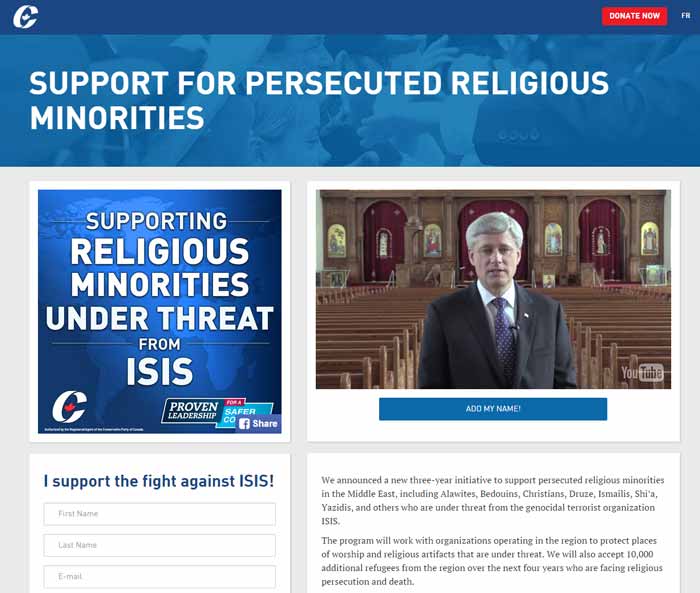 The Conservative website indicates they will "accept 10,000 additional refugees from the region over the next four years who are facing religious persecution and death."

However, the website also provides a list of who the Conservatives consider to be a persecuted religious minority, specifically naming "Alawites, Bedouins, Christians, Druze, Ismailis, Shi'a, [and] Yazidis."

But which religious group does Harper and the Conservatives leave out? Sunni Muslims, representing 74% of Syria's population.

In December 2014, CBC News reported sources close to discussions at a conference on Syrian refugees convened by the UN High Commissioner for Refugees said Canada was interested in only resettling religious minorities.

At that time, an interfaith group responded with a statement calling on the Harper government "to resettle Syrian refugees without discrimination based on religion."

Then-Citizenship and Immigration Parliamentary Secretary Costas Menegakis called CBC's report "ridiculous," but would go on to reiterate they "will prioritize persecuted ethnic and religious minorities ... those at demonstrated risk, and we will make no apologies for that."

Menegakis did not explicitly commit to accepting refugees regardless of their religious status.

What explains the omission?

Are Harper and the Conservatives saying that being a "bona fide" refugee is contingent on being a religious minority and nothing else?

4 reasons Canadians should not be afraid to welcome refugees

Canada, we need to talk about racism