Gosal confirmed to PressProgress Friday night that the men in the video were his volunteers but said they are no longer members of his campaign team.

"Our campaign respects the democratic process and does not condone vandalism. There is no place for this kind of activity," Gosal told PressProgress. "The individuals in the video are no longer volunteering on this campaign."

The video, posted online by YouTube user Brampton Citizen, shows three Gosal volunteers kicking down NDP election signs along the side of a suburban road while erecting Gosal's election signs with a power drill and a large mallet.

The video indicates it was filmed on October 13th.

At one point, the person shooting the video confronts the men and asks if they are with Gosal's campaign team.

The men first respond saying "I don't broke signs, I put a new sign, buddy," then later ask not to be filmed.

Finally one of the men is recorded saying "I'm just doing my job, ok?"

One man featured in the video is wearing a jacket with the words "Team Gosal" on the back: 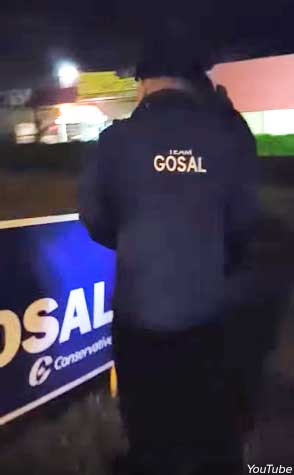 The same "Team Gosal" jacket is the same as the one worn by other volunteers on Gosal's campaign team: 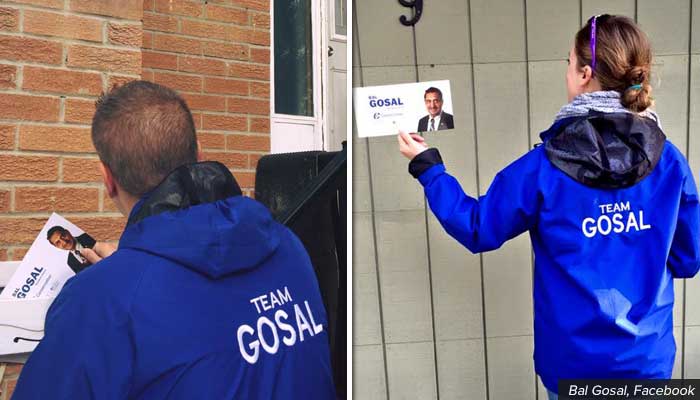 Canadian election laws state that "no person shall prevent or impair the transmission to the public of an election advertising message without the consent of a person with authority to authorize its transmission."

Penalties for damaging election signs can result in $5,000 fine and/or six months in jail.