'Drain the canal'? Kellie Leitch one of the most lobbied candidates running for Conservative leader

In an e-mail to supporters this weekend, the Conservative leadership candidate told supporters she plans to "drain the Canal of influence paddlers and lobbyists" – a line that blatantly echoes Trump's empty promise to "drain the swamp."

However, Leitch's latest attempt to mirror Trump by casting herself in opposition to "lobbyists" is particularly awkward considering records show she is, in fact, one the friendliest with lobbyists in the entire Conservative leadership race.

According to data posted on the federal Lobbying Commissioner's website, Leitch is second only to Lisa Raitt for the title of most communications with lobbyists since she was first elected in 2011.

While Raitt was lobbied 313 time between 2011 and 2016, Leitch is a close runner-up, lobbied 299 times over the same time span – easily casting a shadow over many of her rivals for Conservative leader. 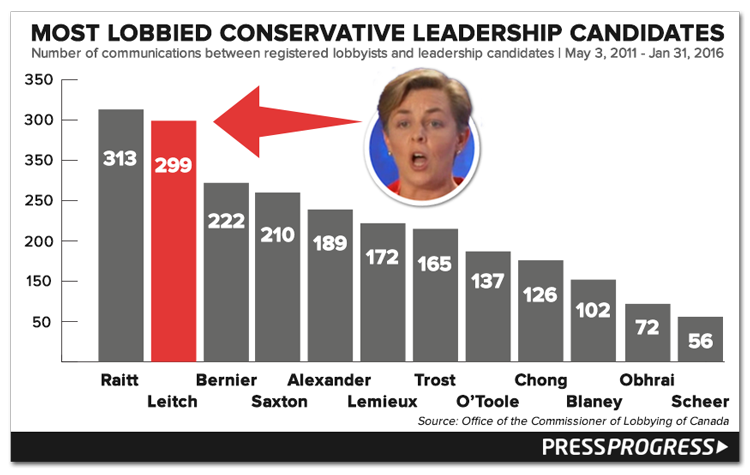 On the other end of the spectrum, Steven Blaney (102), Deepak Obhrai (72) and Andrew Scheer (56) were lobbied the least.

Records show Leitch has given an audience to groups that promote anti-union laws, that advocate looser rules on temporary foreign workers and use images of sad children to promote heavy industrial pollution.

This must be exactly who Leitch had in mind when she started talking about draining the Canal, right?