Can you feel the will-they-won't-they tension heating up again?

Alberta conservatives gathered in suburban Edmonton recently to discuss "What's Next?" for the province's two right-wing parties following the election of an NDP majority government.

Organized by rookie federal Conservative candidate Garnett Genuis, the low-profile event managed to bring together Progressive Conservative and Wildrose insiders with high-level connections. An audio recording of the event, newly obtained by PressProgress, suggests at least one provincial leader is keeping his ear close to the ground. 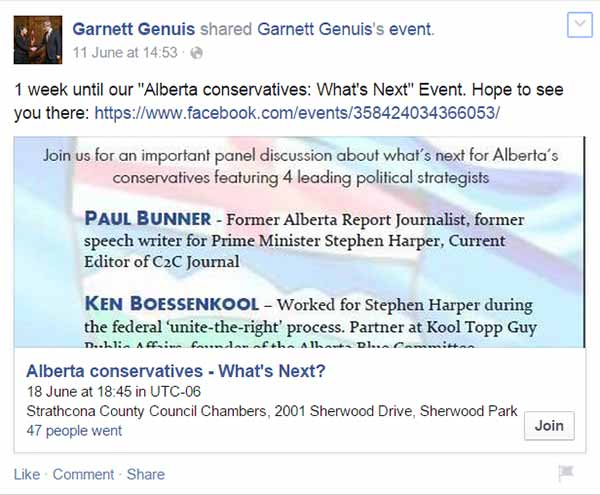 "[Interim PC leader] Ric McIver, my good friend, called me as I was driving to this event and asked if it started at 5:30 because he wanted to stop in and say hello," conservative insider Ken Boessenkool told the audience of conservative activists, although he was careful to say McIver is "not necessarily taking sides in this, he was open to hearing the remarks tonight."

"I will be calling him some time in the next couple days conveying the discussion that went on here tonight," added Boessenkool, who ran McIver's unsuccessful leadership bid for the PC party last year. (In the recent election, he was also the campaign manager for Bruce McAllister, a Wildrose floor-crosser-turned-PC; McAllister lost.)

Following the May election, McIver hinted that merger talks could follow -- just not right away. "We're not in a condition to merge with anybody right now. We've got to get a leader and get organized and decide what direction we're going. Once that's done, maybe and only maybe, can we talk about other things."

At the recent meeting, Boessenkool provided a more clear timeline:

"My own sense is we've got to let things cool a little bit, let's get this federal election behind us, let's unite conservatives to make sure Stephen Harper gets elected, let's let the PCs elect a new leader and then lets do what Paul Bunner said and start getting these two parties together."

Bunner, a former speechwriter for Harper and Wildrose leader Danielle Smith (who is now with the Manning Foundation's journal), was also on hand at the meeting.

LISTEN: Bunner calls for merger of PC and Wildrose parties:

"We have all kinds of incentives to unite the right," Bunner said. "Rather than wait around to find out how good or bad our socialist government will be, Alberta conservatives should move as quickly as possible to unite the right."

Well, it could be happening any time, but as Boessenkool explained, people won't know because merger talks are held "among senior people, unfortunately in private."

And if the merger of the Canadian Alliance with the federal PCs over a decade ago teaches us anything, Boessenkool suggests the two parties will still "bash each other over the head" in public, even while they hold negotiations in behind closed doors: