Scheer said Thursday he will not do interviews on Rebel Media until its "editorial direction" has improved.

Instead, the former Rebel published a YouTube video describing Rebel Media's internal office politics, Levant's temper tantrums and raised questions about what Rebel Media does with money received through donations: "Where does your money go? Here's the thing: no one really knows."

"The Rebel is about nothing more than making money. The Rebel makes enough from its shows to cover its costs and apparently it even makes more from backers on top of that. So what on earth does it need with your money?"

Press Progress can additionally report that Levant is listed as receiving grant money from the Middle East Forum, a Philadelphia-based think tank that says it "promotes American interests in the Middle East and protects Western values from Middle Eastern threats."

A 2011 report from the Washington-based Center for American Progress lists MEF as major players in America's Islamophobia industry, one of "five key think tanks" that have built a "tight network of anti-Muslim" groups who are "primarily responsible for orchestrating the majority of anti-Islam messages polluting our national discourse today."

Levant is well-known to Canadians for railing against "foreign-funded environmental extremists."

According to financial disclosures by the MEF, Levant received grant money from a $2 million fund awarded to individuals and groups "working to promote the Forum's goals of forwarding American interests and preserving Western civilization."

Press Progress inquired about how many grants Levant has received through the special MEF fund.

MEF did not immediately respond to multiple requests for comment.

Archived copies of the MEF's website suggest Levant's name was added to an official list of grant recipients between September and November 2015, several months after Rebel Media first launched in February 2015.

MEF President Daniel Pipes, who was a guest speaker on Levant's 2016 "Rebel Cruise" (the 2017 installment of the "Rebel Cruise" was cancelled by Norwegian Cruise Lines Thursday), is described by CAP as a "go-to expert in the Islamophobia network" and an "anti-Muslim propagandist" who has a history of promoting controversial views:

• In 2012, Pipes claimed to have unearthed evidence that former US President Barack Obama was "born and raised a Muslim."

• In 2008, Pipes called for racial profiling of Muslims to address the "threat" of "Islamist lawfare," claiming supporters of radical Islam are exploiting the legal system and wielding influence over international organizations like the United Nations.

• Pipes and the MEF were also cited no fewer than 16 times in Norwegian white nationalist terrorist Anders Breivik's sprawling 1500-page manifesto – Pipes would later concede he and Breivik have "common opponents," but claims he has a more nuanced view of Islam and believes in "its potential for change."

According to the Center for American Progress' report, MEF has previously received millions in funding from foundations bankrolled by wealthy conservatives and GOP donors. 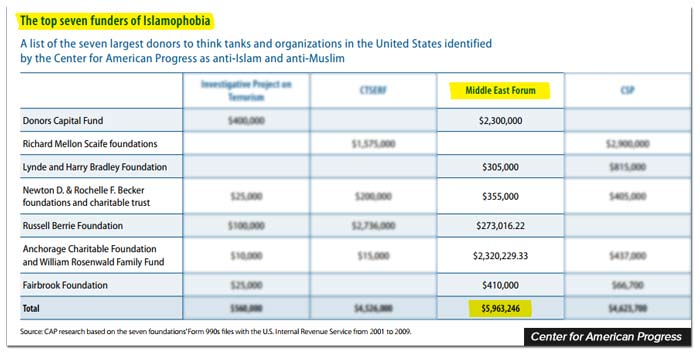 One of Middle East Forum's largest donors is the Donors Capital Fund. CAP describes the fund as financed by a number of wealthy conservatives who are "difficult to trace" and must contribute a minimum of $1 million to join.

The UK-based newspaper The Independent also reported in 2013 that Donors Capital had been used by Charles and David Koch to "secretly fund" climate change denial groups.