Canada has the second lowest corporate tax rate in the G7, yet Corporate Canada has still managed to stash away nearly $200 billion in offshore tax havens anyway.

How can that make sense?

Corporations aren't living up to their duty to pay tax in their home country at the same time as Harper claims corporations need to be appeased with historic tax breaks just to keep them from deserting the country.

During Thursday's French leaders debate, after he was accused of protecting multinational corporations, Harper defended his record on tax havens, pointing out he "signed an agreement ... with our G7 partners to pursue these objectives."

Here's what the Financial Times said in 2013 of the non-binding declaration:

"The written statement has plenty on what governments and companies 'should' do ... But critics are not convinced. It lacks a clear promise on whether G8 members will follow through on these obligations and by when."

And Harper should remember it was the G8 back then (not the G7, this was before Russia got booted out) seeing as it was only Harper and Vladimir Putin who stood against the agreement to crack down on the global shadow economy.

Harper later signed on after bad press in Britain and Canada, although when he did agree, the PMO used it as an opportunity to re-announce old anti-terrorist financing measures.

But behind the scenes, Conservatives gutted Canada Revenue Agency, announcing plans to eliminate 3,000 jobs including hundreds of auditors and 50 "highly trained" managers in the CRA unit responsible for hunting down international tax dodgers. 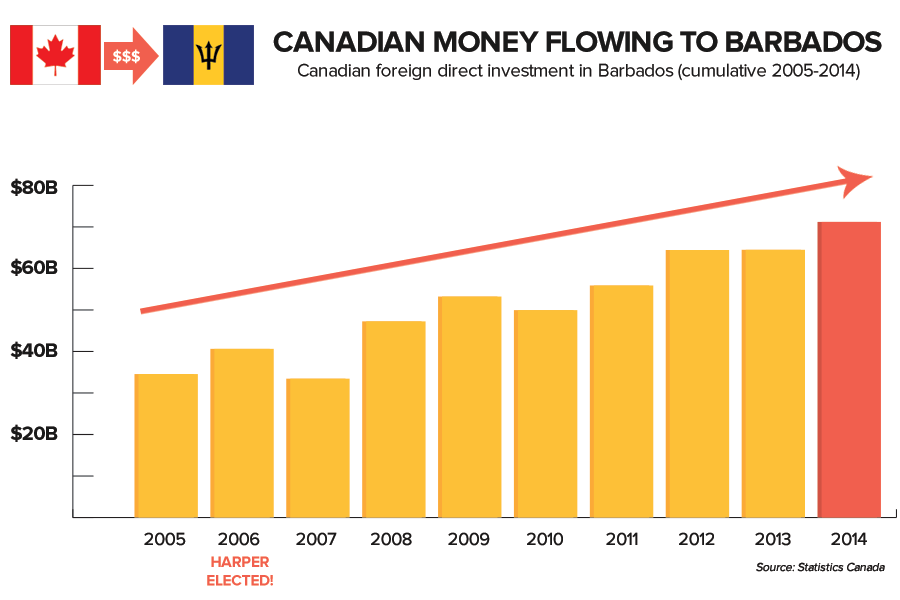 Canadians for Tax Fairness, a member of the international tax justice network, has estimated Canada loses $7.8 billion in tax revenue each year from tax avoidance, although Corporate Canada's offshore cash has grown by nearly $40 billion since the last election.

CRA told Page it had no estimate of how many tax dollars could be missing.

However, the Conservatives can pat themselves on the back for a few things.

In 2013, the Conservatives announced they would invest in new "tax-evasion software" and tighten banking reporting requirements, while skilled auditors at CRA have been replaced by a 1-800 tipster hotline intended to invite people to report tax cheats, offering a 15% cut as reward.

After half a year, the phone number received 1,000 calls, only 300 of which were from actual informants and CRA has not announced any convictions.