Maybe the Fraser Institute's heart is two sizes too small?

On the eve of Labour Day, the right-wing think tank just published its annual "study" that tries to make a case for rolling back worker rights.

(Right-to-work legislation allows workers in unionized workplaces to opt out of union membership and paying dues. In Canada, that effectively means getting rid of the Rand formula, established in the 1946 Supreme Court decision to ensure there are no free riders; while workers can choose whether to join a union, they must pay dues to the union if they are covered by the collective agreement negotiated with the employer.)

In a world where up is down and down is up, the Fraser Institute's "study" classifies "right-to-work" jurisdictions as balanced and unbiased (Mississippi, Arkansas, Utah, Alabama, and Texas, to name a few). These U.S. states offer "flexibility" while other jurisdictions with labour laws to protect workers (Canadian provinces) are "biased."

Here's a map the think tank put out to hammer home the point: 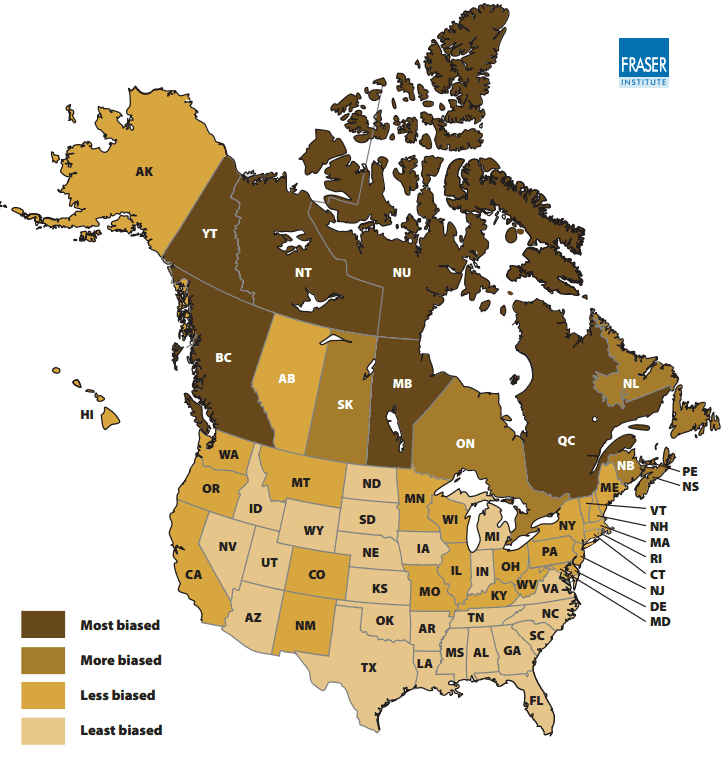 And what exactly does "flexibility" mean? "Flexibility means employees can more easily change jobs, or even industries, in search of better compensation or working conditions," the report says. "Similarly, flexibility allows employers to change the mix of capital and labour to respond to market changes."

So, what? "Flexibility" means easier to drive down benefits and wages and lay people off or fire them when it's convenient?

To make its case, the Fraser Institute's number wizards put together a score card ranking provinces according to a list of indicators (including how easy it is to unionize, how hard it is to decertify a union and the presence of laws and regulations relating to unions).

They call it the "Index of Labour Relations Laws" to give it the aura of not being a silly exercise in engineering the answers Fraser Institute wants.

(For methodological problems with other Institute "indexes," see what this UN agency has to say about the Institute's "Economic Freedom of the World Index".)

Take a look at the chart down below. Note how everyone gets a big fat zero except the U.S. states with "right-to-work" laws, even though these "regulations" are enshrined in a watershed Supreme Court of Canada decision: 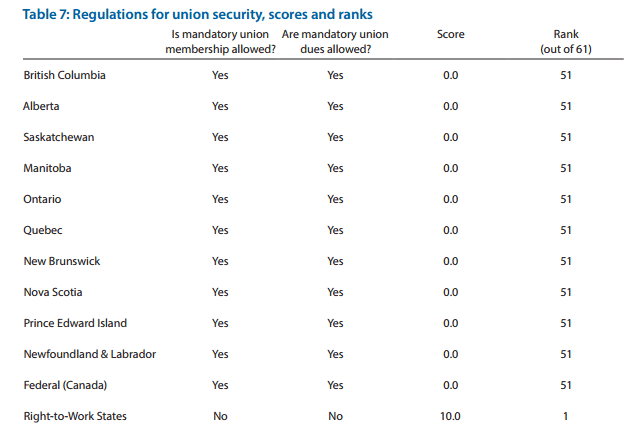 Seriously, this index looks just as silly as this:

And here's some facts about "right-to-work" that conveniently failed to make it into Fraser Institute's report:

The last word, though, goes to the CBC's The Exchange with Amanda Lang:

Photo: melissaclark. Used under a Creative Commons BY-2.0 licence.