VIDEO: Harper says he will not "hold everybody else accountable for their actions"

Prime Minister Stephen Harper suggested Thursday he will not hold any of his staff accountable for their roles in the Mike Duffy affair.

And according to Harper's fast imploding narrative of events, that effectively means he's letting his current Chief of Staff Ray Novak off the hook for failing to inform the leader of the country about the secret $90,000 cheque his old Chief of Staff Nigel Wright gave to Senator Mike Duffy.

Appearing behind a podium emblazoned with the word "leadership," Harper may have had a Freudian slip when he said he does not plan to "hold everybody else accountable for their actions" after a reporter asked if he still has "confidence" in Novak.

Novak, who once lived in the attic of Harper's garage, has come under intense scrutiny. Earlier this week, an Ottawa courthouse was told Novak knew about Wright's secret payment to Senator Duffy.

And Former Prime Minister's Office lawyer Bejamin Perrin testified under oath on Thursday that Novak was told not once but twice about the cheque to Duffy.

That's awkward. Just this week, Harper's spokesperson Kory Teneycke said "it's unfathomable that Ray would be aware of a payment from Nigel to Mr. Duffy and not tell the Prime Minister. It's unfathomable."

And when he was questioned in the House of Commons, Harper repeatedly left the impression Novak (whom Harper named as Wright's replacement as Chief of Staff) had no involvement in the Duffy affair: 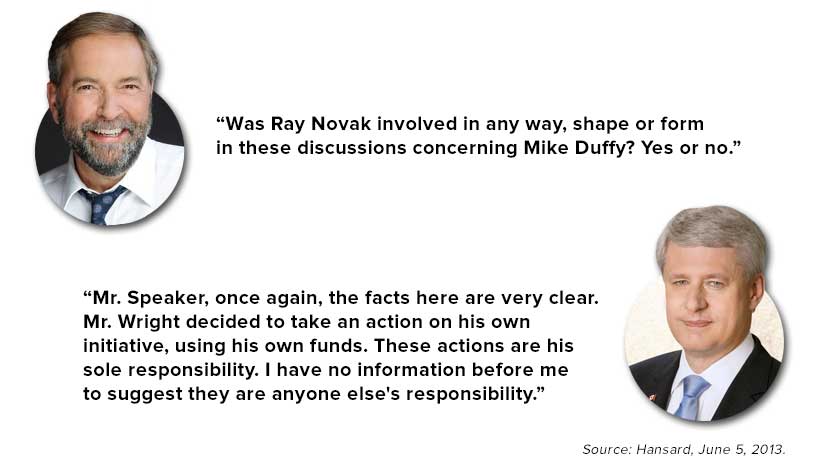