This is what one of Canada's wealthiest provinces is supposed to look like?

According to a new report published by the Canadian Centre for Policy Alternatives, wages are low and costs of living are high in Premier Christy Clark's British Columbia.

Although Clark's BC Liberal government tries to present a rosy picture, the picture painted by the report shows Clark balancing the books by slashing social services as working families struggle and poverty increases.

Wages and the cost of living

Thanks to a decade of heel dragging, the BC Liberal government's heel dragging, the province's minimum wage was frozen at $8/hr for a full decade before gradually rising to $10.85/hr in 2016 – currently among the lowest of any province in Canada, though it's set to inch up slightly later this year.

As a result, the CCPA points out someone working full-time hours on minimum wage in BC will only earn $19,747 per year. That's a full $3,500 per year below the poverty line.

Not to mention, one-quarter of the paid workforce – half a million British Columbians – currently earn less than $15/hr, the majority of whom are over the age of 25, work full-time, have worked the same job for at least three years and have households to support.

That means half a million low-wage workers now fall well below what most families need to earn a living wage just to meet what's considered a "bare-bones budget":

As wages stagnate, BC families also have to deal with rising costs for everything ranging from food and housing to child care costs.

It's well-known that housing costs in metro Vancouver have skyrocketed in over the last decade – the cost of a detached home has jumped 19 times relative the median household income, while condos have increased six times the rate of incomes. 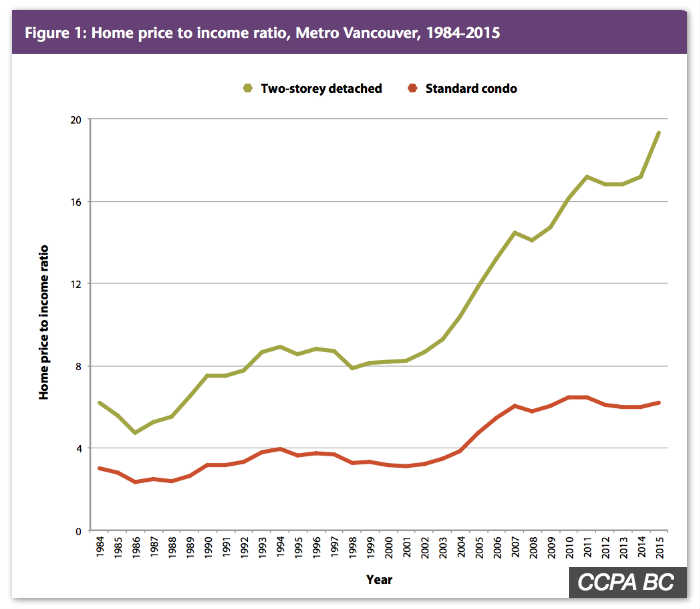 And 247,280 households in BC currently face "core housing needs" – defined by the Canada Mortgage and Housing Corporation (CMHC) as the share of population living in housing that's overcrowded, in need of repairs or costs more than one-third of their paycheque.

That counted for 15.4% of all households in BC: 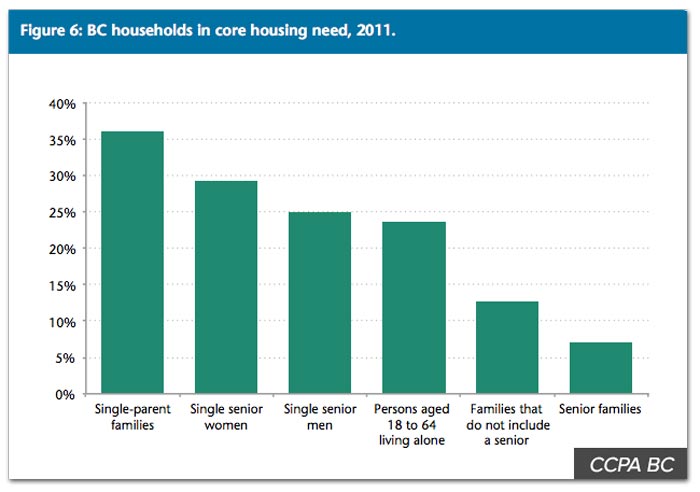 More recent data finds 43% of renters and 22% of home owners now spend over 30% of their paycheques on housing alone.

While Clark's BC Liberal government has branded her newly launched Home Partnership Program as a way to help first-time homebuyers enter the "really tough housing market," a lot of people say the plan is a "bad idea."

While the government's plan to offer first-time homebuyers interest free loans of up to $37,500 to subsidize downpayments might sound good on paper, it doesn't actually address the physical lack of houses.

Flooding the market with more cash might even drive housing costs higher while doing nothing to help renters.

Meanwhile, many families are dealing with rising costs for child care too.

And when it comes to food insecurity in BC, a recent annual report produced by Food Banks Canada estimated 103,464 people turned to food banks across BC in March 2016 – up 3.4% compared to 2015.

As many as 12.7% of British Columbians reported dealing with food insecurity in 2016, half of whom are those working low-wage workers and their children.