A parents' advocacy group that has been a vocal opponent of legislation protecting LGBTQ students in Alberta schools is now encouraging its supporters to get out and vote for the leader of Alberta's new United Conservative Party.

Parents for Choice in Education (PCE), a group that wants to use public money to fund private religious schools and has been outspoken in its opposition to Gay-Straight Alliances, is bragging that it recently obtained "powerful database software" that can be used to "organize and mobilize our supporters within specific constituencies."

The group lists local school trustee elections, UCP MLA nominations and this October's UCP leadership vote as examples of how they plan to "elect candidates that will be our voice."

Although they stress they're "non-partisan," the group was founded in 2012 by Conservative MP Garnett Genuis and has more recently proven a loyal ally of UCP leadership candidate Jason Kenney.

When he announced he would be seeking the UCP leadership in July, PCE issued a statement thanking Kenney for opposing "the curriculum re-write and the undermining of parental authority in Alberta schools."

Likewise, a report by PCE is the one and only source cited in Kenney's backgrounder on his plans for the education system. 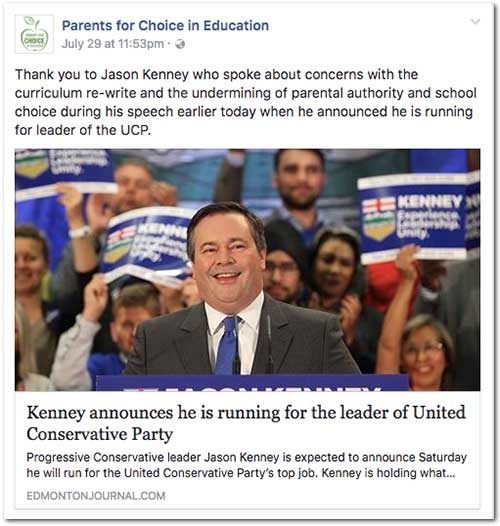 Since entering provincial politics, Kenney has repeatedly dog whistled to his social conservative base that Alberta Premier Rachel Notley is secretly trying to push a radical "social engineering" agenda in Alberta schools.

Earlier this year, Kenney triggered a widespread backlash after he told the Calgary Herald's editorial board he would out students participating in GSA clubs. That "blow-up" followed Kenney's response to a survey by PCE indicating he wants parental consent to participate in GSAs to be mandatory.

As documented by Progress Alberta, PCE's Board of Directors include a number of individuals with "hardcore social conservative connections," including one director who founded an anti-abortion group that used "gruesome images" comparing abortion to the Holocaust, another director who refused to comply with laws allowing GSAs claiming they promote a "gay lifestyle" that would "confuse and corrupt our children." A third director is was a 2015 candidate for the Christian Heritage Party.

In 2016, PCE released a report claiming Alberta's Ministry of Education was "naive and oppressive" because they don't refer children to programs that "repair" a student's "gender identity" or convert their "sexual orientation."

PCE Executive Director Donna Trimble blamed "extremists in the LGBTQ movement" for intimidating the medical establishment into silence on the benefits of such programs.

The group's website and social media accounts also link extensively to blog posts, videos and other materials produced by social conservative activist Theresa Ng who has also spoken at events hosted by PCE – Ng and PCE have even joined forces on a campaign targeting Alberta politicians. 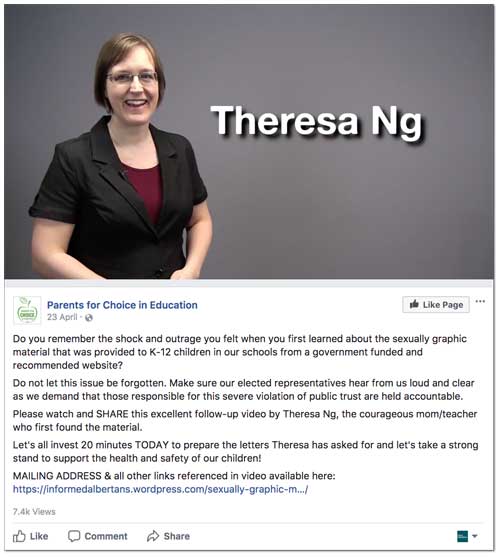 As a result of their campaign, Ng says she was granted an audience with UCP MLA Leela Aheer as well as Jason Kenney.

Aheer even read a statement praising Ng for "her efforts on behalf of all Albertans" in the provincial legislature. 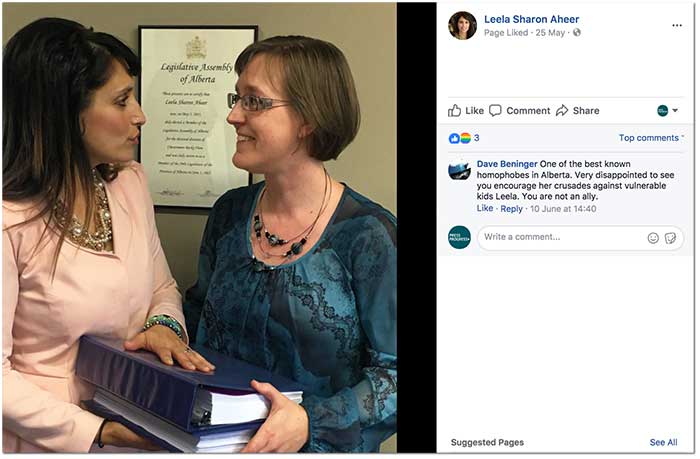 Earlier this summer, NG appeared alongside PCE Executive Director Donna Trimble at a social conservative conference with promotional materials claiming "the family is under direct attack" by Alberta's Department of Education.

One way Ng thinks Alberta is attacking "the autonomy of families" is by refusing to subject children to discredited medical procedures based on junk science – video from the conference shows Ng criticizing the Alberta government for refusing to refer students to programs that "purport to fix, change or repair a student's sexual orientation, gender identity, or gender expression":

"A third change that is very significant in this document was a clause that said 'No student or family should be referred to programs which purport to fix, change or repair a student's sexual orientation, gender identity, or gender expression.' So, functionally, this means what the government the saying is that there are only certain options of help that should be available to children ... [That's] a huge change in the autonomy of families to decide for themselves what is the best treatment and the best option for their own children."

The UCP's views on LGBTQ issues have been a subject of intense public scrutiny in recent months.

Before entering politics a few years ago, UCP interim leader Nathan Cooper once worked for a hardline social conservative group that opposed the so-called "homosexual agenda."

Last week. Kenney – who once argued Canada "opened the door for polygamists" and "incest" when "the Supreme Court invented a constitutional right to sexual orientation" – snubbed an invitation from Canadian musician k.d. Lang to discuss LGBTQ rights.