It's that time of the year!

Your uncle who listens to waaaaay too much conservative talk-radio is on the war path, going on another one of his legendary Christmas dinner rants about how he's being taxed to death.

This year, be prepared. Rather than nod politely until he's finished, why not respond with some facts?

Here's how you respond:

1. The tax rate actually used to be much higher than it is today:

Today, a median income earner in Canada is looking at a combined federal-provincial marginal tax rate ranging around 20.5 to 26% (lowest in Ontario and highest in Saskatchewan). Those in the top tax bracket pay between 39% (Alberta) and 50% (Nova Scotia).

2. Wealthy Canadians whittle down what they pay in tax with loopholes:

Thanks to tax loopholes (for example, CEOs increasingly taking stock options as compensation rather than wages for the tax advantage and creative uses of the capital gains tax), wealthy Canadians are able to whittle down their tax bill and pay far less than their marginal tax rate.

3. The tax burden is shifting from corporations to regular people:

Around the world, it's estimated that a staggering $21 to 32 trillion belonging to multinational corporations and the global wealthy elite are flowing through a maze of offshore tax havens. In Canada, one conservative estimate pegs Canada's offshore hoard at $170 billion in the world's top 10 tax havens alone. And with $62.95 billion, Barbados – YES, THE TINY ISLAND NATION OF BARBADOS! – has somehow become Canada's third top destination for foreign direct investment after the United States and UK.

So why should this matter to you? Last year, for the first time in Canadian history, personal income taxes accounted for more than half of all government revenues, a "sign that Canada's tax burden is slowly shifting away from corporations and onto consumers." As Senator Percy Downe puts it, "if overseas tax cheats don't pay their fair share of taxes, the rest of us have to pay more to make up the shortfall."

4. Don't believe everything you hear from Canada's tax outrage industry:

Since the 1980s, Canada has seen the rise of right-wing think tanks and "grassroots" groups who have waged a long, relentless war to drive down taxes to justify cuts in public services.

Earlier this year, the math wizards at the Fraser Institute released a report that claimed Canadians now pay more in taxes (around 42%) than they do the necessities of life. To reach this number, they padded the tax bill of the average family by counting corporate taxes, along with royalties on oil and gas extraction, import duties, and taxes relating to tobacco, liquor and amusement.  "Is it reasonable to include corporate taxes in the total that Canadian families pay?" asked former Walrus Editor John MacFarlane in a stinging Editor's Note. 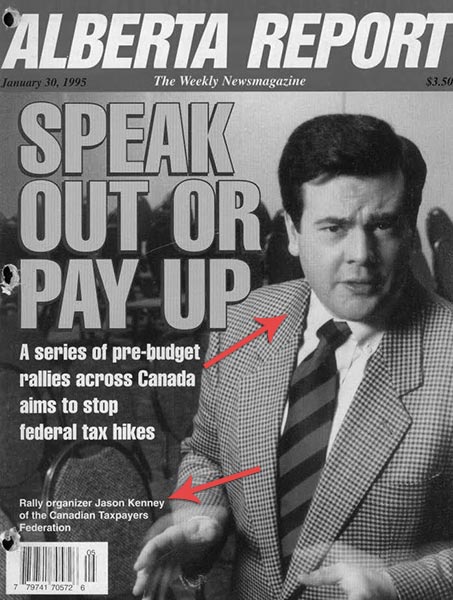 Meanwhile, the Canadian Taxpayers Federation is trying to convince everyone that lowering taxes for millionaires could help Canadian hockey teams win the Stanley Cup, despite the two lowest taxed teams (Calgary and Edmonton) being among the worst in the NHL last season and three of the conference finalists (Los Angeles, New York and Montreal) having the highest tax rates for millionaires.

Here's how you respond:

1. Corporate tax cuts are not a good way to create jobs:

According to the government's own numbers, cutting corporate taxes is the least effective way to create jobs – with a calculated return of 20 cents in growth for each tax dollar cut. In contrast, investing in infrastructure gives you a $1.50 return for every dollar spent. Tax cuts still sound like a good investment?

In the last 14 years, Canada's corporate tax rate has been slashed in nearly half by Liberal and Conservative governments, from 28% in 2000 to 15% today. This has resulted in more investments in jobs and economic activity, right? The employment rate has been going down, not up. And despite what some claim, lowering corporate taxes has also led to lower corporate tax revenues.

A recent survey of 150 entrepreneurs heading some of America's fastest growing start-ups revealed they "rarely cite low tax rates or business-friendly regulations" in deciding where to locate their businesses, instead pointing to access to a local pool of skilled employees as being the biggest factor in deciding where to do business. In fact, only 5% of entrepreneurs even mentioned taxes, and words like "'park' and 'restaurants' were discussed more frequently than terms related to taxes and regulations."

3. Our last "tax cut" for businesses will cost half a billion dollars and create only 800 jobs:

Despite Oliver's claims that it "will create 25,000 new jobs," the Parliamentary Budget Officer projects the "tax cut" will cost half a billion dollars and create only 800 jobs at a rate of $687,500 per job created.

HERE'S HOW YOU RESPOND:

1. Canada doesn't have a spending problem. We have a revenue problem:

One of the big persisting myths in the Canadian imagination is this idea that government spending is out of control. But aside from anecdotes that pop up in the media from time to time, there's no evidence to suggest this is actually an issue.

As the Globe and Mail's Bill Curry puts it, "by the time of the 2015 campaign, Conservatives will have shrunk the federal government to its smallest size in over 50 years." 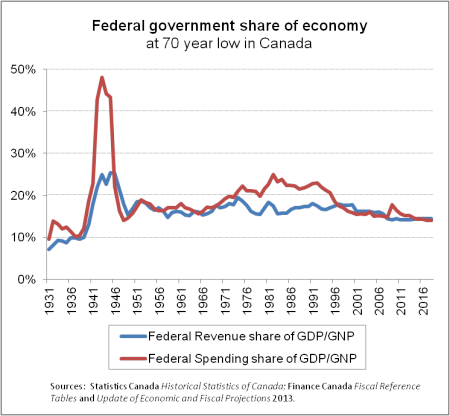 2. We've already trimmed the fat – the government's already been chewed down to the bone!

Between 2012 and 2016, the government is slated to have eliminated 37,000 full-time, mainly front-line jobs in the public sector in their rush to free-up money for nearly $27 billion in tax cuts that will disproportionately benefit wealthy Canadians. That represents an 8% reduction of Canada's public service.

Heck, you know we've hit rock bottom when the government is actually selling off office plants.

3. What's this "fat" and "gravy" they speak of anyway? Are schools and hospitals fat? Are veterans' pensions gravy?

So what have we cut already? A recent Canadian Centre for Policy Alternatives report reveals: