Editor's note: Updates on this story have been included at the bottom of this post.

A pro-oil activist is doubling-down on a controversial Facebook Post that promotes Canadian oil on the grounds that Canadians think "lesbians are hot."

In fact, Robbie Picard, former leader of the Fort McMurray and Edmonton "I Love Oil Sands" campaigns, blames the backlash on "straight, middle-class white guys" and adds that he's "going to go on the record and say that all lesbians are hot."

This even as Facebook commenters are slamming the imagery as sexist, xenophobic and something that would be marketed at "17 year old boys," while the group behind the "I Love Oil Sands" campaign is attempting to distance itself from the renegade Facebook page.

The controversy began Sunday when a Facebook page called the "Canada Oil Sands Community" published a racy meme of "two girls kissing" in an attempt to link "Canadian oil" to "equality": 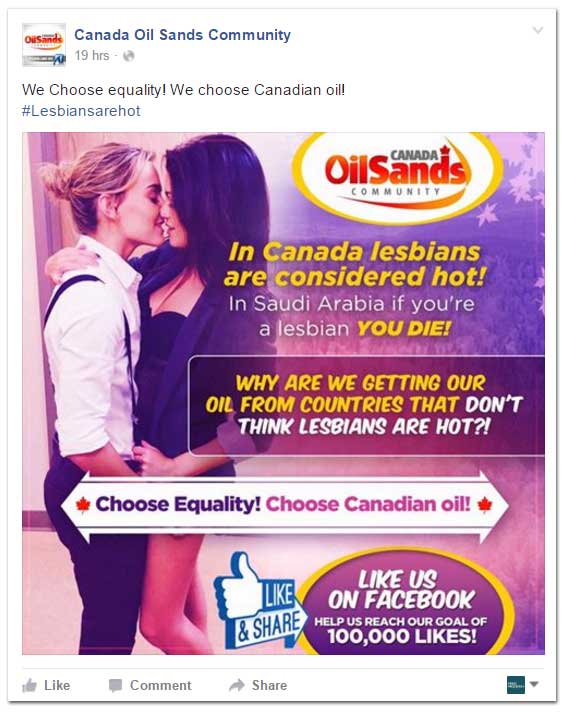 But despite the negative reaction to the message, Picard decided to double-down Monday.

"I'm kinda shocked that everybody's talking about two girls kissing on a poster, like it's the end of the world, instead of the bigger issue that if you're gay in Saudi Arabia they’ll hang you or cut off your head ... We in Canada, especially in Ontario and Quebec, have no problem gassing up our cars and supporting this regime that commits far more horrors than two pretty girls on a poster."

Picard, who describes himself as a "gay oil sands supporter," said the meme "is part of a bigger plan" to start conversations about Canadian oil exports, and suggested that "the people who are most upset are the straight, middle-class white guys."

Cody Battershill, who leads a group called Canada Action that aims to reframe the debate around natural resources and runs the "I Love Oil Sands" campaign, took to the Canada Oil Sands Community Facebook page Monday to distance his organization from Picard's racy graphics:

Except Picard told Alberta Oil Magazine earlier this month he was "in charge of the 'I Love Oil Sands' movement in Fort McMurray and Edmonton."

Desmog Canada has documented that Picard along with a former Conservative Party of Canada riding president helped Battershill organize the launch party for Canada Action in September 2014.

Rebel Media's Ezra Levant credited Picard as the person who "who created the popular 'I Love Oil Sands' t-shirts and hoodies" – swag that Canada Action sells on its website.

And, not to mention, Battershill actually appears in one of Picard's profile photos on Facebook – along with an "I Love Oil Sands" hoodie: 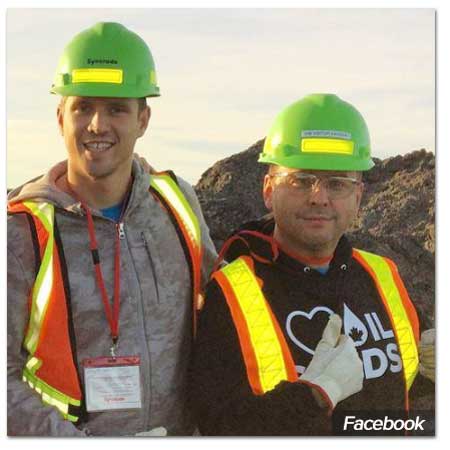 UPDATE: Battershill tells Fort McMurray's Mix 103.7 FM that Picard is no longer connected to the organization and that he "does not speak for, and is not representing Canada Action or I Love Oil Sands in any capacity."

Battershill adds he has sent Picard a reminder to "cease and desist" in using the "I love Oil Sands" logo.

UPDATE 2: Picard deleted the controversial meme from the "Canada Oil Sands Community" Facebook page Monday night and apologized, explaining "it was not my intent of demeaning women or any people of any sexual orientation."