VIDEO: If he becomes Prime Minister, Maxime Bernier might switch Canada back to the gold standard

It appears Maxime Bernier, who's kicking off his bid to become Conservative Party leader on Sunday, thinks so.

In fact, the Conservative leadership hopeful and occasional blogger says he's very much open to the idea of linking Canada's currency to the gold standard – a practice abandoned nearly a century ago.

"In most countries, money was linked to gold until the First World War, which means that the quantity of money increased at the same rate as the quantity of gold," Bernier explained in a 2010 installment of his video blog.

Although John Meynard Keynes, one of the 20th century's most influential economists, called "the old-fashioned gold standard" a "barbarous relic" of the past, Bernier suggested restoring the gold standard could bring about a return to "the most prosperous periods of human history":

"The 19th century was one of the most prosperous periods of human history thanks to this system. Prices tended to go down instead of constantly going up. The level of debt of countries and households was under control. Economic crises were short-lived. More and more economists believe that the gradual relinquishing of the gold standard during the 20th century was a mistake, a mistake which brought about the Great Depression, the inflation of the 1970s, and the recessions that keep afflicting us.

I agree. I agree with this analysis. To return to a stable and sustained economic growth, we need to bring back stability to our money, and in the history of civilization, gold and silver always served as anchors to monetary stability."

Of course, there may be a few wrinkles in Bernier's theory.

The 19th century was also marked by widespread poverty, destitute living conditions, crummy labour standards and other things you may have read about in a number of Charles Dickens novels.

The gold standard also created not-so-stable booms and busts: the gold rushes of the 19th century, to name one example.

And as The Atlantic's Matthew O'Brien points out, prices weren't exactly stable under the gold standard either: 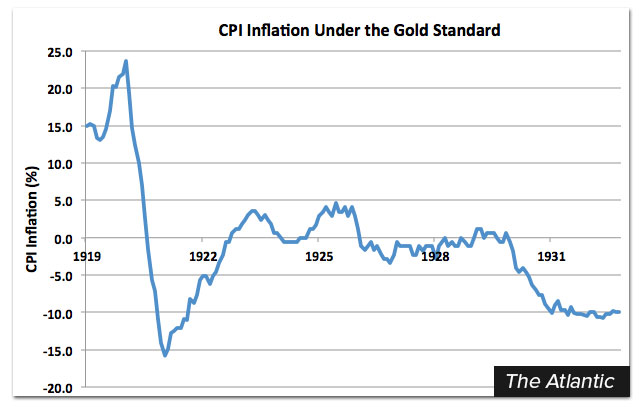 As for his claim that "more and more economists" agree that the "relinquishing of the gold standard" was a "mistake," it's not clear to which economists Bernier is referring.

According to a 2012 poll of 40 top American economists, including past economic advisers to Republican and Democrat presidents, precisely 0% agreed that switching to the gold standard would be in any way good for "the average American."

Weighted for each economic expert's level of "confidence" in their answer, 66% "strongly disagree" restoring the gold standard would be a good thing, while the remaining 34% simply "disagree" that it could be a good idea.

"Eesh. Has it come to this?" remarked former White House economic adviser Austan Goolsbee in a supplementary comment. 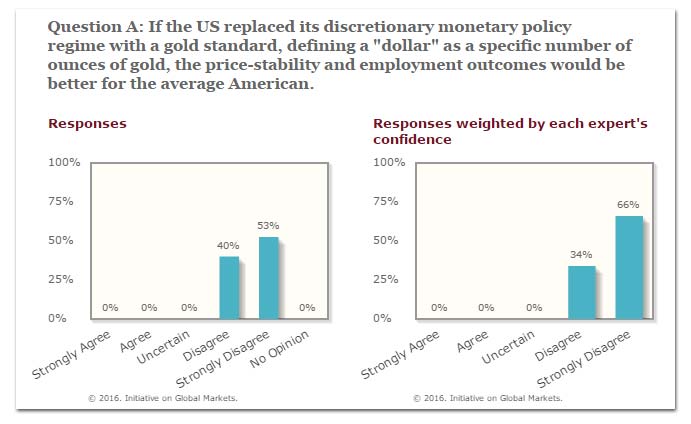