The nature of work and poverty is changing and that's changing the landscape in Canada's biggest and richest cities too.

A new report by the Canadian Centre for Policy Alternatives. taking a close look at urban centres in Ontario, shows patterns of growing inequality are increasingly being mapped onto big cities in Ontario and across the country. As the report notes:

"Canada's two largest cities (Toronto and Vancouver) are becoming giant modern-day Downton Abbeys, where a well-to-do knowledge class relies on a large cadre of working poor who pour their coffee, serve their food, clean their offices, and relay their messages from one office to another. The professional knowledge class relies on the working poor to maintain their gardens, mind their children, and clean their houses."

Here are a few other things revealed by the report:

It used to be the case that the city's poorest neighbourhoods were concentrated downtown, encircled by more affluent, middle-class suburbs on the edge of town.

Today, that pattern has largely flipped.

Take Toronto, for example, where economic forces are creating a "stratified metropolis."

The report points out "rising housing costs" and the "upwardly mobile" white collar workforce are "pushing poorer people out of the core" to the suburbs where they "face longer travel times to land jobs" and "have the worst access to the city's subway system." 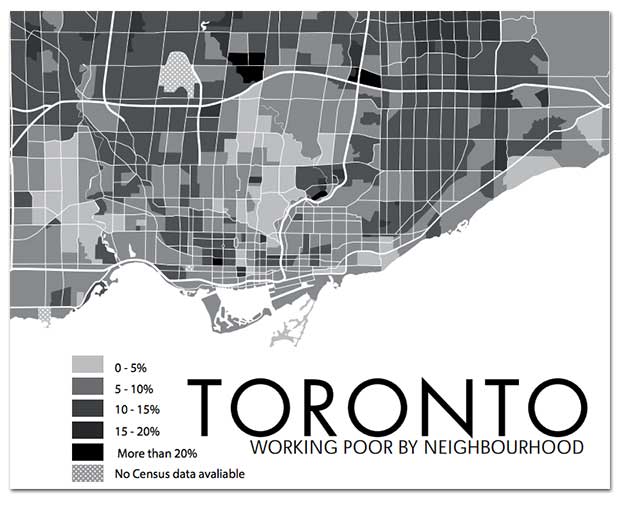 A similar pattern is playing out in Ottawa too.

Over the last decade, "gentrification forces are also pushing low-income residents out of some neighbourhoods in the downtown core," driving lower-income residents and immigrants to Ottawa's surburbs.

In addition to those neighbourhoods lacking accessible resources and a sense of community belonging, it also involves added costs for public transit and lack of service for "people employed in the service industry and/or doing shift work."

"It takes nine hours of labour at minimum wage (before deductions) to pay for a regular pass and just over eleven hours to pay for an express pass which is what you need in a non-urban area, that is if there is any bus service at all," notes Linda Lalonde of the Ottawa Poverty Reduction Network. 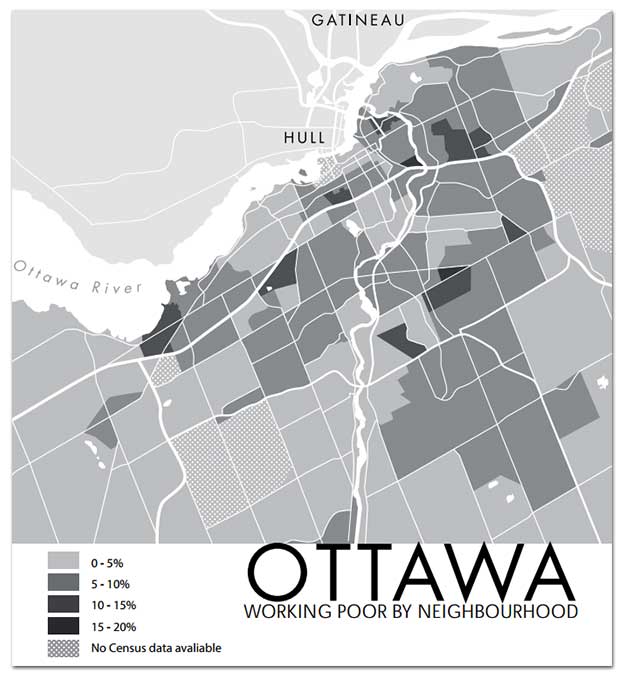 The decline of manufacturing and the rise of precarious work

So what's is driving these changes?

As the report points out, "many good paying jobs in sectors such as manufacturing are being replaced by more precarious, lower paying jobs."

Manufacturing has historically provided stable, good-paying jobs that don't necessarily require a postsecondary degree. But the jobs that have taken their place – mainly retail and service-industry jobs – tend to be lower-paid and less secure.

And while job quality and income has declined for many working Ontarians, the proportion of people in the workforce also dropped by 2.2% between 2006 and 2012. 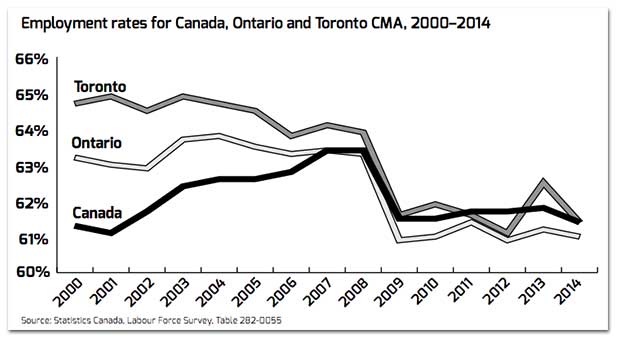 And even within this "fast growing" knowledge economy, plenty of less fortunate workers – many of them young and highly educated – face a precarious working conditions characterized by low-pay, unreliable hours, temporary contracts without benefits and no workplace representation.

Working poverty is on the rise

The report finds that working poverty is heavily concentrated in Canadian cities – and it's increasing.

Toronto, the largest urban centre, has by far the highest percentage of working poor in the country, followed by Vancouver (the second largest).

Across Ontario working poverty has been steadily rising, with the greatest increases between 2000 and 2005. 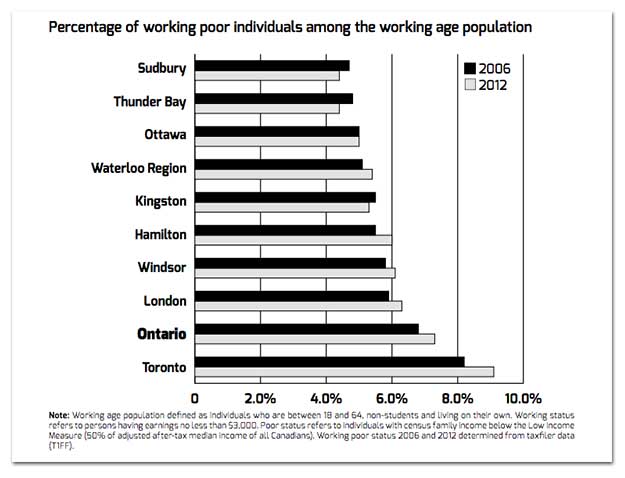 With the rise of the 21st century knowledge economy, the parallel growth of the precarious working poor feels more and more like a throwback to the 19th century instead.

CIBC Report: Canada is 'deteriorating' into a country of low-wage, part-time jobs

Things have gotten steadily worse for young workers in Canada since the 1970s. Here's the proof.