What's the one word Canadians think best describes the economy under the Harper government?

According to a newly released internal report prepared for the bureaucratic arm of the Prime Minister's Office, the magic word that came up during recent focus groups is "uneven":

"Participants were asked to complete a short written exercise about their perception of the current state of the Canadian economy. They were provided with a list of adjectives, either positive, neutral or negative, and asked to select up to three words that best portrayed the state of the economy according to them...

The word most often chosen to describe the Canadian economy was uneven."

The report, prepared by Leger Marketing and submitted to the Privy Council Office in November 2014, sought to peg down "Canadians' perceptions of current events."

Harper repeatedly describes the Canadian economy as "the envy of the world" thanks to an abundance of "full-time, high-paying jobs." But Canadians seem to think otherwise.

The new public-opinion research shows people have a "rather lukewarm outlook on the Canadian economy" with many expressing the feeling that "previous years and decades had brought better paying jobs and benefits but that these good times were mostly gone."

More specifically, many said they have anxieties about "regional disparities" and "the sad state of their local economy":

"Those who chose this qualifier ("uneven") mostly talked about regional disparities across Canada, with some provinces (mainly Western provinces) seen as doing better than provinces in Central and Eastern Canada. Interestingly, this sense was particularly strong in Vancouver and Calgary, where participants felt that a stronger economy across Canada would benefit everyone, including themselves."

And though most had mixed-feelings about the national economy, many rated their local economies even lower:

"There was a clear sense that the local job market was not very strong, with mostly low pay and low benefits jobs on offer. Participants felt that previous years and decades had brought better paying jobs and benefits but that these good times were mostly gone."

In addition to feeling that the winners and losers in the Harper economy are spread unevenly by geography, the pollster noted that Ontarians, in particular, spoke of "social inequality" and the "growing divide between rich and poor."

Respondents took note of how the job market has shifted away from stable full-time jobs (particularly in manufacturing) to unpredictable contract work and part-time service industry jobs:

"Participants from Ontario locations also talked at length about social inequality and how quality jobs were becoming a rarity in their community, creating a growing divide between rich and poor. In all Ontario locations there was a pervasive sense that a large number of full-time quality jobs, mostly in the manufacturing sector, had been replaced by short-term contract work with lower pay and reduced benefits in the service industry."

That feeling of insecurity about the state of Canadian jobs is in line with what others have been saying about Canada's job market for some time.

In January, Broadbent Institue senior policy advisor Andrew Jackson noted that under Harper's management of the economy, "incomes fell the most in hard-hit industrial Ontario. Here's the five cities that have seen the steepest declines in median employment income (between 2006-2012):

And a recent report by CIBC said Canadian job quality has plummeted to a 25-year low: 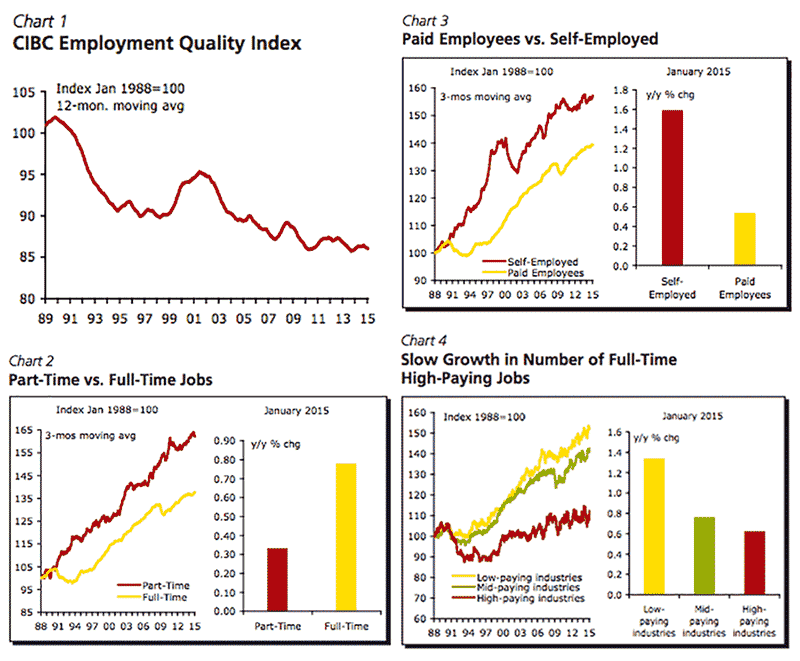