Is Jason Kenney sure he knows what century he's living in? 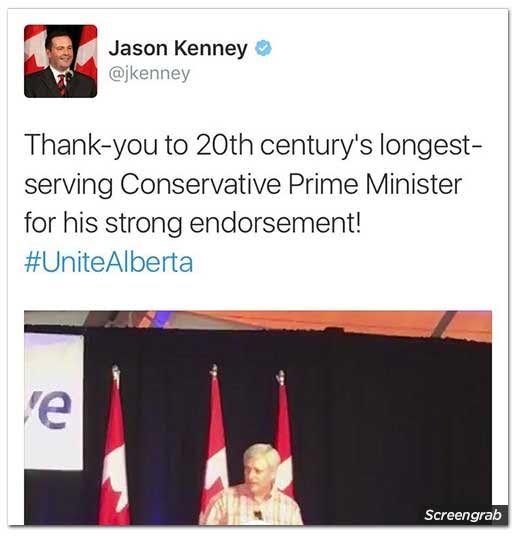 Of course, Harper was Prime Minister from 2006 until 2015. That time range would, in fact, place Harper's Prime Ministership squarely in the 21st century, not the 20th century.

The screw up has a certain poetic irony about it considering Kenney has recently been described as "yesterday's conservative" and as "the type of person who could lead the PCs into the 20th century."

After all, in addition Kenney's old-fashioned social conservativism, his cagey views on women's reproductive rights and bizarre fears about the school system, this is a man who, in only the last few weeks, talked about radical "social engineering" in response to a question about transgender students and warned of "bohemian" youth being seduced by the wiles of communism.

But what makes this all the more remarkable is it actually is not the first time Kenney incorrectly named Harper as a 20th century Prime Minister:

Um ... Kenney has already been reminded that Harper was not PM during the 20th century. https://t.co/joTSqCrydM

In fact, during Kenney's speech launching his leadership bid last week, he made a similar comment about the Harper government belonging to the 20th century:

Which led to these sorts of observations:

I am not the least bit surprised that Jason Kenney thinks it's still the 20th century. https://t.co/7QDZ1MAnX5

Did Kenney just say Harper govt was in 20th century? He actually doesn't know what century it is. #backwards #ableg

And Kenney plans to promise the best 19th century government Alberta has ever had. https://t.co/VPiEsdAPlT

So, it kinda begs the question: is Jason Kenney sure he knows what century he's living in?