What does Jason Kenney really think about climate change?

He proposes to do nothing about controlling greenhouse gas emissions, his campaign manager is a prolific climate change denier (an opinion shaped, in part, by the planet Neptune) plus Kenney has his own creative opinions about carbon dioxide:

@alain_pouliot @FrankPeresta @CanadaAction Co2 is not pollution. Life would cease to exist without it. Our forests breathe Co2.

But considering the Alberta PC leadership hopeful was caught on camera playing footsies with climate change deniers at a meet and greet in Cochrane, Alberta just before the holidays, that might be another reason to scratch your chin and go hmm.

Video from the event shows one supporter warning the former Harper cabinet minister against embracing climate science since that would align him with "the socialists" and their conspiracy to "undermine our free market, capitalist system."

"I grant there appears to be a scientific consensus about anthropogenic climate change," Kenney replied, before dusting off his dog whistle and adding that climate change is a "natural" phenomenon too:

"We all know climate change exists because it's a natural part – the climate's been changing since the beginning of time, right?"

While he speculated "some" of the climate change seen today has probably been "accelerated" by human activities, he also said the question of how much could be an "interesting debate."

Kenney wrapped up by stating teachers should not "indoctrinate" school children with "extreme" views on climate science, pointing to the "gospel truth" of David Suzuki as one thing that has no place in classrooms:

1. Climate change is a natural phenomenon that has happened since the beginning of time.

2. The current climate crisis is caused by a mix of natural and human factors.

3. Climate science is up for "debate."

And despite what Kenney tells his supporters, not only is the science on climate change settled – the consensus view is that "greenhouse gases emitted by human activities are the primary driver."

While Kenney is technically correct that earth's climate has changed over the course of the planet's history, the speed and depth of the current changes make drawing any parallels pointless.

Starting in the nineteenth century and accelerating in the last 30 years, the planet's global temperature has risen dramatically: 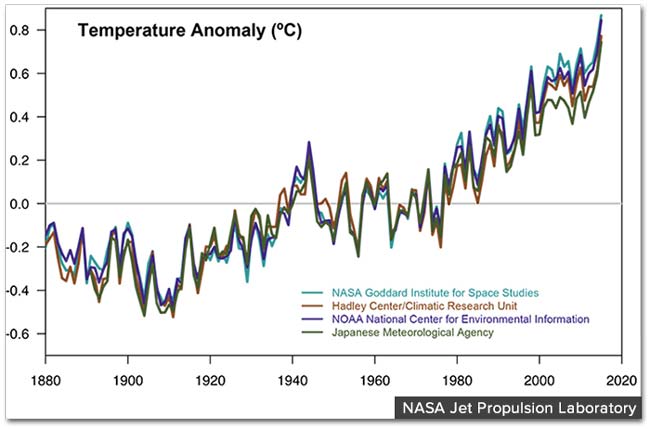 And, once again, this is being driven by greenhouse gas emissions related to human activities.

Going back several hundred thousand years, that looks something like this:

Scientists say carbon dioxide is currently being released into the atmosphere at a rate 10 times greater than it was 66 million years ago during the hottest period in history since the dinosaurs went extinct.

Or as Kenney might put it: "the beginning of time."