Are Kenney's events so underwhelming he needs to invite imaginary friends to fill the room?

Not a stock photo for "political reporting": This an actual photo I took of @EmmaLGraney at a Jason Kenney event. pic.twitter.com/UeY0g5bFa5

You may have spotted something fishy if you were recently surfing the world wide web and stopped for a break at www.jasonkenney.ca.

That's the official website of Unite Alberta Ltd, the private corporation Kenney established with the help of some former Wildrose MLAs to help promote Kenney's "hostile takeover" of Alberta's Progressive Conservatives before the official start of the PC leadership race.

But look closely at the photo welcoming visitors to Kenney's website – what do you see?

Is that a lively photo of a spry and youthful Jason Kenney delivering a speech before a grandstand full of cheering supporters?

But believe it or not, Kenney is full of a lot more than pep in this photo – that's because this photo isn't real, it's fake.

The adoring supporters – apparently stirred to their feet by Kenney's powers of oratory – do not exist.

In reality, Kenney's campaign has selected a photo of Jason Kenney that is eight years old, removed the original background from the photo and replaced it with a photoshopped image of cheering fans.

The original photo was taken at the Conservative Party of Canada's November 2008 Winnipeg Convention by Herman Cheung, who lists himself on the public payroll as manager of new media and marketing in Stephen Harper's Prime Minister's Office back in 2008.

Although that might suggest the decade-old photo was snapped on the taxpayers' dime, the original photo was uploaded to Flickr in 2008 under a Creative Commons license from an account named "mostlyconservative."

While Conservatives do have a particular knack for photoshopped "cookie-cutter branding," there would seem to be little precedent of any Canadian politician using photoshop to create the impression that they're much younger and giving speeches to stadiums full of non-existent supporters.

In the original photo, Kenney is actually standing before a blue backdrop emblazoned with the Conservative Party of Canada's logo, as well as various musical instruments and a half-collapsed microphone stand: 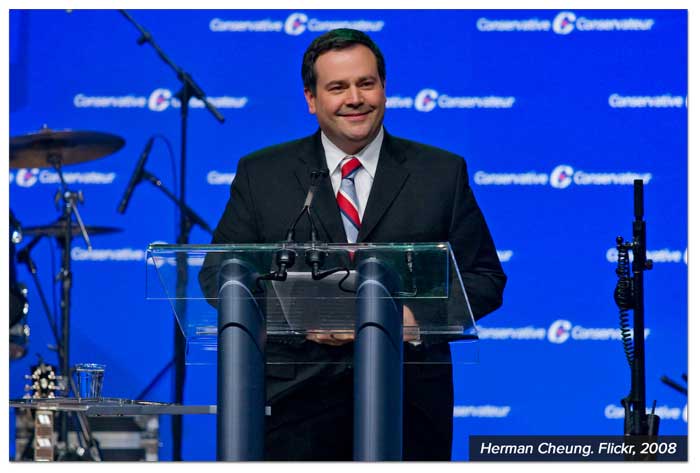 It's also worth noting this is not the first time a "casual viewer" may have been led to false impressions by Kenney's slippery use of photography.

On International Women's Day last year, then-Defence Minister Kenney tweeted a series of "misleading photos" featuring Muslim women being led away in chains to justify the Harper government's airstrikes in Syria and Iraq.

But as Glen McGregor pointed out in the Ottawa Citizen: although a "casual viewer" might think the ex-Defence Minister was tweeting "compelling photographic evidence" of war crimes in Syria and Iraq, in reality Kenney had spread photos of "actors in a play that depicts events said to have occurred 1,300 years ago."

That also echoes the time Kenney's Citizenship and Immigration department organized a fake citizenship ceremony for fake immigrants to swear fake oaths – and broadcast it on Sun TV.

It would later be revealed that the new Canadians featured in Sun TV's 2012 fake citizenship ceremony were actually hastily recruited bureaucrats from Kenney's department. 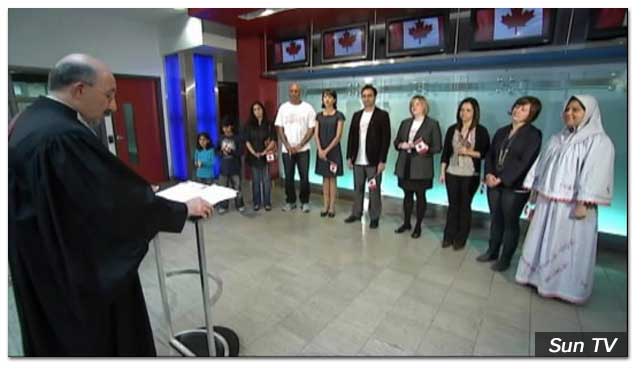 Then again, it does seem as though Kenney's had a long and complicated relationship with the truth, doesn't it? 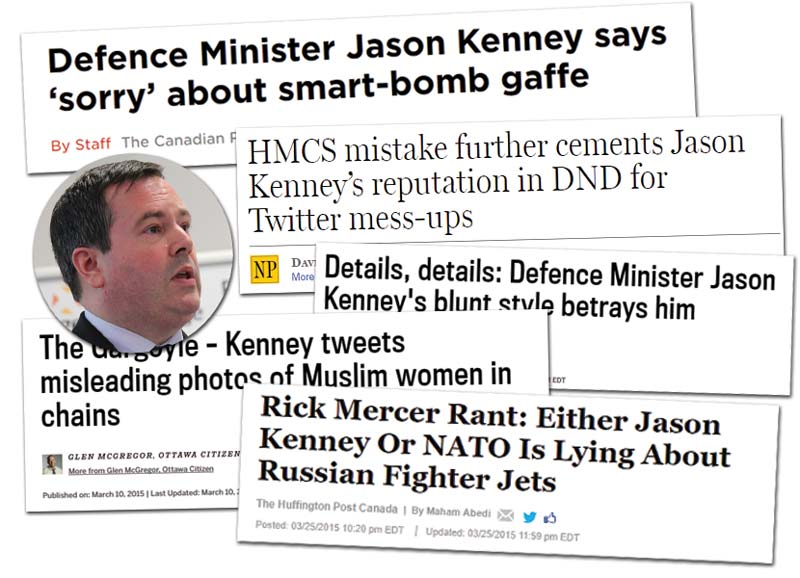