Stephen Harper says a mandatory expansion of the Canada Pension Plan (CPP) is nothing more than a "job-killing payroll tax" rather than a move to avoid a flood of financially insecure seniors falling into poverty.

Instead, Harper – who previously called for scrapping the CPP when he was a Reform MP in the 1990s, even going so far as to call the CPP and Old Age Security "fictitious obligations" – is now floating the idea of a voluntary explansion of the CPP.

Okay. So who agrees with Harper on that?

Not Harper's old Finance Minister, the late Jim Flaherty. He wasn't a fan of "some sort of voluntary new CPP method" as Harper now proposes. Here is what Flaherty said in 2010:

"Mr. Speaker, what the [Liberal Party] actually had suggested in the House was some sort of voluntary new CPP method. This was rejected unanimously by our partners in the federation when we met and discussed the issue because it would not work and because the CPP would be unable to administer it."

Not only that, looking at other countries, Flaherty is said to have thought a voluntary expansion of the CPP would be a "disaster":

"Flaherty dismissed a suggestion from the Liberals that a voluntary contribution fund be added to the CPP. He said that was tried in the United Kingdom and it was a disaster."

And here's what he had to say about the same mandatory expansion of the CPP Harper now demonizes as a job-killing tax:

That minority, Flaherty elaborated, "tend to be middle income or lower income-earning Canadians."

Widely regarded as an effective tool for helping people save for retirement, experts point out the key to the CPP's success is the fact that it is mandatory.

In a 2013 editorial, the Globe and Mail endorsed CPP's expansion calling it "one of the country's great policy successes" but adding that the only problem is "it’s just too small. It’s like the world’s finest twin-sized duvet, trying to cover a king-sized bed."

Despite the rave reviews, Conservatives are now pushing an approach to retirement that would see seniors pull themselves up by their own bootstraps through the voluntary option as well as other measures they claim will help people save privately, such as raising the limit on tax free savings accounts. 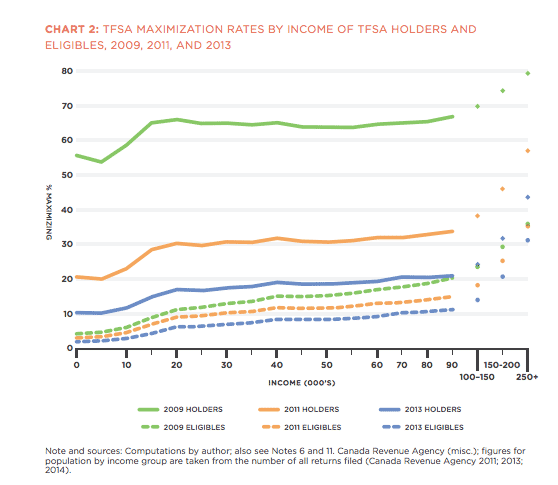 It also shows a relatively small number of Canadians max out or even use TFSA accounts: 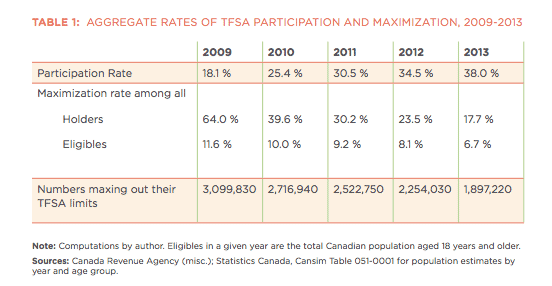 What does that do to strengthen the retirement security for low and middle-income seniors?

What's with all this praise for Jim Flaherty's record?