Kellie Leitch is promoting this book on her website. The author says Leitch's ideas are 'crazy'

Its author says Leitch's ideas are "crazy" and "terrible."

If you've been surfing the world wide web lately, you may have noticed that the Conservative leadership candidate is currently promoting a book about immigration on her campaign's website:

Featured on a page called "Kellie's personal profile," Leitch's campaign includes an image of a book called Points of entry: how Canada's immigration officers decide who gets in.

An image of the book appears below a caption that reads "learn about Canada's immigration system."

Leitch has vowed to bring Donald Trump's "exciting message" to Canada with a proposal to force immigrants to undergo draconian ideological tests for "anti-Canadian values" modeled after Trump's proposal to bring in "extreme vetting" for immigrants – a watered down version of his earlier call for a total ban on Muslim immigrants.

What does the author of the book Leitch uses to justify her anti-immigration policies think about Leitch's proposal?

Author Vic Satzewich says "it's crazy" and a "terrible idea" – he even says he's unsuccessfully requested she stop using his book to "lend academic credibility to her argument."

"In no way shape or form do I ever argue, or will I ever think, that it is a good idea — or even a sensible idea — to test for Canadian values. But that's a conclusion that she draws from (the) observations that I make. That's certainly not my conclusion" ...

"Every year, visa officers process 1.3, 1.4 million visa applications. Can you imagine doing interviews with 1.3 or 1.4 million applicants? It's going to bring the immigration system to a grinding halt," he said.

"We need to screen people to make sure that they have this value of working hard? It's crazy, right?"

And in contrast to Leitch's paranoia, Satzewich adds that having seen "how visa officers work," he has great "confidence in the immigration system."

Before quietly being moved to Leitch's "bio" page last week, the book was actually featured prominently next to a photo of Leitch on the front page of her website – among the first things website visitors see: 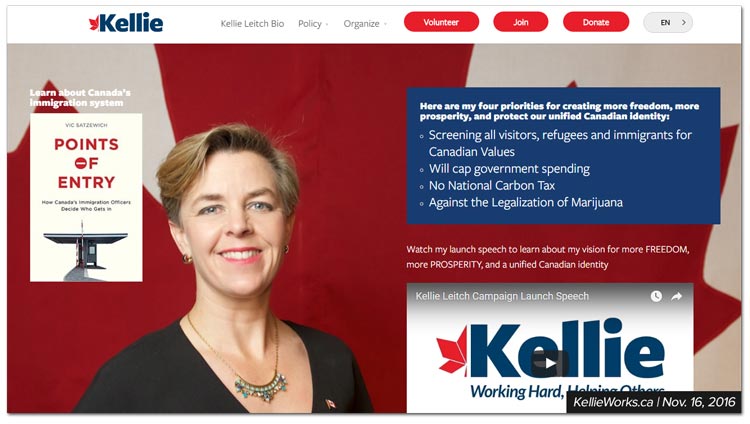 Last week, Leitch lost several key endorsements from high-profile conservatives, while her former staffers have stepped forward to denounce her as a phony opportunist.