Thought Justin Trudeau's Liberals were going to keep their promises?

The NDP, Greens, Bloc Quebecois and yes, even the Conservatives arrived at a multipartisan agreement to put it to a referendum vote.

Only problem? The Liberals don't want anything to do with that consensus.

That's strange, especially considering it was the Liberals who launched the committee to figure out how best to make good on their campaign promise to change the electoral system.

In a supplemental report issued by the Liberals, they instead recommend the Government run out the clock studying the issue further "before proposing specific changes to the current federal voting system," something they point out "cannot be effectively completed before 2019."

In other words, that's the exact opposite of what they said they were going to do last election.

The fraudulence of the Liberal promise on electoral reform is now laid bare. Like so much else in their platform, it was all for show.

1. Criticizing their own time frame

As Prime Minister, I’ll make sure the 2015 election will be the last under first-past-the-post system http://t.co/KvaNbizLH5 #upfordebate

Not only did Trudeau say that during the last election, but he proceeded to repeat the same, statement again and again and again for over a year, even as recently as yesterday:

In fact, the 2015 Liberal election platform was pretty specific on when Canadians could expect electoral reform:

"Within 18 months of forming government, we will introduce legislation to enact electoral reform."

Despite telling Canadians they would introduce legislation on electoral reform in exactly 18 months, the Liberal report now claims this would be "rushed" and "too radical to impose at this time":

"Our position is that the timeline on electoral reform ... is unnecessarily hasty and runs the risk of undermining the legitimacy of the process by racing toward a predetermined deadline."

The Liberals created the special committee for the express purpose of figuring out the best way to implement their "campaign promise" of "ensuring that 2015 will be the last federal election conducted under the first-past-the-post voting system."

Today we deliver on the campaign promise to introduce a motion to establish an all-party committee to study #electoralReform. #CdnDemocracy

On Sunday, Democratic Institutions Minister Maryam Monsef shifted away from their firm promise to end first-past-the-post by claiming the whole point of the process was to find "broad support" – Canadian Press fact checkers say Monsef's claim is "completely inaccurate" and "full of baloney."

The Liberal report claims the committee heard a "large divergence of opinion" and therefore couldn't reach a consensus:

"We found no consensus on a single specific electoral system."

Except the all-party committee actually said the exact opposite – the committee explicitly said an "overwhelming majority" of those they spoke to were in favour of proportional representation:

"The Committee acknowledges that, of those who wanted change, the overwhelming majority of testimony was in favour of proportional representation."

In fact, data from Monsef's electoral reform town halls show a staggering 87% of speakers advocated for proportional representation too.

Not only did Conservative MPs report the same pattern at their town halls – most people at a town hall hosted by Justin Trudeau in his own Papineau riding supported proportional representation too.

When Monsef's national electoral reform tour got under way, the minister branded the town halls as a way of hearing from a diversity of voices across all regions in Canada – including from those who have "not voted in the past":

"I am truly grateful for the tremendous opportunity to go and meet with Canadians from coast-to-coast-to-coast and, most importantly, listen to their views on democracy. I am especially looking forward to hearing from Canadians who have not voted in the past."

And in a September update, Monsef seemed "ecstatic" about the variety of "unique perspectives" she'd heard from:

"I am ecstatic to see this level of interest and engagement among Canadians. With each stop it is more and more apparent that Canadians have a multitude of thoughts and unique perspectives on how Canada’s electoral system can be improved."

Apparently those who took the time to attend Monsef's events aren't real Canadians.

According to the the Liberal report, those town halls were not legitimate because the demographics of the attendees were "not a representative sample of the Canadian population":

"The fact that 95.4% of all respondents indicated they had voted 'on every occasion that [they] have been eligible to vote', it appears that a self-selection bias inadvertently excluded those who were not already engaged in the political process."

Monsef's team organized the events and she said hearing from a diversity of voices was one of her key objectives. So, who's fault was this, exactly?

On June 16, 2015, then-Liberal leader Justin Trudeau said Canada must end first-past-the-post because the current system leaves too many Canadians not feeling like their "voices and votes are valued and valid."

That promise was included in a Liberal document titled "a fair and open government" which declared that "people know Ottawa is broken" and offered electoral reform as a "real change" that could "fix" the broken system: 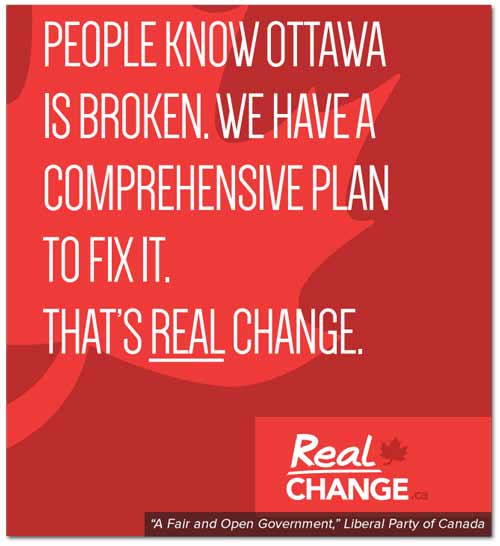 Does Trudeau still think the system devalues and invalidates the "voices and votes" of Canadians?

When a reporter suggested Thursday that maybe Trudeau's Liberals suddenly like the status quo now that they benefit from it, Liberal MP Francis Scarpaleggia chose this way to respond:

Which kinda begs the question: if that's true, then why did they even make the promise in the first place?