The good news is Morneau announced the creation of a new "Canadian Infrastructure Development Bank" that will invest billions of dollars into infrastructure.

The bad news is Morneau is funding the new bank with $15 billion in previously announced spending earmarked for "socially useful, non-commercial projects like child care or affordable housing to cash-strapped cities."

The other bad news is the only projects that will see a dime from the new bank are projects that have "revenue-generating potential" for the government's private sector partners – a scheme to use public funds to subsidize and finance private infrastructure, in other words.

According to Finance Canada, much of the infrastructure spending will be privately-financed, with federal, provincial and municipal governments making up the difference.

Details show the federal government's contribution will be $35 billion, although since the bank will only invest in "revenue-generating" projects, Canadians will possibly pay tolls and other fees to use infrastructure their tax dollars helped finance.

At the same time, the Liberal government says it will redirect $15 billion in previously announced spending that had been specifically earmarked for infrastructure projects relating to public transit, climate change, affordable housing and indigenous communities to projects that generate revenues for private investors.

Other recent reports have suggested the Liberal government is also considering auctioning off public assets, like airports, to recoup costs.

Unlike state investment banks in countries like Germany and Brazil, Canada's newly created infrastructure bank will make investments in projects based on private rather than public interests.

That means private capital now has greater influence on key policy areas like mass transit, affordable housing and environmental infrastructure – key promises from the Liberals' 2015 election platform may not be implemented unless they return a profit for shareholders.

Another problem is financing infrastructure projects with private-led investment is usually more expensive in the long-run.

As the Toronto Star's Thomas Walkom points out:

"The problem with privatization is that it usually ends up costing consumers more. Various auditors general around the world, including Ontario’s, have made that point when examining public-private partnerships." 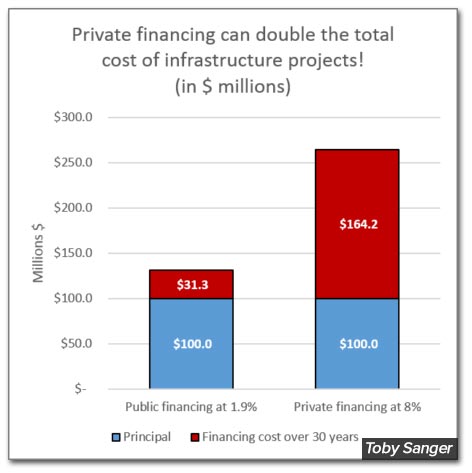 Michael Sabia, CEO of Quebec's  Caisse de dépôts pension fund and one of Morneau's own advisors recently gave a speech championing infrastructure investments for their "stable, predictable returns in the 7 to 9 per cent range with a low risk of capital loss" – suggesting the tab will be a lot bigger than if the government had made the investments itself.

"It doesn't take an economist to understand it makes no sense to finance projects at 7 to 9 percent when you can do so at 2 percent [the current interest rate]. Financing at 2 percent for a $100 million project amortized over 30 years adds $34 million to its cost, while 8 percent adds $165 million: almost five times as much in financing costs and doubling the total cost, including the principal. No sensible person would do this with their own mortgage, nor do so in an obvious way with other peoples' money (OPM) as a politician. That's why they dress these projects up as public-private partnerships, or 'innovative infrastructure financing', as the Advisory Council proposes with this bank."

And if investors are looking for a "7 to 9 percent" return, that profit has to come from somewhere.

For-profit infrastructure that may include tolls and fees? Seems like a real change from the kinds of infrastructure investments the 2015 Liberal platform promised only one short year ago:

"Transit. Roads. Clean energy. Schools. Hospitals. The basic infrastructure our economy needs to grow and we need in order to get ahead."

But hey, at least our tax dollars will help private investors turn a profit.