Don't bank on Wildrose leading a united right because too many Albertans see the party as rural extremists, says an influential Manning Centre director.

Cliff Fryers, Preston Manning's former chief of staff who now sits on the Manning Centre's board of directors, rattled through a list of "weaknesses" and "problems" with uniting the right at the "Alberta Can't Wait" forum in Red Deer last weekend.

Fyers advocates the creation of a third conservative party "that will again dominate the province" for a variety of reasons. He says the PC's have a reputation for being "in the pocket of large corporations and wealthy Albertans," while Wildrose is "bereft" of experience and lacks "depth."

Reacting to the initiative's talk of forming a new party, Wildrose leader Brian Jean said that is "frankly not helpful at all":

"We want to consolidate conservatives, we want to make sure we are the only choice in the next election that there will be a fiscally conservative government in Alberta."

But the Manning Centre director has doubts about whether Wildrose can "consolidate" anything, it seems.

As Fryers sees it, one problem is Wildrose continues to be viewed as an extremist party:

And in addition to being viewed as an extremist party, Fryers added Wildrose is seen as too rural:

"The party is seen as rural and very detached from urban voters. This is one of its problems."

In addition to organizational problems, the one-time Wildrose campaign chairman noted the name of the party could be problematic too, because "the word 'conservative' is not in the party name."

Although he thinks "Wildrose" is a "wonderful name," Fryers said it's "not seen to be as 'commonly conservative'."

The "Alberta Can't Wait" forum was emceed by Manning Foundation director Leah Costello and counts Preston Manning among its "ambassadors," along with several others linked to the Manning Centre or Alberta PCs.

In 2014, Manning helped orchestrate the defections of Wildrose leader Danielle Smith and eight other Wildrose MLAs to Jim Prentice's Progressive Conservatives in another failed bid to unite the right in Alberta.

While the Manning Centre is not formally affiliated with the initiative, they do appear to be a very enthusiastic promoter of the initiative's work: 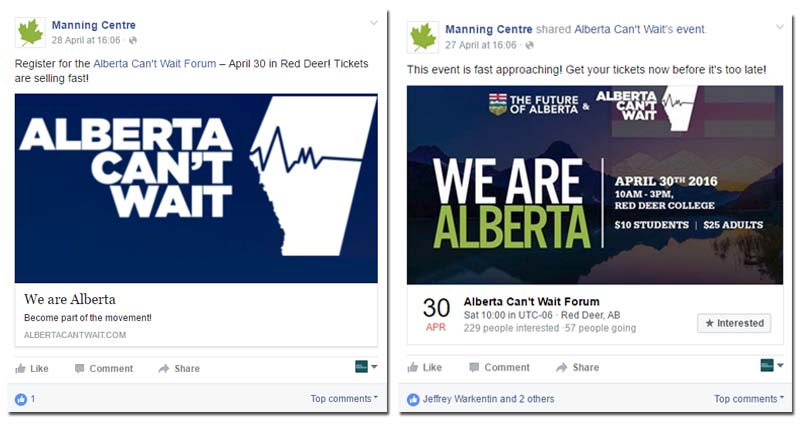 According to Jason Kenney's logic, Stephen Harper and Preston Manning are socialists too