The photo of a ticking time bomb below is featured in a real ad that the Manning Centre, a right-wing think tank named after former Reform Party leader Preston Manning, is currently running on Facebook to promote their annual conference for conservative activists later this month. 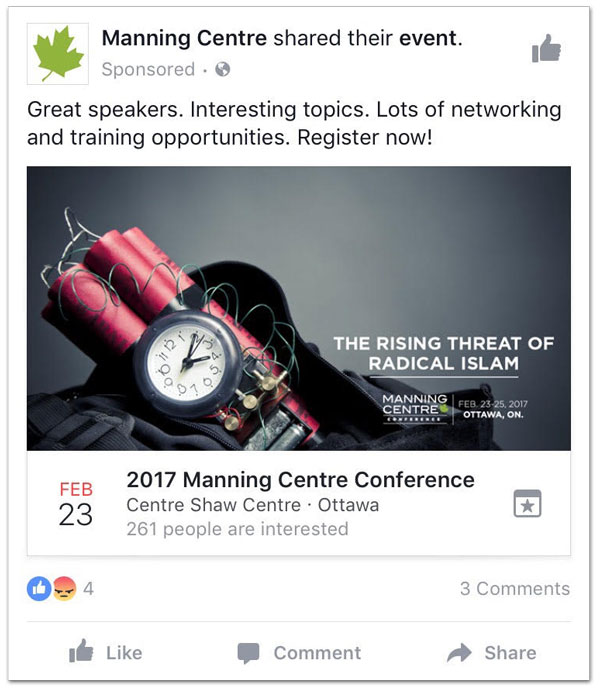 Next to sticks of dynamite wired to an alarm clock, the Manning Centre ad warns of "the rising threat of radical Islam" – all promoting a special conference panel looking at "Islamist extremism."

The 2017 Manning Centre Conference includes panels on topics ranging from privatizing the school system to defunding the CBC. They'll even be hosting a Conservative leadership debate at this year's conference too.

You may wonder if the Manning Centre thinks running this kind of sensationalizing ad one week after a far-right white nationalist murdered six Muslims in a Quebec City mosque is a good idea? The shooting was one of the deadliest terror attacks to ever occur on Canadian soil.

You may also question what this kind of overheated, over-the-top visual rhetoric contributes to a calm, rational and sane discussion about the real problems and real policy solutions connected to extremism?

But the Manning Centre defended their graphic design choices Monday, explaining that the graphic is justified on the grounds that they do not "dismiss 9/11" or the "Paris/Ottawa/London attacks."

@nougatjesus So we should dismiss 9/11, Paris/Ottawa/London attacks? We’ve got a respected Muslim spkr to discuss what to do about the prob.

Just how serious is the Manning Centre about terrorism?

The conference's webpage features a cartoon silhouette of a ball-shaped bomb with a lit fuse – something Wile E. Coyote might use, no doubt.

.@manningcenter disappointing image and lang. In light of Quebec, the topic Needs to be Extremism. Not just targeting 1 religion. https://t.co/QGOhq7zKMr

And here's what Canadians on Twitter had to add:

Disgusting regardless of timing, but following terrorist attack on Quebec mosque & death of six humans, this is abhorrent. #ableg #cdnpoli pic.twitter.com/WslWmDCfXA

I am agog at the utter incompetence of @manningcentre's conference marketing after the lives lost last week in Quebec City. #cdnpoli #ableg https://t.co/Jh86ug05FY

so....
a) Could this possibly be real?
b) If yes, did Kouvalis leave the Leitch campaign to run the @manningcentre ? https://t.co/exdDpEUts7

Shame on the @ManningCentre! This rhetoric only serves to increase the fear and racism we're currently seeing. #cdnpoli #ableg #UniteinPeace https://t.co/FIgYN7jB0V

Not like @manningcentre is stoking the fire. Maybe there should be a stream on radicalizing young white men? #mnc2017 #cdnpoli #abpoli pic.twitter.com/b1KNd3oS5K