But a close look at fundraising records shows Leitch's war on the elites is actually bankrolled by many of Canada's wealthiest and most powerful people – everyone from the CEOs of corporations and big banks to the owners of country clubs, collections agencies, even a guy who bulldozed homes in a working-class neighbourhood to build a bigger parking lot for his Honda dealership.

Using the most recent Elections Canada data covering all donations up to the end of 2016, PressProgress looked at the people who gave Leitch's Conservative leadership campaign the maximum allowable amount under Canada's political financing laws ($1,525).

While Leitch's campaign relies more than others on a "small pool of big-dollar donors," a close look at the names also offers a glimpse at which elite circles are lining up behind Leitch.

For one thing, three-quarters of Leitch's top donors come from Ontario – exactly 50% come from the greater Toronto area alone. 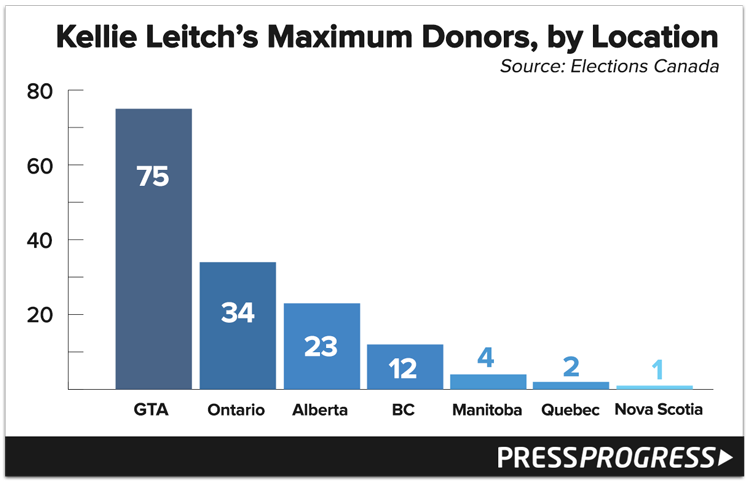 The picture comes further into focus when you also take a look at the backgrounds of top donors.

Leitch's wealthy donors tend to cluster around the financial sector, as well as real estate and corporate law – in total, 28% of Leitch's top donors are CEOs and corporate executives.

Other top donors work in areas such as pharmaceuticals, biomedical supplies and high tech. Only five of Leitch's top donors hailed from the natural resources sector. 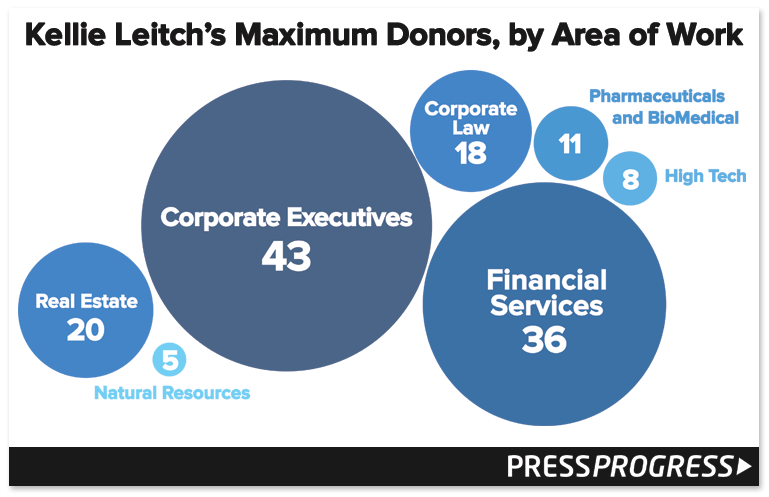 So, half of Leitch's top donors come from Toronto, most are linked to the financial sector, real estate and corporate law and many are CEOs and corporate executives.

No wonder she has money lying around to pay for full page ads on Ezra Levant's Rebel Media website – Leitch's campaign against elites appears to be largely funded by Bay Street's wealthy elite.

Here's a closer look at a few of the big names enabling Leitch's campaign:

Which captain of industry is Kellie Leitch's most elite donor?

Billionaire gas marketer Rebecca MacDonald is one of Canada's richest women (plus, Leitch once appointed her to a prestigious business council), but is she more elite than Morris Goodman, chairman of a billion dollar per year pharmaceutical company? What about Tye Burt, who used to run Kinross Gold, Canada's third biggest mining company?

What about Postmedia chairman Rod Phillips? Not quite as wealthy as the rest, but at least he's a top donor – Postmedia CEO Paul Godfrey only coughed up $100 for Leitch's campaign (maybe he can send her part of his last bonus?).

There's plenty of chaps who can dazzle your next garden party with tips on managing global assets, like RBC's former head of wealth management George Lewis, former TD bank executive Charles Hounsell, along with the leadership team at Moodys Gartner, a Calgary firm specializing in corporate tax law.

Who else? The Globe calls Colleen Moorehead "one of Bay Street's best connected people," Krystal Koo is a high-powered "real estate veep by day, glittery socialite by night" who tops Toronto Life's "best dressed" list and Jennifer Fuhr runs a "Calgary group of high net worth investors" worth $25 billion in assets.

Wonder if they feel they've gotten a good return on their investment?

Conservative insiders with long ties to Brian Mulroney and the Ontario Tory establishment? How much more elite can you get?

Hal Jackman: a former Ontario Lieutenant Governor and ex-Chancellor of the University of Toronto who made his money running Empire Life financial, Jackman was also a longtime fundraiser for the old Progressive Conservatives. According to Forbes, Jackman is currently worth one and a half billion dollars and is one of Canada's 100 richest people.

Paul Curley: former advisor to Brian Mulroney, national chair of the federal Tories and president of the Albany Club, he's been said to "hold more IOUs than a finance company."

Kenneth Zeise: insurance lawyer by day, Zeise has been moonlighting as an Ontario PC executive for the last 20 years.

Consiglio Di Nino: a corporate executive Brian Mulroney appointed to the Senate in 1991. 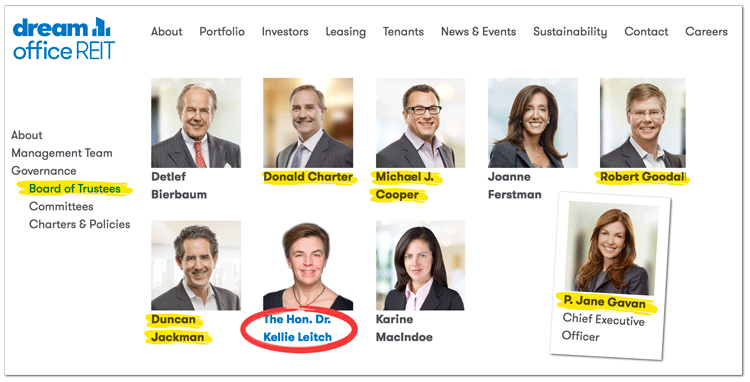 Speaking of elite circles, there's also the Board of Trustees Leitch and several very wealthy businesspeople serve on.

According to documents filed with Canada's Ethics Commissioner, Leitch is a member of the Board of Trustees for Dream Office REIT – a real estate firm that leases office space to businesses across Canada.

It turns out some of Leitch's Dream Office co-workers are also some of her top donors: CEO Jane Gavan chipped in. So did Donald Charter, also chairman of a company that mines for gold, Robert Goodall, a multibillion dollar mortgage lender, and real estate mogul Michael Cooper – he recently bought one of Toronto's tallest buildings for $1.3 billion.

Also on the board is Duncan Jackman, whom the National Post once described as "one of the country's most eligible bachelors." He only gave Leitch $755, but he's also the son of billionaire conservative insider and top Leitch donor Hal Jackman.

Leitch's only top donor from Nova Scotia is Robert Steele, whom Vice described as Halifax's "Chad-Krogeresque multi-millionaire auto oligarch" when he triggered a local uprising last year after buying rows of hundred year old homes in a north-end working-class neighbourhood and tore them down to build a bigger parking lot for his Honda dealership.

Meanwhile, Konstantin Toubis made a name for himself during the 2015 federal election when PressProgress discovered the Conservative candidate was sharing Russian-language articles on Facebook offering crude and misogynistic advice on drunk women, homosexuality and "being a man." 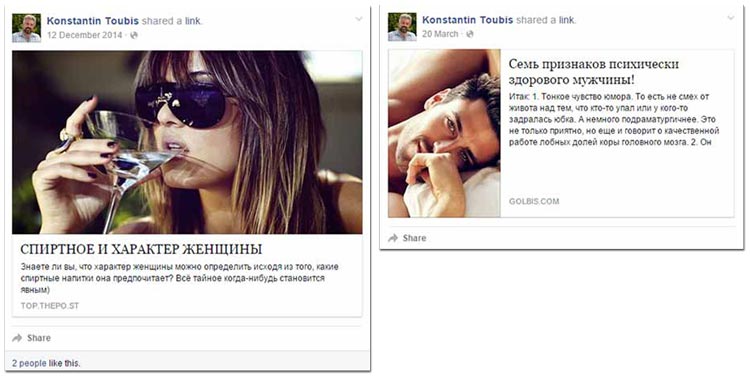 Another top donor worth a mention is Rominder Bhatha, a Vancouver business owner who told CBC Radio's The Current he works on Leitch's leadership campaign as volunteer.

He also maintains a pretty eye-catching Facebook account, replete with Rebel Media articles praising Leitch and memes demanding "no Islam in school – at any level."

Bhatha's public profile shows he follows a number of far-right organizations, including Soldiers of Odin and the Christian Defence League – who happen to be labelled hate groups by the Southern Poverty Law Center, the Anti-Defamation League and B'Nai Brith Canada – as well as a far-right anti-immigrant group that endorsed Leitch's leadership bid earlier this year. 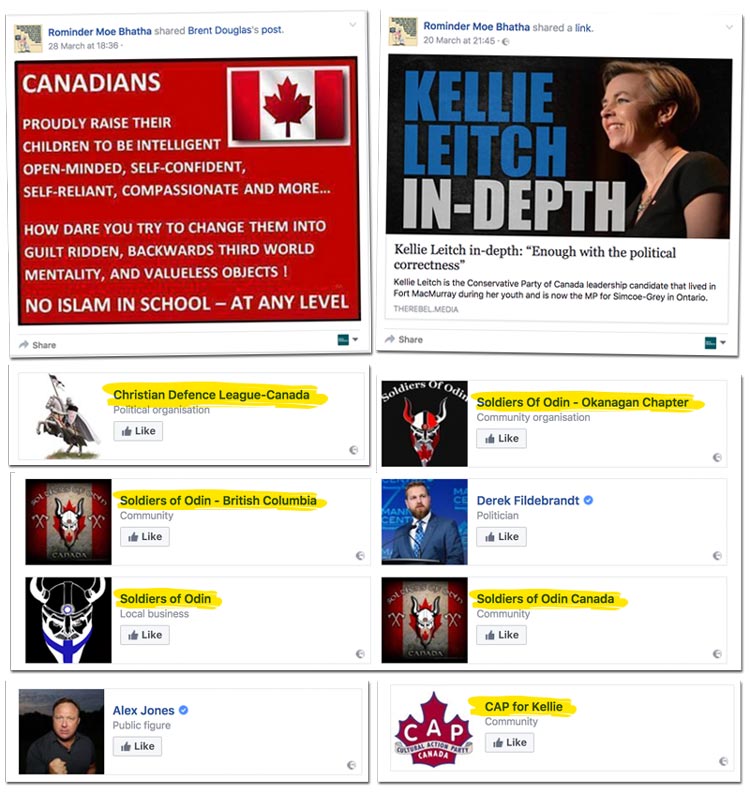 Sounds like Leitch's campaign is attracting all kinds of interesting people!