Did you see the headlines?

Staggering claims! But is any of it true? Like, even close to true?

As was pointed out last year, the right-wing Fraser Institute's claim that Canadian families spend more on taxes than "food" and "shelter" is a staggering claim supported by many methodological problems and things that don't quite square with common sense.

• To reach their magic number for the average Canadian family's tax bill, the Fraser Institute takes all the tax revenues collected by all governments in Canada and divides it by the number of households. That's it?

• The Fraser Institute's magical number does not represent how much the average Canadian family pays in income tax each year – it also includes "indirect taxes" which, according to the Institute, includes corporate income taxes, business property taxes and natural resource levies.

Does your family pay a multinational oil company's taxes? Here is what former editor of The Walrus John MacFarlane wrote last year about the Institute's outlandish claim:

"Critics of the Fraser Institute report have also pointed to a bias in its definition of taxes, in terms of what it included in its calculation of the average tax bill. Are royalties on oil and gas revenues taxes? Are import duties taxes? Are taxes on goods and services, property, vehicles, fuel, alcohol, and tobacco — so-called consumption taxes — as burdensome as those applied to income? Is it reasonable to include corporate taxes in the total that Canadian families pay?"

• 2012 data from the Organization for Economic Co-Operation and Development pegs Canadian taxes from all conceivable sources at round 31% of GDP, which by their logic should be closer to the tax bill of the average Canadian family.

• According to the same Statistics Canada data cited by the Fraser Institute, only 17.5% of the average Canadian household's total expenses are spent on income taxes.

• The Fraser Institute also claims "all types of taxes" on families are increasing "faster than the cost of basic necessities," up by 1,866% since 1961, yet the latest OECD numbers show taxes have declined by more than 5% of GDP since 1998 and, by their own numbers, by 4.5% since 2000. 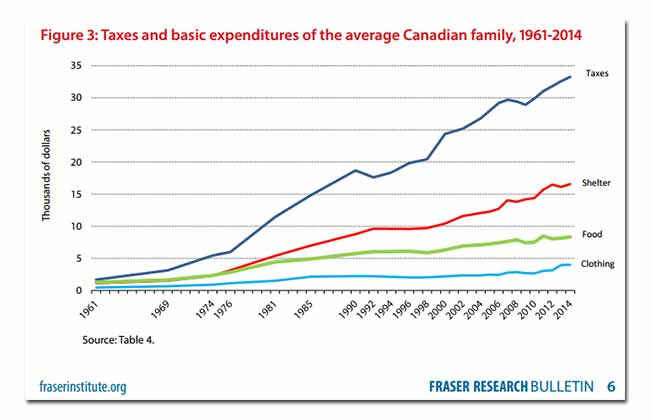 The Fraser Institute also forgets to mention that if the goal is to get us back to 1961 levels of taxation (why do they want to return to 1961? Who knows), that probably means privatizing healthcare, laying off police and fire fighters, scrapping pensions, making little freeloaders like Billy and Sally pay their own way through kindergarten, or heck, maybe even defund the CBC!

Unless, of course, that is what the Fraser Institute really wants?