Shhh -- listen. Can you hear that?

You don't hear anything? That's because you're listening to the sound of the Canadian economy slowing to a standstill.

According to the latest jobs update from Statistics Canada released Friday, full-time jobs are down and part-time, precarious, low-quality jobs are up.

But if anyone runs into Finance Minister Joe Oliver (he's a glass half full kind of guy -- he thinks Canada's nose-diving economy is the "envy of the world") between now and the budget, here's 7 things you might want to ask him about:

Hardly reason for Oliver to proclaim "the crisis is over" on Wednesday. And this after Thursday’s OECD report -- which anticipates turning points in economic activity -- had Canada's economy lagging behind most of the G7.

While 29,000 net new jobs were created in March, that upswing was driven by the creation of 57,000 part-time jobs. 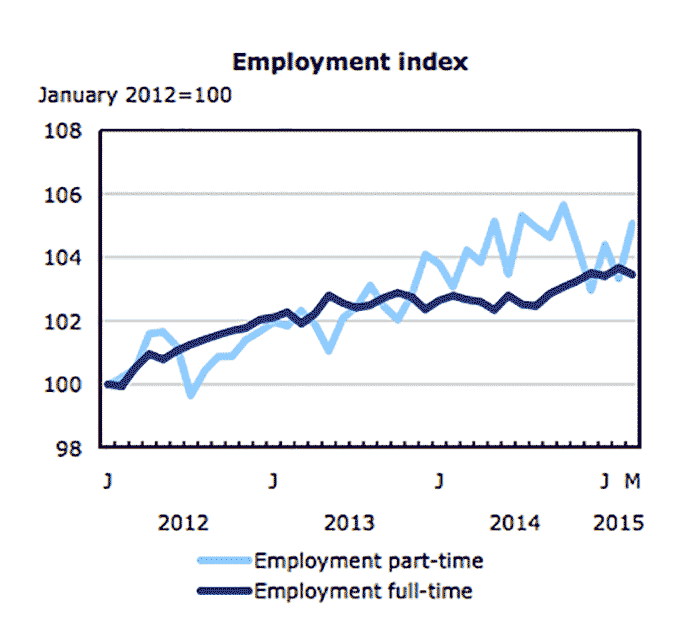 The StatsCan report found two-third of the paid jobs created in the last 12 months were in the public sector (a 0.7% increase) -- while private sector jobs only increased by 0.2%, said Erin Weir, an economist with the United Steelworkers, in a statement to the media.

Wednesday was probably also a bad time for Oliver to brag about the government creating jobs that are "full-time, private sector, and in high-wage industries."

3. Most Canadians already think the economy is in trouble

No wonder 67% of Canadians say the country is already in an economic recession or depression, according to recent EKOS poll for iPolitics.

The share of working people actually fell 61.4% in March.

Having a job is good, but how good is it if your employer doesn't give you enough hours to make ends meet? Total hours worked fell 0.3% from February to March. Weir explains:

"So, employers are paying Canadians for fewer hours of work, even if those hours are divided up between more part-time jobs. Total hours have essentially been flat over the past year.

"Shorter working time would be desirable if it were distributed equitably among employees and accompanied by appreciable increases in hourly pay. Unfortunately, we are instead seeing more Canadians stuck in low-paid, part-time work."

6. Manufacturing got worse, not better

Many economists -- and even banks -- had thought the lower Canadian dollar and low price of oil might help boost Canadian manufacturing. But StatsCan showed that sector continues to decline: 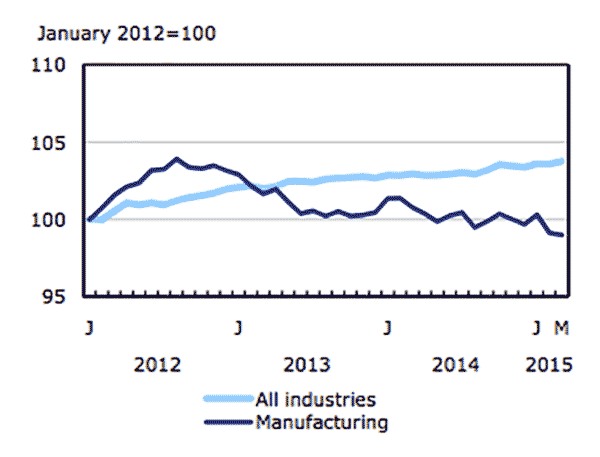 7. Businesses say they aren't planning to create jobs this year

The latest Bank of Canada Business Outlook Survey found Canadian companies less likely to add staff over the next 12 months.

5 Things You Don't Know About Minimum Wage Workers in Canada