What does the Fraser Institute have against positive economic benefits?

Although the right-wing think tank has pulled every trick in the book trying to scare Canadians about what will happen if you raise the minimum wage, a new academic study suggests a $15 minimum wage has a "positive effect" on workers and businesses instead.

That's a far cry from the Fraser Institute's fears of "large job losses" for the millions of "affluent" teenagers the right-wing think tank falsely claims make up the majority of low-wage workers.

The Fraser Institute, which also believes Mary Poppins is communist propaganda, has claimed "increasing the minimum wage negatively impacts employment" and that the "minimum wage experiment" has "failed."

But it seems a team of economists from the University of California Berkeley disagrees – and their new study adds to a growing mountain of evidence challenging these right-wing economic myths.

Modelling how workers, businesses and consumers will respond to California's $15 minimum wage increase (set to go into effect in 2023) in Fresno County, one of California's poorest areas, the researchers at UC Berkeley's Minimum Wage Research Group say it will lead to a "major improvement in living standards" and ultimately have a "positive effect on employment." 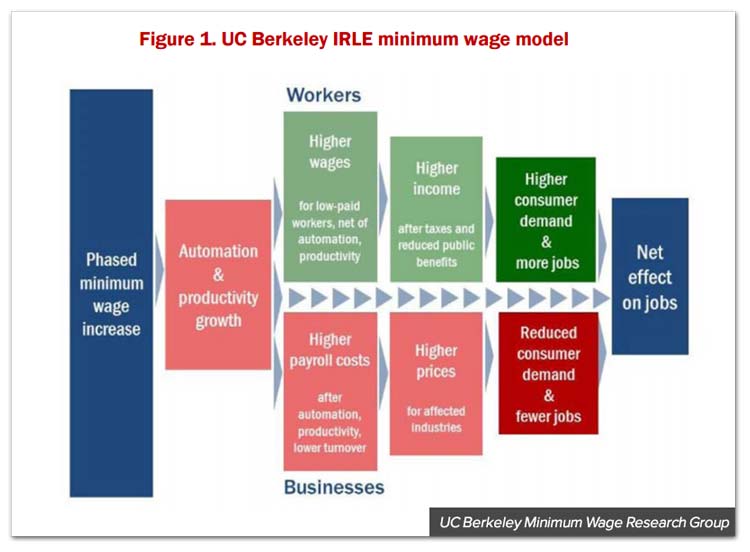 Although the researchers note that the increase will "generate both negative and positive employment effects," their model shows the impact of raising the minimum wage in and of itself will increase employment by 0.1%. They found it will also "generate a significant increase in earnings for about 5.26 million workers," meaning "increased spending power" for low-wage workers

They add that other "downstream benefits" will include "improved health outcomes for both workers and their children" as well as "increases in children's school achievement and cognitive and behavioural outcomes."

Businesses, on the other hand, will absorb a 2.8% payroll cost, but the researchers explain that those costs will ultimately be recouped through savings on employee turnover, increased productivity and other efficiencies:

"The law would result in substantial benefits to low-wage workers and their families, raising wages for 5.26 million workers by 2023. Annual pay for these workers will increase by 25.4 percent or $3,900 by 2023 ... Businesses will absorb the additional payroll costs partly through savings on employee turnover costs, higher worker productivity gains, and some automation."

As for consumers, the researchers project prices would increase by 0.6% for retail outlets and 5.1% for restaurants by 2023 – they also add that "positive effects on increased consumer spending from workers receiving wage increases will offset" any effects from slight price increases.

In Canada, the minimum wage varies from province-to-province. Alberta is currently set to phase-in a $15/hr minimum wage by 2018.