And as a matter of fact, despite a wide expert consensus that says there's a serious problem, the Fraser Institute claims Canada isn't facing a looming retirement savings crisis either.

That's what the right-wing think tank argues in their latest report that points out "five myths" about the CPP by introducing a series of misleading and confusing arguments that cloud up discussions about your retirement savings.

1. Denying the existence of a problem

Studies by many academics, a former top Statistics Canada statistician, labour unions, CIBC, the Broadbent Institute and even the right-leaning CD Howe Institute have all come to the same conclusion: yes, Canada is facing a looming problem with retirement saving.

Yet the Fraser Institute claims it is a "myth" that Canadians aren't "saving enough for retirement."

Their evidence? They point out Canadians, in general, hold trillions of dollars in real estate, stocks and bonds, even though that isn't "retirement income," per se.

Of course, the Fraser Institute doesn't mention Canada's wealthiest 20% hold more than two-thirds of that wealth, half of middle-income earners are expected to have serious trouble saving for retirement and many Canadian households have less than one years' income saved away for retirement, regardless of income: 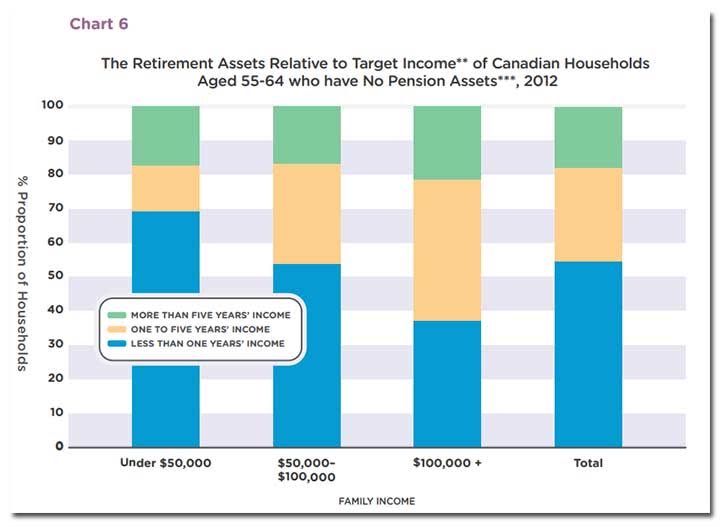 2. Claiming solving the problem is a problem

Many think the CPP is stronger and more secure than RRSPs, but don't tell that to the Fraser Institute.

According to the Fraser Institute, expanding the CPP will cause Canadians to "simply reduce their private savings."

Is that true? For one thing, a 2015 study by on Statistics Canada looking at whether workplace pensions "crowd out" other forms of retirement savings found evidence of some decrease, but on the whole, the evidence shows "employer-assisted saving" leads to "greater wealth accumulation" for workers.

For another thing, one of Canada's leading experts in public finance has previously said he thinks the Fraser Institute's research on this topic is "riddled with basic errors":

"Researchers at the Fraser Institute have reported on their 'preliminary' finding that expanding benefits under the Canada Pension Plan would lead to reduced savings in RRSPs, thereby weakening the total increase in retirement savings.

An interesting finding if true — but unfortunately their study is so riddled with basic errors that it would fail an undergraduate course in research design and statistics."

So, you know, that's something to keep in mind too.

3. Wildly exaggerating the cost of the CPP

The Fraser Institute also wants to challenge the idea that "the CPP is a low-cost pension plan" and they make their case by claiming it's $2 billion more expensive than what's officially reported.

To arrive at this exaggerated, over-inflated number, the Fraser Institute lumps in administrative costs, a claim one group of experts observed "makes no sense."

According to KPA Services, "the primary driver of member services/administration costs is the number of members in the plan, not the asset size of the plan."

Another funny thing is the Fraser Institute has previously admitted that the CPP actually has the lowest administrative cost per member. Here's a little trip down memory lane: 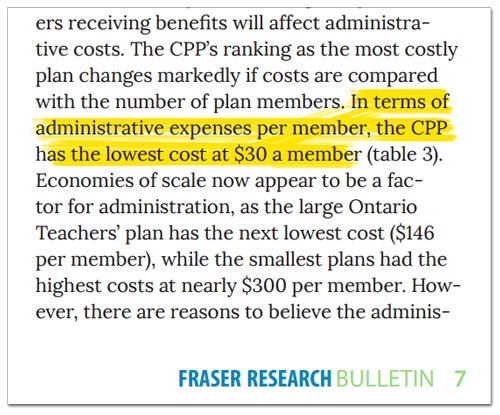 Although the CPP delivers a "strong performance," the Fraser Institute informs us, this "does not directly translate into a greater retirement benefit for Canadian workers," pointing out CPP retirement benefits "varies consierably depending on when the worker was born or retired."

Why is this misleading?

Well, the CPP was established in 1965. So, if you're "a worker born in 1905 who retired at age 65 in 1970," which is an example the Fraser Institute actually uses, you got full CPP benefits despite only paying in to the plan for the last five years of your career.

Those born after the CPP was established, have to contribute throughout their entire careers.

So, because a 60 year old in 1965 paid into the CPP for only five years whereas everyone after contributed throughout their entire career, the Fraser Institute sees this as proof that rates of returns have "declined." 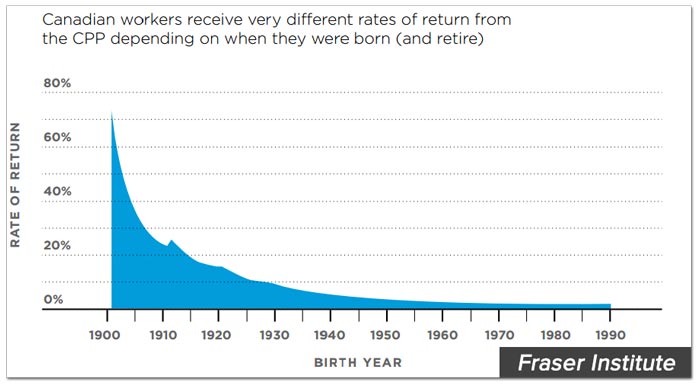 And the Fraser Institute claims expanding the CPP will "do little to help low-income single seniors" because some may have been unemployed and never contributed to the CPP in the first place.

While a CPP expansion will benefit all Canadians as a whole, a better way to target the specific kinds of people the Fraser Institute is talking about is through Old Age Security (OAS) and Guaranteed Income Supplement (GIS) retirement benefits. The CPP is not exactly designed as a poverty reduction tool.

So what's the Fraser Institute's solution? The voluntary savings options they prefer have done nothing to address seniors' poverty either.

On the other hand, maybe it doesn't matter, considering the Fraser Institute also thinks "the problem of poverty among the elderly ... has largely been eliminated."

According to Statistics Canada, over 700,000 Canadian seniors are currently living in poverty.