OECD Study: The gap between Canada's rich and poor is significantly bigger than previously thought

It looks like inequality in Canada is much higher than previously thought.

A recent study published by the Organisation for Economic Co-operation and Development, a major voice on global economic policy representing 34 developed countries, suggests past measures of inequality have failed to capture the true scale of the growing gap between the rich and the poor.

The study, authored by OECD economists Nicolas Ruiz and Nicolas Woloszko, explains that past measures of income inequality relied on data from household surveys that, although useful, are "well-known" to under-report top incomes, something that "can lead to [a] large bias in the measurement of inequality."

To get a clearer picture of how rich the wealthy truly are, the OECD looked at tax data to fill in the gaps for top incomes. 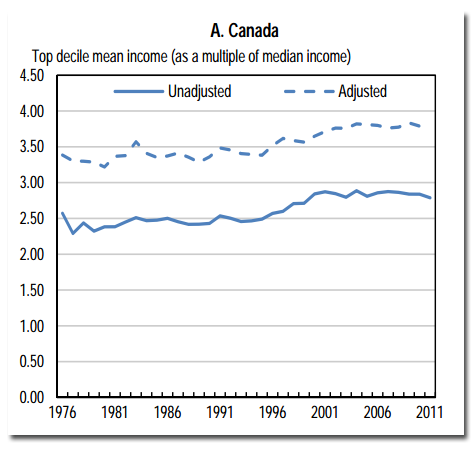 The same also rings true of top earners around the world.

"The results point to a significant increase of the level of inequality measured by standard statistics based on official figures," the OECD study concludes.

Using the Gini coefficient (a commonly used measure of inequality), the OECD finds inequality in Canada ranks slightly above the average in other OECD countries: 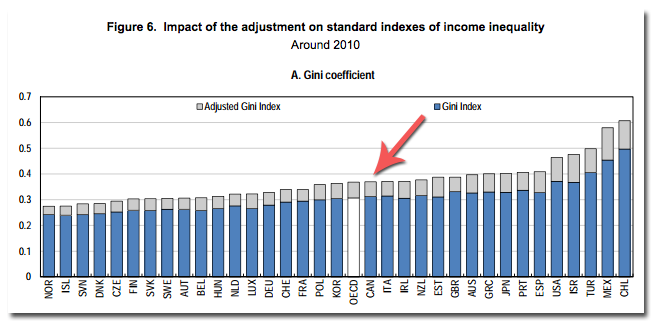 A 2014 survey commissioned by the Broadbent Institute found Canadians "vastly underestimate how skewed the distribution of wealth actually is."

Apparently the income gap is bigger than previously thought too.