Despite the pleas of farmers, it sounds like the Canadian Wheat Board might not be coming back.

Earlier this week the Canadian Wheat Board Alliance, an organization that represents grain producers in Manitoba and Saskatchewan, called on the Liberal government to restore the board and its cooperative sale of wheat and barley.

Harper's Conservatives dismantled the board in 2012 through the misleadingly named "Marketing Freedom for Grain Farmers Act", despite a majority of farmers expressing a clear preference for keeping it in a democratic vote. In April 2015, a controlling stake was  to a joint venture consisting of US and Saudi agribusiness companies.

According to the Alliance, the destruction of the board and its absorption by agribusiness giants has cost farmers a whopping $6.5 billion in income over the past two years alone.

The Canadian Wheat Board was established during the Great Depression to protect farmers and their communities from fluctuations in volatile markets.

Through its "single desk system" farmers sold their crops to the board which, in turn, sold them on international markets and returned the profits to the producers. In this way, farmers were guaranteed a fair price for their grain regardless of whether its international value rose or fell. From 1998 until its dismantling, the CWB was governed by a 15-member board of directors, 10 of whom were directly elected by farmers.

In 2011-2012 alone, the Board sold $7.2-billion worth of grain to more than 70 countries, the majority of which was paid back directly to producers.

But in recent years, farmers have seen their share of the profits from the grain they produce steadily reduced as democratic control has been lost and the marketing and sale of that grain has been taken over by transnational conglomerates.

The Alliance demonstrates that the shift in 2014 alone was considerable: 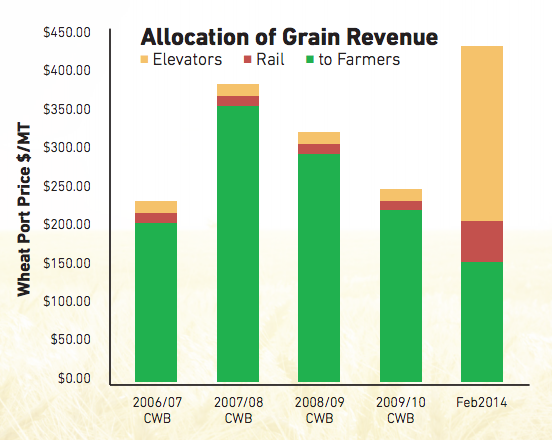 "Marketing freedom", in other words, has turned out to mean less income for farmers and more for large agribusiness companies. And, with their democratically-elected board gone, farmers now have no way of exerting influence over their own industry.

Conservative efforts to privatize the Wheat Board were strongly opposed by both the NDP and the Liberals, who even appealed to the Governor-General to block the legislation.

A search on OpenParliament.ca finds that Liberal MPs raised the issue of the Wheat Board in the House of Commons more than 300 times between January, 2011 and the election call last summer.

Several Liberal MPs were particularly vocal about the destruction of the Wheat Board and supportive of the farmers who wanted to keep it in the years leading up to the 2015 election.

Off to the Canadian Wheat Board meeting - Let's support our farmers!!#cdnpoli

Proud to stand with farmers on Parliament Hill today to defend their right to decide the future of the Wheat Board pic.twitter.com/XxAlLV86

The full chart on grain prices & how farmers loos as a result of Ritz destroying the Canadian Wheat Board. #CdnAg pic.twitter.com/Lvl66wTESb

In remarks posted on his blog, Saskatchewan MP Ralph Goodale was completely unequivocal about Conservative plans to privatize the Wheat Board, writing:

The elimination of the Canadian Wheat Board has been the American’s [sic] Number One trade objective in North America for the past 30 years. The US is about to get its fondest wish. And Canada will get absolutely nothing in return.

But asked Tuesday if the government would restore the Canadian Wheat Board the Minister of Agriculture had only this to say:

Mr. Speaker, the commercialization of the Canadian Wheat Board was completed under the previous government. G3 Canada Limited is now a fully independent commercial entity that is operating in the competitive grain-handling business with no ties to government.