Canadian retailers are expecting billions in revenue this holiday shopping season, but the low-paid retail clerks and cashiers who ring in those sales might wish their employers left their stockings a little fuller.

Nearly two million Canadians will be working in the retail sector this holiday season and one-fifth of those workers earn the minimum wage – a number that has almost doubled since the late 1990s.

But this doesn't need to be the case for retail workers.

In Sweden, 90% of workplaces are covered by collective bargaining agreements and 60% of retail workers are unionized – Swedish retail workers earn 40% more than Canadian retail workers, they receive greater overtime pay for working holidays and weekends and they also receive five weeks paid vacation too.

And although more Canadians now work in retail than any other sector, only 12% of retail workers belong to a union. 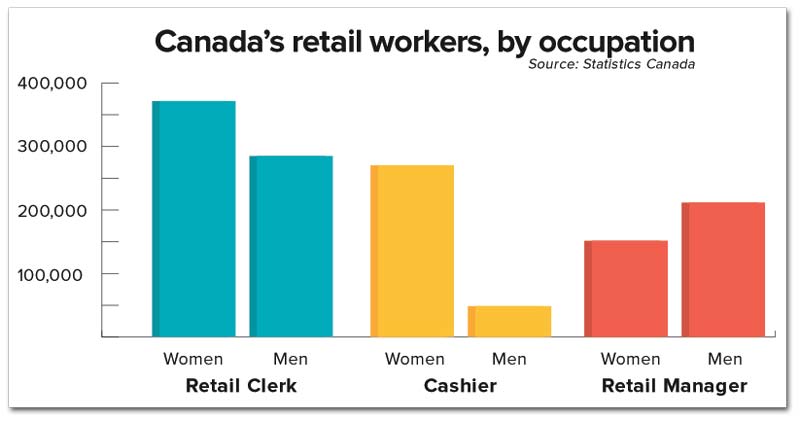 A recent CIBC report warned the quality of jobs in Canada are "deteriorating," with more and more Canadians finding themselves in low-paying part-time jobs.

The growth of precarious retail jobs also coincides with the decline of unionized manufacturing jobs, particularly in Ontario where the manufacturing sector shed 300,000 jobs between 2004 and 2012 alone.

These shifts are also driving inequality within Canadian cities too – not only between knowledge and service sector workers, but within the retail sector as well.

Social policy expert John Stapleton notes that while high-end retailers (Nordstrom and Saks) and low-end retailers (Dollarama) are "booming" in Toronto, middle-end retailers (Target, Sears, Future Shop) have been "turned into a wasteland because an anemic demographic cannot support what it's selling."

Not only does that help explain the growth of the "working poor" in Canada's cities – it could help explain why some analysts are predicting this year's holiday retail sales will be "fairly flat" compared to previous years.