Cover your ears and avert your eyes, children!

Canada's biggest pro-life group says Ontario's government will harm young children by introducing a "radical" new sexual education curriculum in 2015 -- one largely based on an update the government first considered in 2010.

Campaign Life Coalition says Ontario's new curriculum will “normalize homosexual family structures” and could cause "serious sexual confusion in the minds of children." 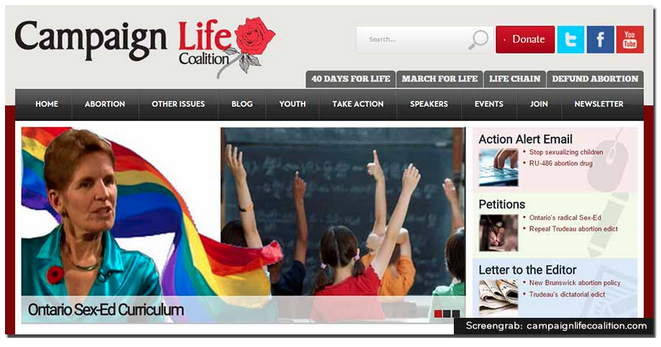 What facts does Campaign Life bring to the table? Take a look at the evidence they unearthed:

The proposed 2010 curriculum introduces children at the cusp of puberty to "the idea of being 'more than just friends' and 'going out' with classmates whom they may 'like'." Campaign Life somehow takes the concept of "romantic dating" and connects a few dots all the way to "unsavoury" groups who promote S&M and bondage: 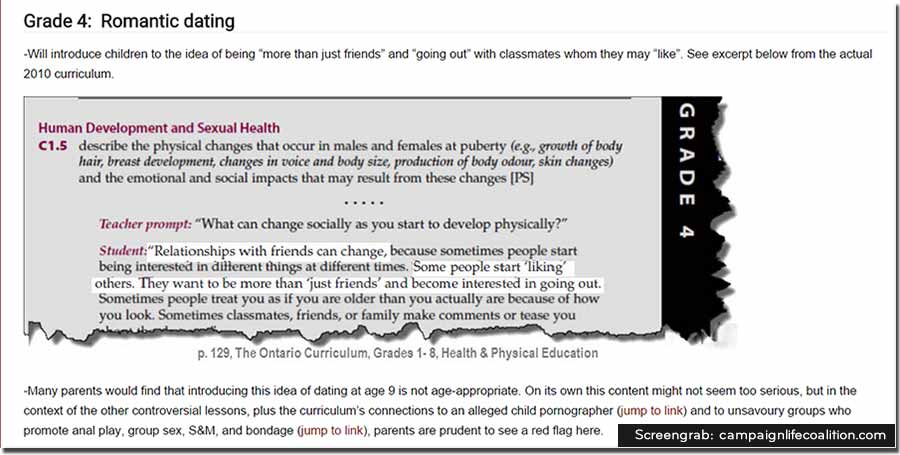 Did you know that teaching kids about what "different families" look like, or the idea that "each person" is "unique," is all a ploy to pull the wool over children's eyes? Campaign Life caught that one, too:

And it doesn't stop there.

Apparently, it isn't good enough to tell kids to abstain from sex, because just by talking about sex you're reminding kids that sex exists.

(And for those who'd like to hear from a health authority on the matter, see here.)

Social conservatives have long opposed the Ontario government's plans to update the sexual education curriculum – former premier Dalton McGuinty backed down from making changes in 2010 when he was attacked by a small and vocal group of Christian parent groups and got "cold feet and left our students using outdated materials," as NDP education critic Peter Tabuns put it.

Ontario's current sex-ed curriulum  (in place since it was implemented by the Mike Harris government in 1998) has been called "the most outdated sex education and health curriculum in the country" and the Ontario Physical and Health Education Association says "youth are being left to fill in some important gaps on their own."

With the new curriculum set to be introduced in classrooms this fall, the same conservative opposition groups are back demanding Ontario "stop corrupting children."

For one parent's articulate endorsement of the new curriculum, read Today's Parent.

OPHEAs report on Sexual Health Education in Schools Across Canada shows that Ontario’s current curriculum lags far behind other Canadian provinces – even among those seen to lean towards more conservative values like Alberta and Saskatchewan.

Here's how they break down key differences between the current 1998 curriculum and the one proposed in 2010, and where other provinces stand:

Considered an important lesson so that students can communicate clearly in case of injury or abuse:

At issue is making sure students "learned factual information before they reached an age where they were likely to need the information to make decisions about their health and well-being."

What the fact gay rights