Yiannopoulos, who resigned as senior editor of the Breitbart Tuesday, has been disinvited from delivering the keynote speech at a major conference for American conservatives, he's had a $250,000 book deal cancelled and he's been denounced by his own Editor-in-Chief at Breitbart after multiple videos surfaced this weekend showing the alt-right YouTube celebrity promoting controversial views on pedophilia.

In one video, Yiannopoulos says sexual relationships between "younger boys and older men" can be "hugely positive experiences for those young boys" and describes attending parties in Hollywood where he witnessed "very young" boys "having unsafe sex with older men."

But in a pair of tweets Monday night, Southern dismissed the "moral outrage" as a "manufactured hit job" by "the establishment." 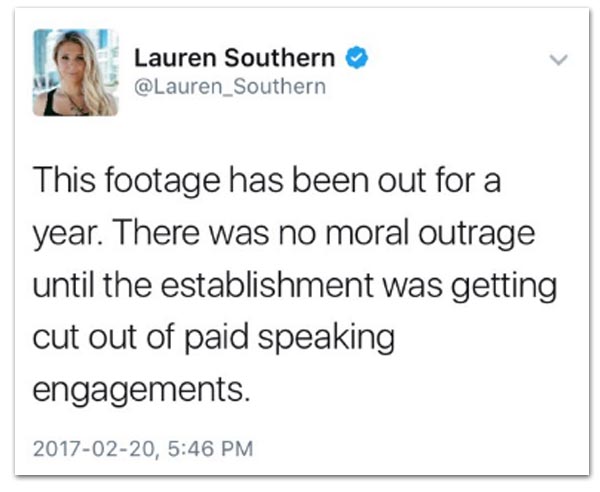 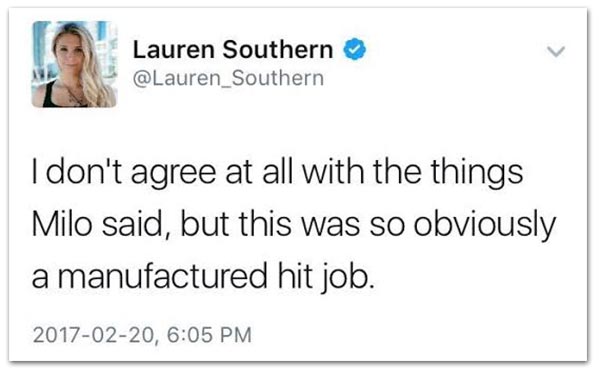 Southern would later delete both tweets – an uncharacteristic show of restraint from someone known to call her critics "faggots" and argue that Hitler was not a fascist.

But another thing remains: Southern retweeted a conspiracy theory sourced from 4Chan, an online community often associated with the alt-right, claiming a "whistleblower" had predicted the left-wing mainstream media and George Soros would team up to launch "Operation Destroy Milo" only "one day before it happened."

According to the message Southern retweeted to her followers – a message riddled with grammatical errors and posted by an "anonymous" Internet user who claims to belong to a secret journalist "mailing list" – "the journalists" have decided to go "scorch earth Milo and destroy him" in order to "weaken the Republicans in 2018." 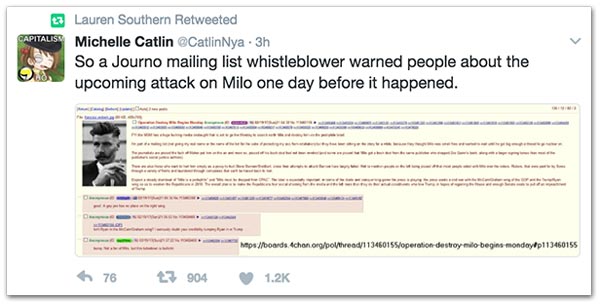 Not everyone at Rebel Media buys that theory, however.

Southern's boss, Rebel Media co-founder Brian Lilley, thinks Yiannopoulos got what was coming to him:

These comments from Milo on pederasty are not taken out of context, he fully explains himself. Is it a surprise he is being dropped? https://t.co/yl9WQvPcU4

Rebel Media's other co-founder, Ezra Levant, has meanwhile chosen to remain silent on the topic.

Levant's silence must speak volumes – during past controversies, Levant has rushed to Yiannopoulous' defence, once declaring "I love Milo Yiannapoulos" and "je suis Milo." 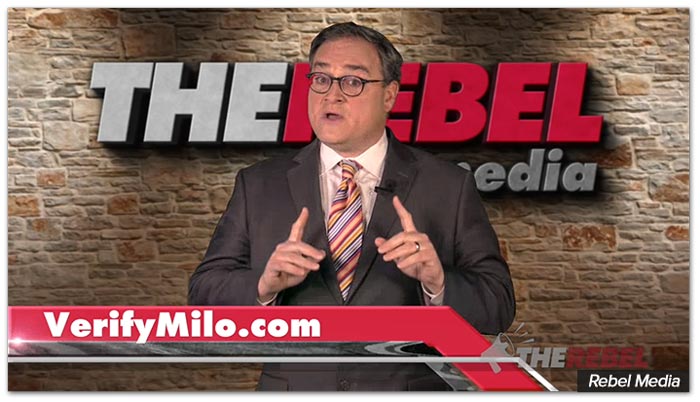 How close were Levant and Yiannopoulous?

Last year, Yiannopoulos was slated to appear on Rebel Media's annual Caribbean cruise, though Yiannopoulis reportedly jumped ship at the last minute and was replaced by the Edmonton Sun's Lorne Gunter.