A full 97% of scientists agree that climate change is real and it's happening.

But one economist -- and senior fellow at the Fraser Institute who has previously stated that climate change science is "held together by duct tape" -- appears to think otherwise.

In a new report released Thursday by the right-wing institute, Ross McKitrick sets out again to debunk the accuracy of climate change models and questions the relationship between carbon dioxide and climate change.

"Climate models overpredicted global warming since 1998," McKitrick writes in the report titled, Climate Policy Implications of the Hiatus in Global Warming. "There has been no statistically significant warming for about 18 years despite a rapid rise in GHG levels."

So why do anything to tackle global warming, he asks. There's "value to waiting" for new information about climate sensitivity expected within a few years "before making any irreversible climate policy commitments, in order to avoid making costly decisions that are revealed a short time later to have been unnecessary," the report concludes.

McKitrick says there is a "widening discrepancy between most climate models projections and observed temperatures." But the Intergovernmental Panel on Climate Change is clear that it's expected there will be a "difference between observations and the simulations," and says the simulations "are not expected to reproduce the timing of natural internal variability."

The IPCC attributes this to "natural internal decadal variability" -- a scientific way of saying there are other variables at play that might cause the projection to fluctuate with the observed data, which doesn't mean the overall trajectory (i.e. climate change) is wrong. 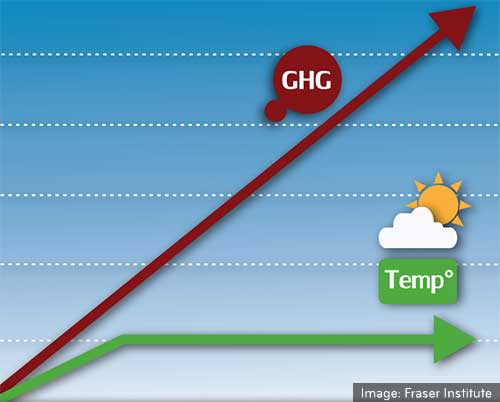 This seems to be a usual knock against McKitrick.

Schmidt said he found a "number of problems" with McKitrick's "basic hypothesis" that human-activity was "contaminating" temperature records, including an attempt to correct the data by incorporating "a rather eclectic mix of climate and econometric variables," such as Gross Domestic Product divided by land mass, literacy and educational levels, number of months with missing temperature records, population and income growth, and coal consumption growth.

What exactly do literacy and post-secondary education have to do with temperature stats?

"It is included not as an indicator of skill of the specific staff responsible for handling meteorological data, but as a measure of the difficulty of recruiting and retaining trained technical staff in general in that country," McKitrick explained in 2007.

Schmidt points out that this method revealed that the uninhabited polar islands of Svalbard and South Orkney were the most "contaminated" by human activity.

But for all his critics, McKitrick does have some high-profile followers.

Back in June, Conservative MP James Lunney made headlines after he tweeted a link to one of McKitrick's articles in the Financial Post, suggesting that the the science of climate change wasn't settled.

This is the same MP who questioned the science of evolution, telling the House of Commons in 2009 that "any scientist who declares that the theory of evolution is a fact has already abandoned the foundations of science." Lunney added that he believed Darwin would be willing to "re-examine his assumptions" if he were alive today.

Speaking of questioning science, McKitrick was listed as a signatory of the 2009 Evangelical Declaration on Global Warming:

1. We deny that Earth and its ecosystems are the fragile and unstable products of chance, and particularly that Earth’s climate system is vulnerable to dangerous alteration because of minuscule changes in atmospheric chemistry. Recent warming was neither abnormally large nor abnormally rapid. There is no convincing scientific evidence that human contribution to greenhouse gases is causing dangerous global warming.

2. We deny that alternative, renewable fuels can, with present or near-term technology, replace fossil and nuclear fuels, either wholly or in significant part, to provide the abundant, affordable energy necessary to sustain prosperous economies or overcome poverty.

3. We deny that carbon dioxide—essential to all plant growth—is a pollutant. Reducing greenhouse gases cannot achieve significant reductions in future global temperatures, and the costs of the policies would far exceed the benefits.

4. We deny that such policies, which amount to a regressive tax, comply with the Biblical requirement of protecting the poor from harm and oppression.

Here's his name under "Prominent Signers" of the declaration, found in June of this year: 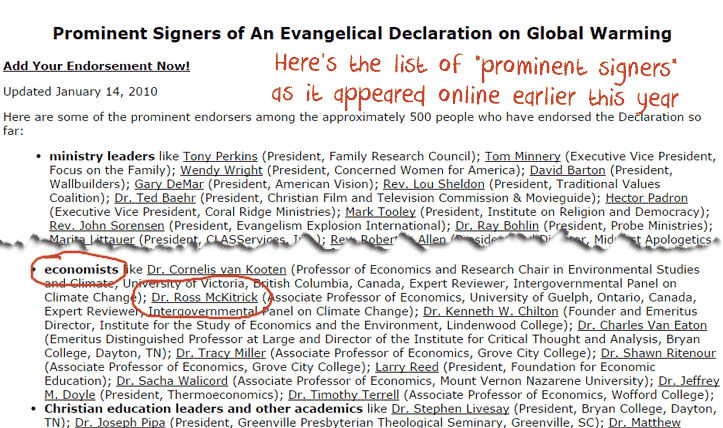 Today, his name is no longer listed: 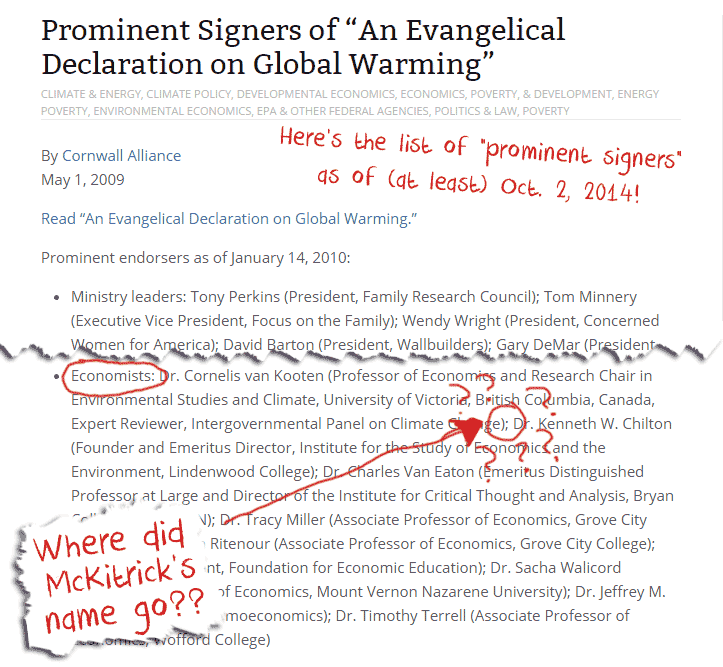