Conservative MP Stephen Harper delivered a one-night performance for an audience of wealthy Republican donors this weekend in Las Vegas, according to an American media report.

Harper, who hasn't been seen around the House of Commons very often since stepping down as Prime Minister despite remaining as an MP, was spotted at the "palatial mansion" of casino mogul Sheldon Adelson, owner of the Venetian luxury hotel and casino, not to mention the 22nd richest man in the United States.

Adelson was hosting a "leadership meeting" of wealthy Republican donors in Las Vegas this weekend to discuss their options after the GOP's "ugly" and "damaging" primaries, thanks to Donald Trump.

Harper spoke to a group of top GOP donors about how to help "fractured parties" unite, although the Washington-based news outlet Politico reports Harper's talk didn't seem to elicit much of a response fhrom the billionaire:

"On Thursday evening, Adelson hosted some of the organization’s top officials at his palatial mansion. While former Canadian Prime Minister Stephen Harper discussed how fractured parties can unite, Adelson listened but said little, according to three people who were present. And on Friday, rather than preside over the deliberations, Adelson and his wife, Miriam, departed for a wedding."

The event's website billed gathering as a "terrific weekend of politics, policy and poker at the fabulous Venetian resort and hotel" where "attendees will have the opportunity to shake hands, ask questions, and be heard by some of the country's leading politicians, policy makers and influential leaders."

Although the website didn't publicly announce Harper's attendance at the meeting, the confirmed speakers list reads like a who's who of the Republican Tea Party movement.

Here are a few examples of some of the colourful personalities who appeared at the same event:

• Republican presidential candidate Ted Cruz, who has called for the outright abolition of the IRS and remarked that a landmark US Supreme Court decision legalizing same sex marriage was a sign "our country is in a time of crisis."

• Wisconsin Governor Scott Walker, who pushed through unconstitutional anti-union laws and floated the idea of building a wall along the Canada-US border.

• Florida Governor Rick Scott, who has not only had issues with voter suppression, islamophobia, trying to ban the word "climate change" and endorsing Donald Trump for President, he also notably released an attack ad against one of his own constituents.

• Pastor John Hagee, who claimed Hurricane Katrina was an act of God to punish New Orleans for holding a "homosexual rally," which is Hagee's term for a gay pride parade. 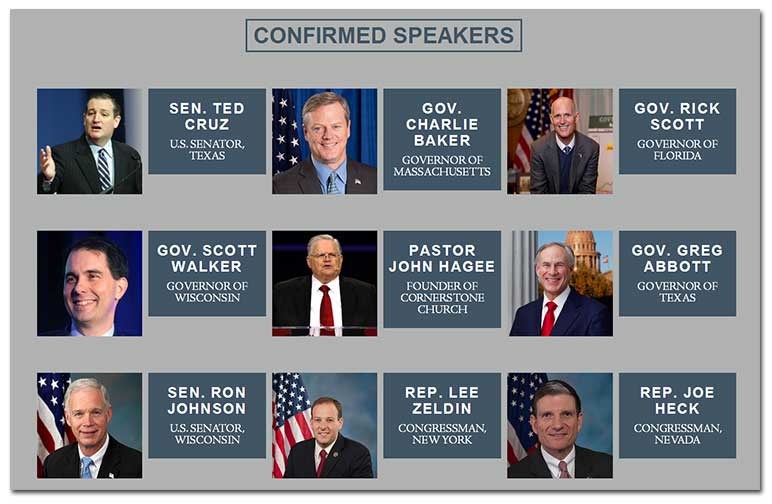 The event's website says tickets to the exclusive event ran for $1,000.

However, a "VIP dinner hosted by the Adelsons on Thursday, April 7" is listed as one of a handful of "upgrade opportunities" for those willing to spend an unspecified additional amount for extra perks.