Someone at the Fraser Institute accidentally blurted out a good idea

You might want to sit down for this: the Fraser Institute has a really good idea.

Could Alberta be wealthier if it adopted Norway's trillion dollar model for managing resource revenues?

One author of a new Fraser Institute report comparing Alberta's finances with other oil-rich jurisdictions seems to think so.

"Norway started its sovereign wealth fund in 1990, and Alberta today has, what, $16-17 billion squirreled away in its Heritage Fund? Norway has $600 billion," Fraser Institute fellow Livio Di Matteo told Calgary's 660 News on Thursday. Di Matteo was making the rounds as the co-author of the Institute's latest report that he co-authored. (Norway's fund is up to $878 billion at last count, but we'll let that one slide.)

But scan the Fraser Institute's report for the word "Norway" and you'll find nary a peep.

The report ultimately concludes that the only conceivable way Alberta can move forward is by slashing tens of billions of dollars in spending – and cut taxes for corporations, of course.

But these conclusions don't square up with what Di Matteo told 660 News: that following the Norwegian model actually brings in more revenue, and would put Alberta into surplus. It's not clear how spending cuts and tax reductions will achieve that.

Just last year, a different Fraser Institute report found that if Alberta's Heritage Fund had used the model offered by Norway's Sovereign Fund since 1982, the results would be an astounding 1,766% growth rate by 2011. Under those circumstances, today the fund would likely stand somewhere close to $200 billion: 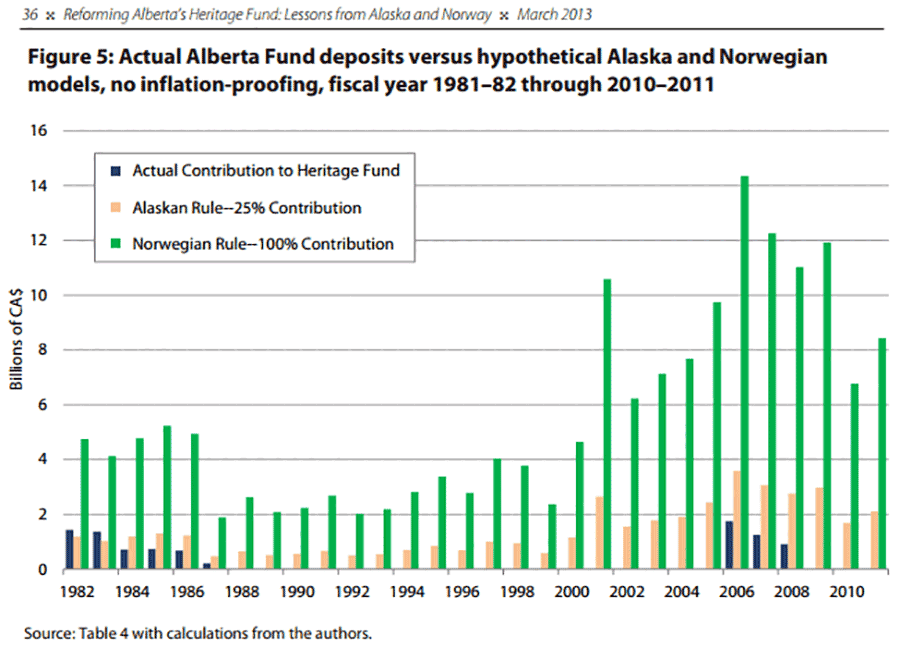 It's not clear why the Fraser Institute didn't remember this one.

Jason Clemens (another co-author of yesterday's report and the Fraser Institute's Executive Vice President) was one of the authors who wrote the 2013 report that conceded Norway's sovereign fund would yield way bigger benefits for Alberta.

There's just one little thing: he did worry that there could be "downsides" and "a danger" associated with the Norwegian model — namely, that this could lead to "environmental or social benefits that are not strictly financial":