Sir John A MacDonald once said the Senate "must be an independent House, having a free action of its own..."

Likewise, Stephen Harper also said he thinks "the Senate is an independent body," and as recently as during last week's leaders debate, claimed he never tells senators what to do.

Yet new e-mails from inside Harper's office tabled as evidence Thursday in the ongoing trial of Mike Duffy suggest what Harper says in public about the independence of the Senate may not always be in line with what goes on behind the scenes.

Not only do the e-mails show key figures in the Prime Minister's Office worked in secret with Conservative Senators to "protect Senator Duffy," they also show Harper exploring options to effectively intervene in Senate business.

The e-mails show Harper reviewed a memo prepared by PMO aides outlining two possible plans of action on how to resolve the "Senate residency issue" – though it is never explained why the PMO thought this was their problem to solve in the first place.

Harper's aides explain to Harper in the memo that "it is fundamental to us that all three Senators be deemed residents of the provinces they were appointed," presumably referring to Senators Duffy, Wallin and Brazeau.

One option from the PMO amounted to rigging a Senate committee to produce conclusions decided by the PMO in advance while the other, Harper was warned, could be seen as "vandalizing" the very "process and traditions of the Senate."

Under option one, a Senate committee would hold "public meetings" that would even include "constitutional experts" and "generate news on the issues."

But, after several weeks of going through the motions of public consultation and democratic debate, the committee would eventually reach a predetermined conclusion and "deem all Senators residents of their province of appointment": 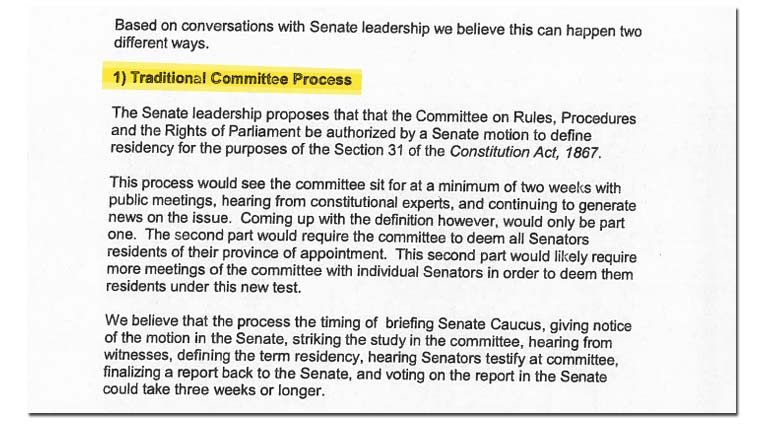 Harper was advised that introducing a motion re-defining Senate residency then quickly shutting down debate would be a more efficient way of getting the outcome he desired, although he was also told this may "be seen by some as the vandalizing of the process and traditions of the Senate."

"We believe that this motion could be debated and [closure] used as necessary to generate a vote within the Senate chamber," the memo tells Harper.

And as an added bonus, it could all be done "without a word of the debate ever being televised."

The end result, the memo explains, is whenever "the constitutional residency of a Senator is questioned," it could then be referred to committee "using the motion and the debate described above as helpful definitions." 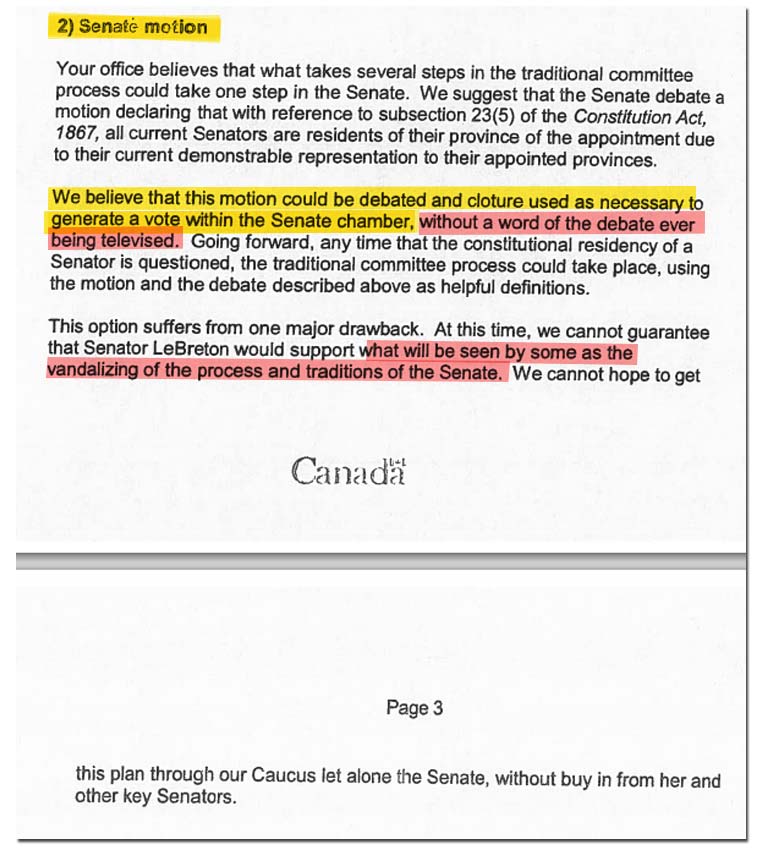 So what did Harper make of the proposals?

Harper seems to prefer "option 1" ("very strongly," too), but sensing he was wandering into a minefield, Harper notes "had I known we were going down this road I would have shut it down long before this memo," according to an e-mail the next day.

On the other hand, this only begs the question: why did Harper begin down the road in the first place?

Harper noted that "as long as they maintain a residency in the province, as per tradition, we will deem that as sufficient" for meeting the Constitutional requirements for sitting in the Senate.

E-mails go on to show Harper's legal counsel Benjamin Perrin arguing that Harper's claim that simply owning property in a province is not in line with the Constitutional requirements to sit in the Senate. To which Harper's then-Chief of Staff Nigel Wright abruptly announces "we will not take any steps in the Senate to address residency."

In an e-mail statement on Thursday, Conservative spokesman Stephen Lecce told the Ottawa Citizen that Harper “has been consistent that the appointed senators met the Constitutional residency requirement.”