On Tuesday, Young faced an intense backlash after a story broken by PressProgress drew attention to a speech she delivered to a church in her Vancouver riding at the end of June. Young compared the Conservative Party of Canada to Jesus Christ, said Bill C-51 was "in the same vein" as his teachings and alleged CSIS was aware there was a bomb on board Air India Flight 182 but chose not to act.

Young later admitted her facts were wrong on the 1985 Air India bombing. And her comments comparing the Conservatives to Jesus were widely ridiculed with #CPCJesus becoming the top trending hashtag in Canada on Tuesday.

Could anything get worse for Young?

In an e-mail blast sent out Wednesday morning -- several hours after the advent of #CPCJesus -- Day warned Young's supporters of a "radical left-wing group," pointing to a recent Vancouver Sun article, saying "it references a poll bought and paid for by an extreme activist group attempting to influence the results of the election." 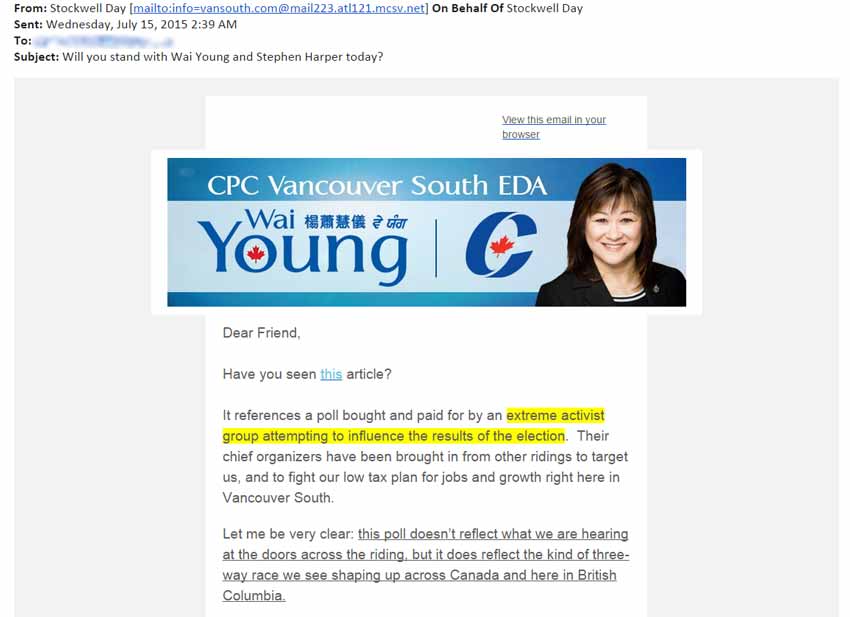 On Wednesday, Dogwood Initiative – the organization Day labels as "extreme" – fired back:

"Stockwell Day believes humans walked the earth with dinosaurs and Wai Young doesn't read newspapers, so I can see why they'd be perplexed by the results of a scientific poll," Dogwood Initiative's Energy and Democracy Director Kai Nagata told PressProgress.

During the 2000 election, Day's creationism was a subject of much controversy. Last month, Young stated that she no longer reads newspapers "because most of the facts in there are not factual."

"If Wai Young is unhappy with the results I would suggest she spend more time representing the values of her constituents, rather than attacking the polling firm or Dogwood supporters."

Nagata explained to PressProgress that Dogwood aims to raise the profile on environmental issues and "boost voter turnout." Their poll was conducted by Insights West, a polling firm whose past clients include other "radical" groups like the B.C. Lions, Best Buy, Nintendo, and Trinity Western University, to name a few.

But Day has his facts straight on one thing: the poll really doesn't "reflect" what they've been hearing at the doors across Young's riding.

For a better picture of what she has heard at the door, here's Young in her own words, telling the congregation at Harvest City Church that her constituents want her to stop sending them flyers "so focused on just talking about crime":

According to Mothers Against Drunk Driving, a first-time conviction for impaired driving can result in a one- to three-year driving prohibition and the possibility of 18 months in jail. A third conviction can result in license suspensions ranging from five years to life and up to five years in jail, depending on the province.