With an increase of just 2,000 part-time jobs for a net loss of 28,900 jobs, Erin Weir, an economist with United Steelworkers, puts the bad news in context.

"This large decline in employment coincided with an increase of 41,000 in Canada's working-age population. The employment rate, the proportion of working-age Canadians who are employed or self-employed, fell to 61.5% – its lowest level since March 2010," Weir said in a statement.

In other words, if the employment rate was back at its pre-recession peak (63.8%), Canada would have 665,000 more jobs today. "Damage of recession has not been repaired," tweeted Jim Stanford, an economist with Unifor.

Instead, Canada's employment rate of 61.5% is now only 0.2 points above July 2009, the trough of the recession. "Employment rate has been steadily eroding since late 2012. Cda's recovery has no engine, no momentum – thanks, austerity," added Stanford.

Meanwhile, Douglas Porter, chief economist with the Bank of Montreal, told the Canadian Press that "there's no question this was a bit of a disappointment. It continues a trend we've seen over the last six months of down then up, and up then down. So we're seeing a see-saw action in Canadian employment." 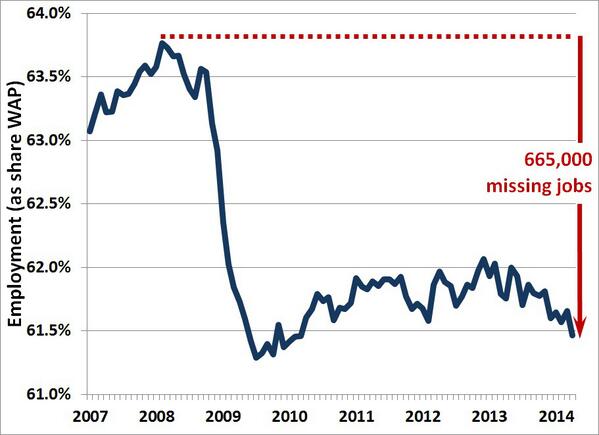