Although her talk of xenophobic purity tests for "Canadian values" dominated headlines for months with speculation Canada was witnessing the rise of the Canadian Donald Trump, Conservative MP Kellie Leitch leadership campaign turned out to be a big dud.

In the end, Leitch finished a distant seventh on the first ballot.

All in all, fewer than 10,000 people actually picked Leitch as their top choice in a leadership vote where 141,000 ballots were cast – in more than half of Canada's 338 ridings, Leitch couldn't find 25 people willing to support her.

It might surprise some Canadians to learn how shallow her support was. Even though she polled poorly throughout the leadership race, Leitch received nearly three times as much media coverage as the eventual winner.

According to an analysis by PressProgress, Leitch was mentioned nearly 11,500 times by Canadian media outlets since launching her leadership bid in May 2016. New Conservative leader Andrew Scheer was only mentioned around 4,000 times since he launched last September. 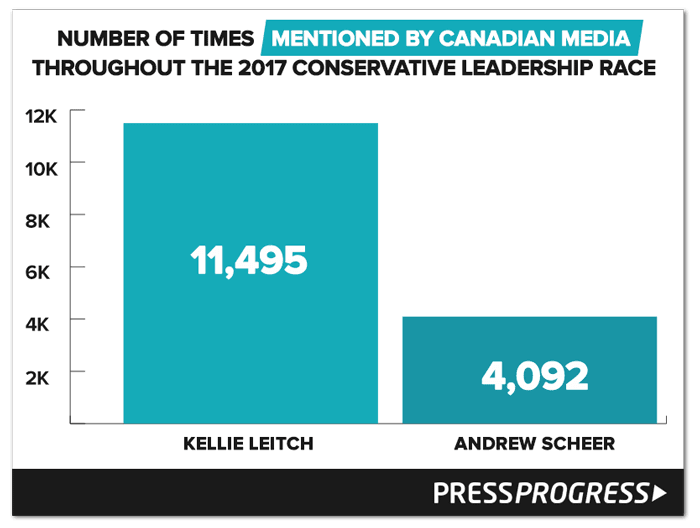 And just take a look at the headlines.

The media buzz around Leitch's campaign created the impression that Leitch's brand of xenophobia was on the march, generating headlines like "Kellie Leitch's Trumpian immigration plan could work for her" and "Beware: Kellie Leitch is on a winning roll."

Maclean's Magazine even ran a provocative cover story featuring Leitch wrapped in the flag, declaring Leitch had "touched off a culture war" and "revealed that Canadians aren't as tolerant as they think." 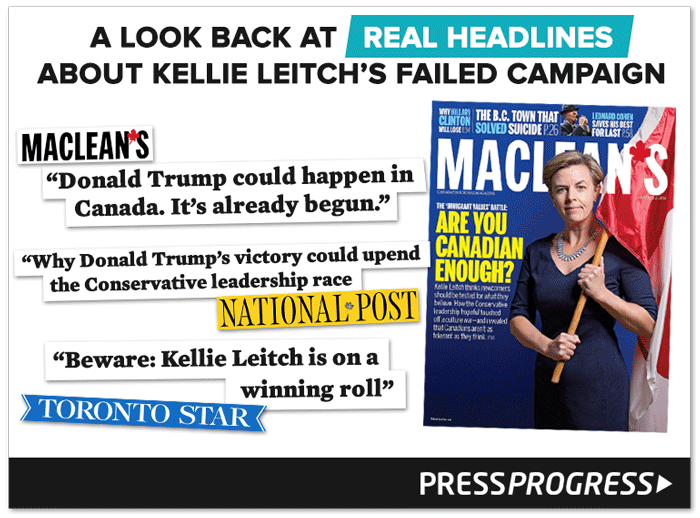 And a closer look at what the media was saying below the headlines might raise questions about whether Canada's big media outlets know how to handle politicians who seek to target minorities for political gain?

Despite the fact Leitch's proposal was widely viewed as a dog whistle aimed at racist, anti-immigrant elements in the Conservative base, fewer than one-third of these stories contained words like "racism," "bigotry," "xenophobia" and "hate."

Instead, the data suggests Canadian media outlets were broadly more comfortable talking about a proposal targeting minority groups in the context of whether or not it was a good strategy for winning elections – for example, 63% of the time they mentioned words related to voting and electoral outcomes, 38% of these mentions referenced public opinion polls, another 38% mentioned words like "winning" and "victory" and 16% used words like "strategy" or "strategist." 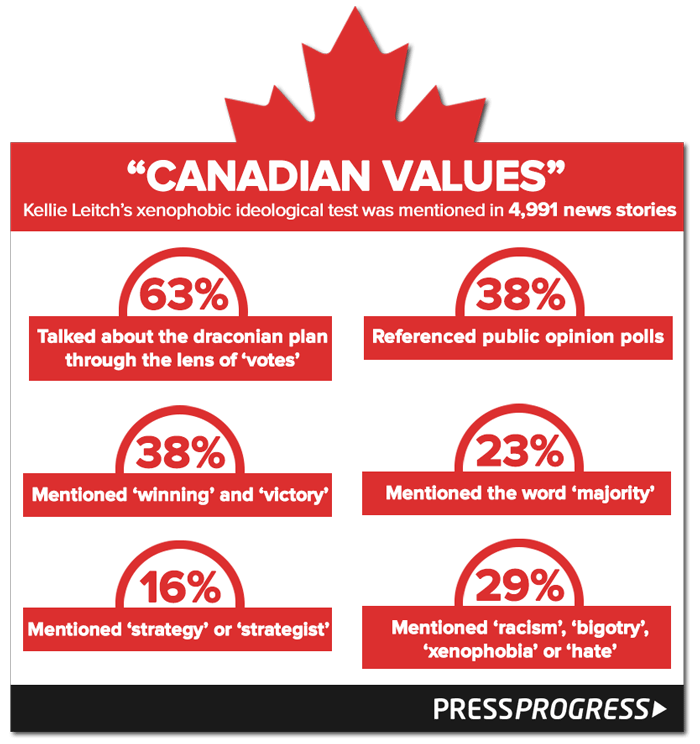 Polls, in particular, appeared to fill an certain void. While old school journalism prides itself in neutrality, polls were sometimes used by journalists as a stand-in for their own moral compass, effectively turning questions of minority rights into issues decided by a popularity contest – take this example from the National Post that contrasts public polling with Leitch's "polarizing talk" and "hard-line views":

"Leitch's idea to test immigrants for 'Canadian values' may be polarizing, but it has found a foothold in Canadian society, with polls indicating support for the policy."

In fact, the same poll even found a majority of Canadians are strongly opposed to Trump-style politics too.

Likewise, the Globe and Mail described the xenophobic plan as the brainchild of Leitch's "shrewd strategist." And one columnist in the Toronto Star argued "Leitch has guts and isn't afraid to play dirty," suggesting her "xenophobia" is all part of a winning "strategy":

"It's popular among many Canadians to dismiss Kellie Leitch’s plan to screen potential immigrants for 'anti-Canadian values' as a bad move on her part ... in fact, she's latched on to a strategy that could propel her to victory in the federal Conservative leadership race."

Kellie Leitch is out. I have been holding on to these to set off like fireworks: pic.twitter.com/jbQTswqVkh

Looks like quite a few people got Leitch all wrong.