Editor's note: Several updates on this story have been added to the bottom of this post.

If the social media postings of Marilyn Gladu are anything to go by, the Conservatives' pick for Sarnia-Lambton doesn't seem thrilled about Canada keeping church and state separate.

She also seems to think Muslim immigrants "want to kill everybody."

In 2013, while serving as President of the Sarnia-Lambton Conservative riding association, Gladu posted on Facebook that Canada should be returned to its "strong foundation," adding that "even up to 30 years ago, Christianity was written into constitutional proceedings."

Canada celebrated the 30th anniversary of the Charter of Rights and Freedoms a year earlier. 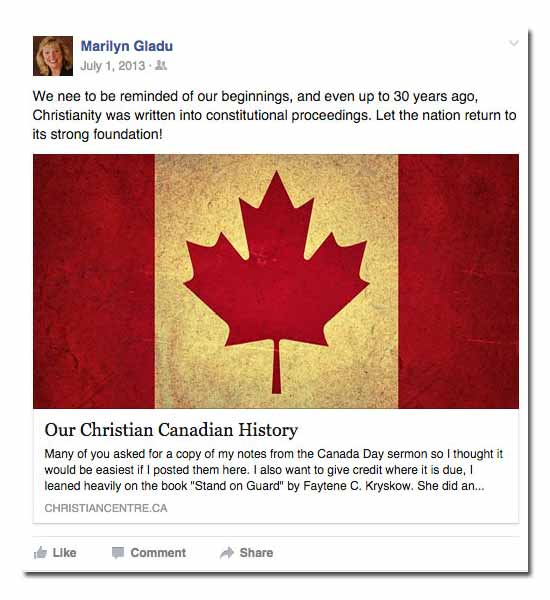 While the sermon linked to by Gladu's post has since gone offline, the sermon was influenced by the book Stand on Guard: a Prophetic Call and Research on the Righteous Foundations of Canada by Faytene Kryskow. Here's how Amazon describes the book:

"This book is a trumpet call... to reformation of the unrighteous ideals and systems that have taken root in Canada. Stand on Guard reminds us of our righteous inheritance, so that, we can stand with added confidence in our generation and see the dominion of Jesus Christ manifested in every arena of the nation."

In 2014, Gladu shared a music video criticizing the separation of church and state.

Citing a line referencing "God" in the national anthem, Gladu wrote that it's "still written into the spiritual foundation of our country." 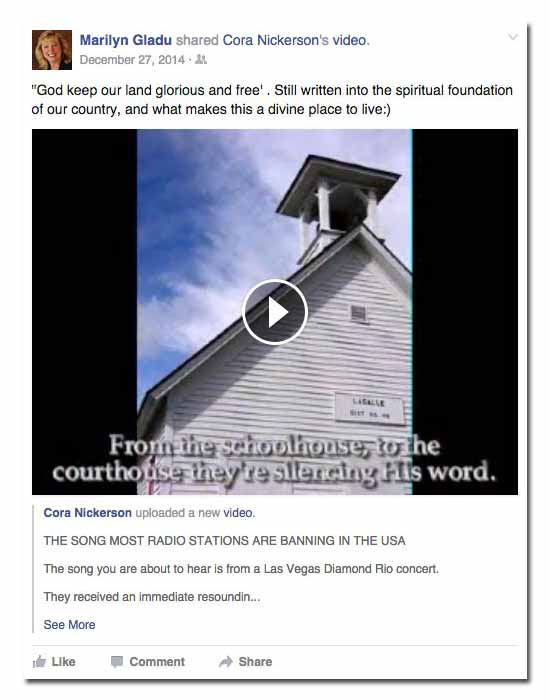 "There's no separation, we're one nation under Him... Now there are those among us who want to push Him out, and erase His name from everything this country's all about, from the schoolhouse to the courthouse they're silencing His word, now it's time for all believers to make our voices heard."

But apparently Gladu's feelings on religious freedom do not extend to other religions in quite the same way.

In 2014, for example, Gladu criticized "people" who "came to a country with certain values, and now want to kill everyone else." 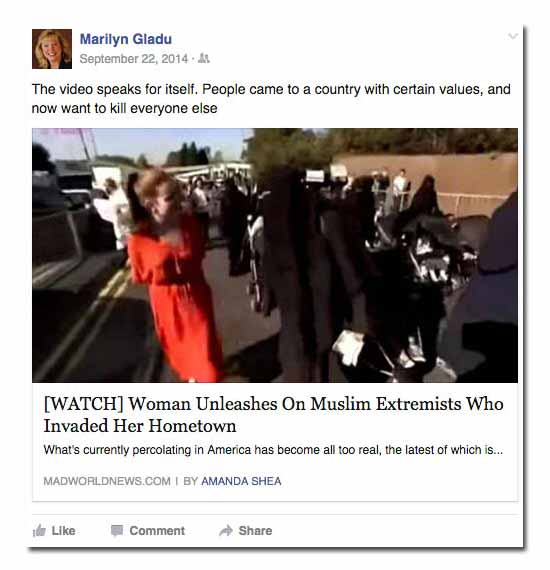 That Facebook post links to an article rambling about "the ever-present Muslim invasion" by "Mad World News" (whose mission is to "restore our constitutional republic to what the founding fathers envisioned").

And a month later, Gladu tweeted this to Jason Kenney: 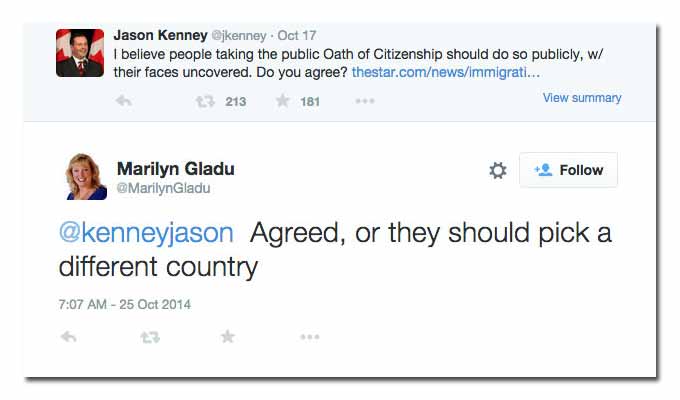 However, Muslims are not the only topic that keep Gladu busy on Facebook.

In 2014, Gladu accused "the national media" of suppressing "the truth" about Michael Brown, whose death sparked the Ferguson protests and was a key moment in the #BlackLivesMatter movement.

Gladu shared an image of a man pointing a gun at a camera falsely identified as Michael Brown and wrote: "as they lay this angel to rest remember not everything you're being told passes the truth test." 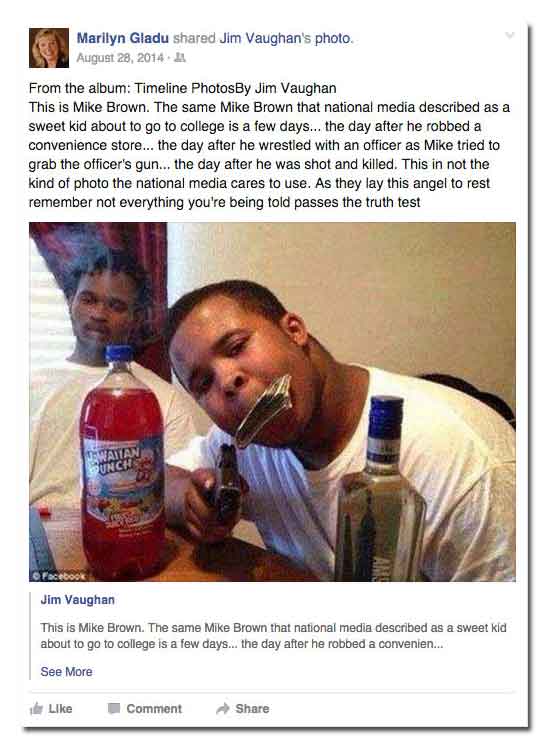 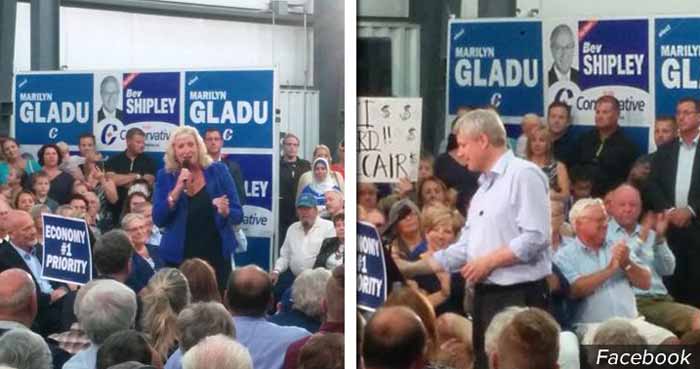 UPDATE 1: Shortly after publication of this story, Gladu changed the Twitter account associated with her campaign to "protected," preventing voters from viewing her tweets.

The Observer says Gladu "couldn't confirm if the social media posts shown on the Press Progress website are hers" because her campaign manager told her "it's ugly, you don't want to read it."

Asked specifically about her postings on Christianity and the Canadian constitution, Gladu said "absolutely, I believe in the separation of church and state," adding "that's ridiculous" and "one of the stupid things that was in there."

Gladu says she believes in freedom of religion but is waiting for the "final outcome" of the Conservative government's legal challenge of wearing veils at citizenship ceremonies, which she points out is before the courts.

UPDATE 4: Less than 24 hours after this controversy flared up, Conservative cabinet minister Kellie Leitch appeared in Sarnia and gave Gladu her endorsement:

Great turnout for @MarilynGladu in Sarnia-Lambton tonight! Can't wait to see this awesome lady in Ottawa as a new MP! pic.twitter.com/9gY91l4dhs

VIDEO: Jason Kenney suggests constitutional rights are passed down to Canadians from God