"Staggering": Toronto's super-rich are 103,140 times wealthier than the average person in Toronto

The biggest city in Canada has a big gap between the super-rich and everybody else.

According to a new study from the University of Toronto's Martin Prosperity Institute, Toronto's super-rich are among the wealthiest in the world.

Examining data on the wealth of billionaires from around the world, the study finds Toronto's super-rich are over one hundred thousand times wealthier than the average person in Toronto.

Although cities "in the relatively less developed nations of the Global South" rank highest on the study's "Super-Rich Wealth Gap," Toronto's super-rich were 103,140 times wealthier than the average, placing Canada's biggest city in the top 20 internationally. 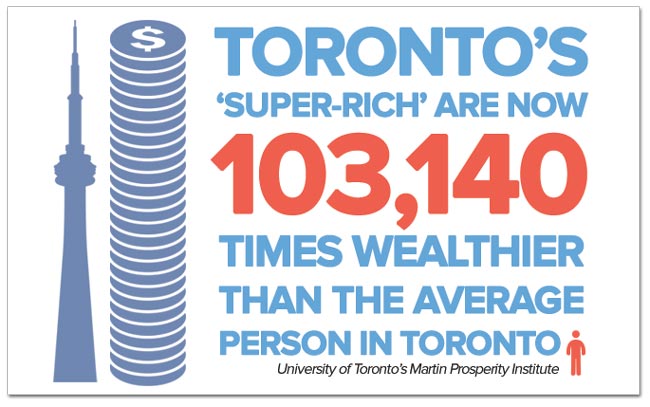 "The gap between the super-rich and the rest of society is staggering," the study notes, pointing out that "the geographic distribution of billionaires is spiky" and "follows from the size and economic and financial power of global cities."

The study points out that the wealth of the super-rich is heavily concentrated in cities, with "the top 20 accounting for nearly half" of the world's billionaire wealth.

As a major hub for the country's largest financial and corporate institutions, Toronto unsurprisingly has a high concentration of billionaires.

Compounding the problem is many of those billionaires continue to benefit from tax policies skewed towards the rich, including the stock option loophole – a campaign promise Finance Minister Bill Morneau broke earlier this year to keep in place.

The study's authors also suggest Canada's "lax" policies on taxing inheritances are allowing billionaires to "essentially hand their wealth down from generation to generation," causing a greater and greater concentration of wealth in the hands of a few "super-rich" people at the top.