They say a picture's worth a thousand words.

But in the case of BC Liberal leader Christy Clark, a picture might be worth thousands of dollars.

A new analysis by PressProgress of promotional photographs released by the Office of the Premier of BC shows that BC Liberal donors were showcased in at least two-thirds of Clark's official photo ops held over the last six months.

According to The Province, Clark's government has spent about $1 million on promotional photos since taking office, an average of $3,500 per week.

In advance of BC's spring election, the Government of BC's official Flickr account shows the Premier's Office staged 36 events using public resources between December 2016 and April 2017 – at least two-thirds of those photo ops feature examples of Clark posing with BC Liberal donors, using the businesses of BC Liberal donors as backdrops or otherwise promoting events where BC Liberal donors had a clear interest or connections. 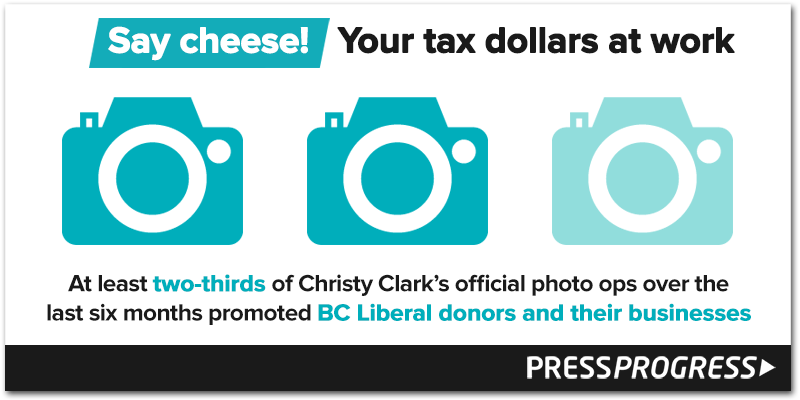 The influence of corporate money on Clark's BC Liberal government has been one of the central issues of the 2017 BC election – recent reports have shown the BC government has been lobbied over ten thousand times by BC Liberal donors and 177 donors who gave the BC Liberals $55 million received over $15 billion in government contracts, subsidies and other payouts over the last decade.

Two months ago, the Globe and Mail's editorial board concluded Clark's "BC Liberals ... have become addicted to the money that is sluiced into their coffers every year by supplicant corporations, lobbyists and business owners."

Together, BC Liberal donors showcased in the Premier's Office official taxpayer-funded promotional photos over the last six months have given Clark's BC Liberals well over $3 million dollars, with some continuing to donate tens of thousands of dollars in the last few weeks alone.

Here are a few examples: 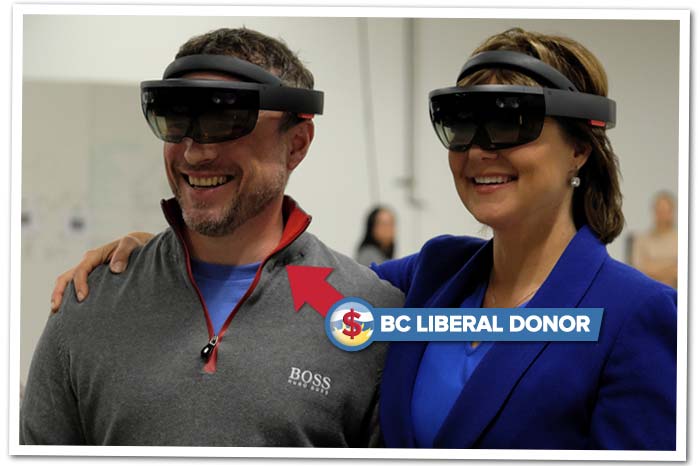 On February 3rd, 2017 Clark staged a photo op promoting her innovation agenda at Finger Food Studios, a start-up in Port Coquitlam that the Premier trumpeted as an example of BC's "thriving" tech industry (although tech leaders suggest that's not entirely accurate).

One thing Clark forgot to mention is that Finger Food CEO Ryan Peterson – who appears in a taxpayer-funded photo with the Premier's arm slung around his shoulder with virtual reality helmets strapped to their heads – is also a BC Liberal donor.

Elections BC records show Peterson's personal donations and donations on behalf of his company amount to nearly $10,000 combined. 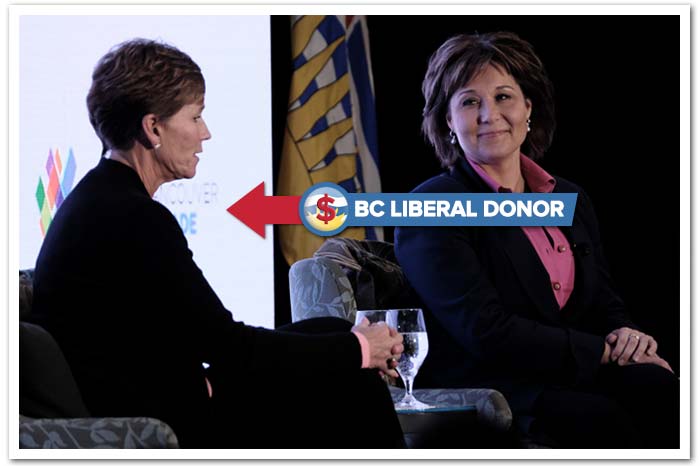 On February 22, Clark held a Q&A session promoting BC's 2017 Budget, as well as her own "prudent fiscal management," before an audience of business leaders at the Vancouver Board of Trade.

While the Premier's event was sponsored by BC Liberal corporate donors like Fasken Martineau ($382,785) and Deloitte ($52,925), Clark also joked she'd be asked some "tough questions" by Q&A moderator Sue Paish.

Well, the person lobbing those "tough questions" to Clark just so happened to be a BC Liberal donor and the CEO of biomedical giant LifeLabs, contributor of an additional $154,355 to Clark's party – they also sponsored the BC Liberal convention in November 2016. 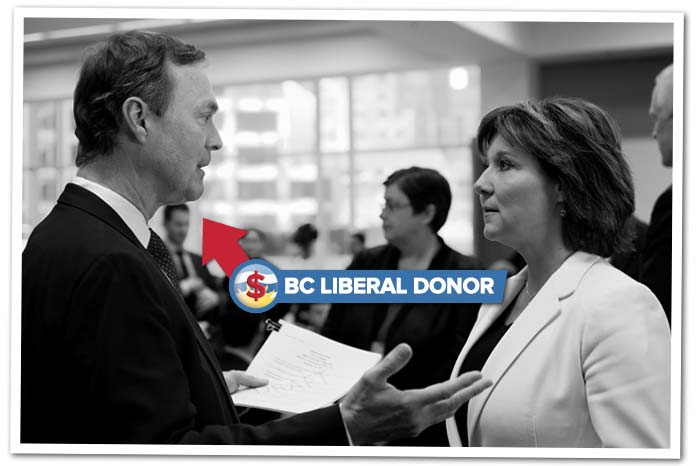 Back on January 23, Clark was joined by the head BC's Association for Mineral Exploration (donated $14,480 to the BC Liberals) to announce new "tax incentives" plus $10 million in subsidies for the mining industry.

Another old pal who spoke at the event (and was lucky enough to snag a taxpayer-funded photo with the Premier) was Teck Resources CEO Don Lindsay, whose company and subsidiaries have given the BC Liberals over $2.8 million while simultaneously lobbying the BC government and cabinet ministers over 500 times.

Teck Resources is also the BC Liberals' largest donor. 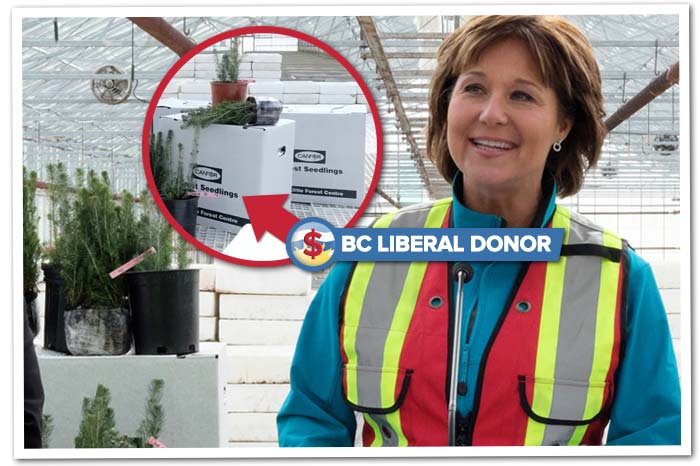 Clark took a field trip to a Prince George tree seedling nursery to announce $150 million in subsidies for tree planting on February 17.

What was the backdrop for the event? The JD Little Forest Centre, owned and operated by CANFOR, a corporation that has donated a staggering $746,091 to the BC Liberals over the years.

How about one more? 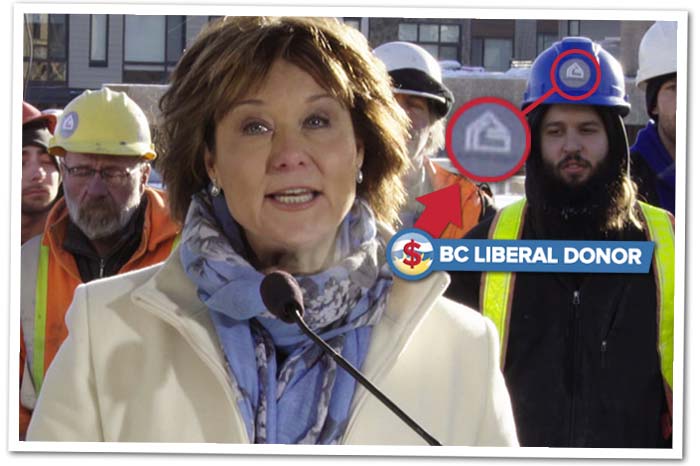 In December, Clark unveiled a policy "widely panned by experts" aimed at incentivizing first-time home buyers at a townhouse development in Surrey.

You might be surprised to learn that the developers building the townhouses Clark used as her backdrop (the Platinum Group of Companies) just so happen to have given the BC Liberals over $20,000 in combined individual and corporate donations.

Get the picture yet? Here are a few more just to round things out: 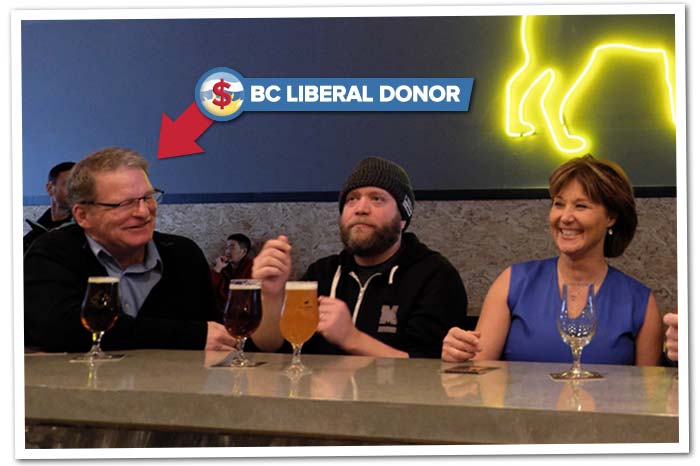 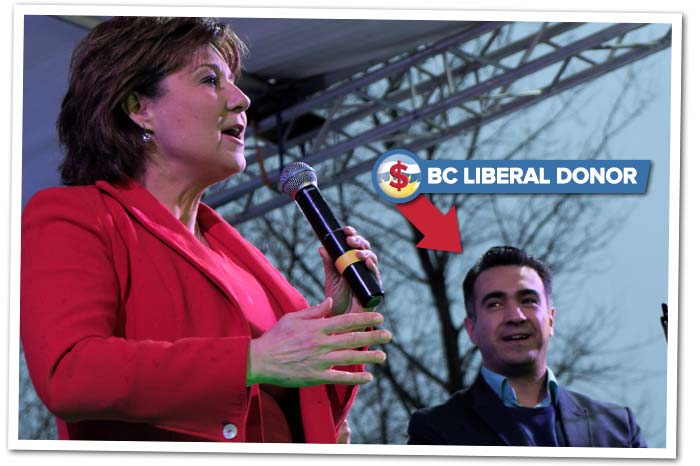 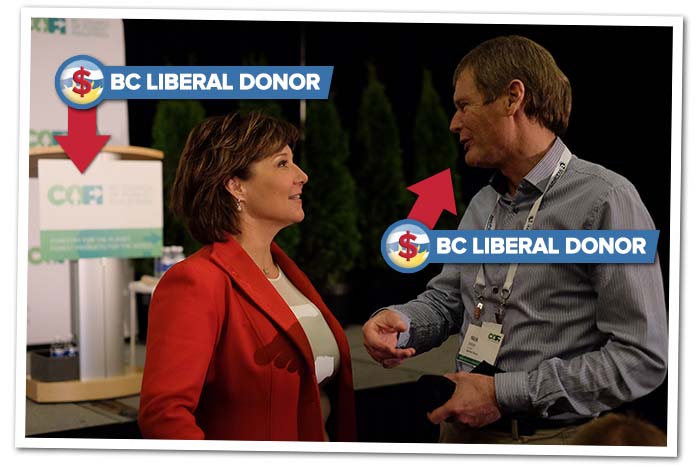 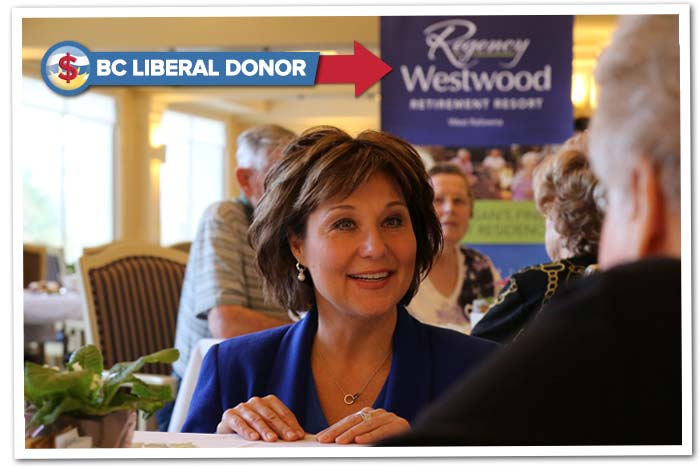 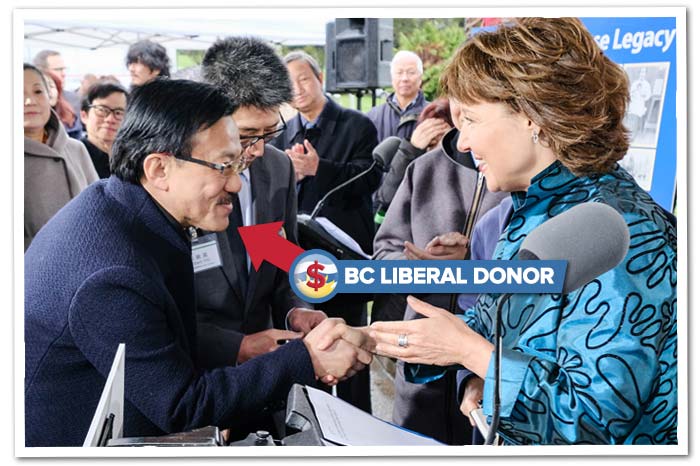 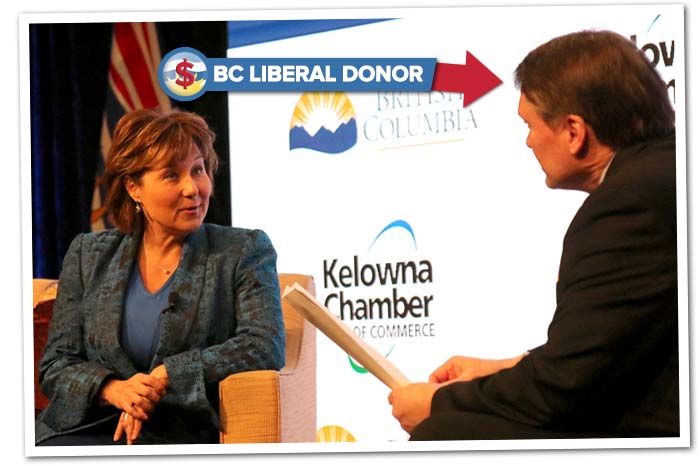 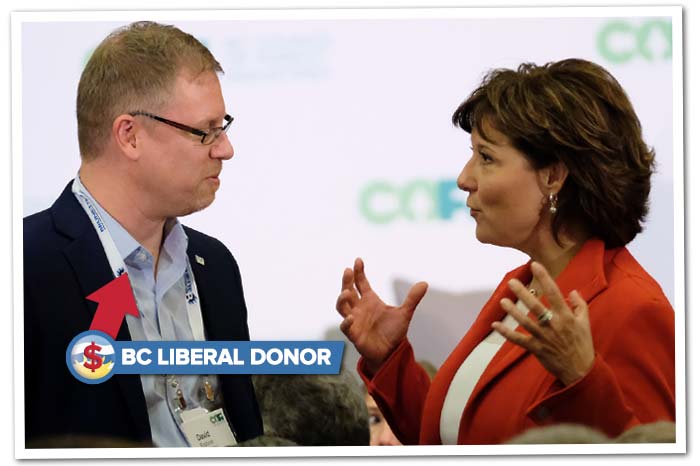 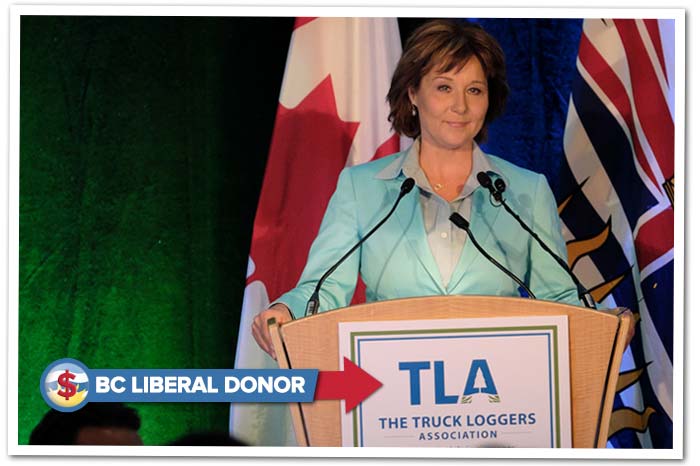 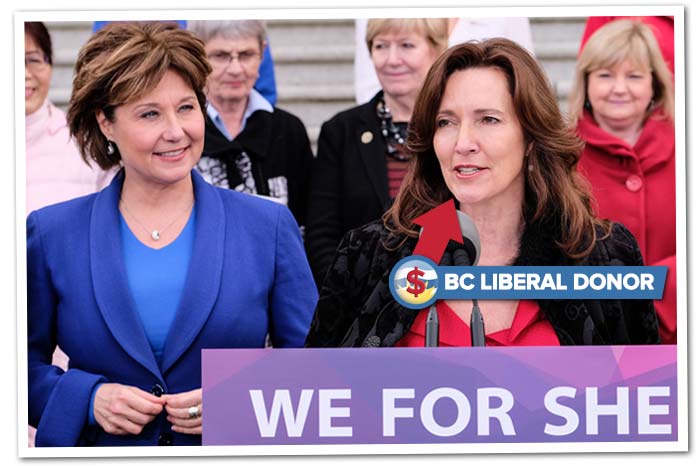