The anti-tax Fraser Institute has clarified that they are, in fact, 100% pro-the-idea-of-taxes after all!

The stunning admission appeared in a Vancouver Sun this week in response to a column criticizing the "anti-tax rhetoric" of right-wing groups like the Fraser Institute and Canadian Taxpayers Federation.

In their opinion piece, Fraser Institute's Mark Milke and Charles Lammam admit "taxes are the price we pay for civilization":

"In a recent column about the Metro Vancouver transit plebiscite, Sun columnist Daphne Bramham complained about business leaders who talked 'way more about cutting taxes for poor beleaguered taxpayers for the past 30 years than they have about the valuable services tax money provides.'

"Bramham blamed so-called 'anti-tax' groups such as the Fraser Institute for helping drive this worrying trend. This is silly and simplistic. Let us explain.

"Taxes are indeed needed to fund important government services, critical both to a well-functioning economy and more generally, civilization."

Wait, hold on a second -- the right-wing Fraser Institute is actually disputing the claim that they use "anti-tax rhetoric"?

The Fraser Institute is "anti-tax"? Where would anyone get such a "silly" idea?

"It’s not surprising Bramham and others feel that the public discourse since the 1990s has focused primarily on tax reductions and ensuring the correct tax mix. The reforms worked.

"Still, the average Canadian family currently pays 42 per cent of its income in taxes. That’s more than they pay for basic necessities like food, clothing and shelter combined."

And here we may have some very good news for the Fraser Institute:

The average Canadian family is not actually paying more in taxes than "food, clothing and shelter combined"!

As it turns out, both the Fraser Institute's claims that "the average family currently pays 42 per cent of its income in taxes" and that they pay more in taxes than they do for "basic necessities like food, clothing and shelter combined" turn out to be incorrect.

To reach their magic number of 42%, the Fraser Institute padded the tax bill of the average family by counting corporate taxes, along with royalties on oil and gas extraction, import duties, and taxes relating to tobacco, liquor and amusement -- all things that may not be reasonable to include in the average Canadian family's tax bill.

"Is it reasonable to include corporate taxes in the total that Canadian families pay?" asked former Walrus editor John MacFarlane in a stinging Editor's Note last year.

But even if we entertain the Institute's theory that literally *all* taxes get passed down to the average household, OECD data indicates Canadian taxes from all sources amounted to 30.6% in 2013 -- about 11% lower than what the Fraser Institute claims. 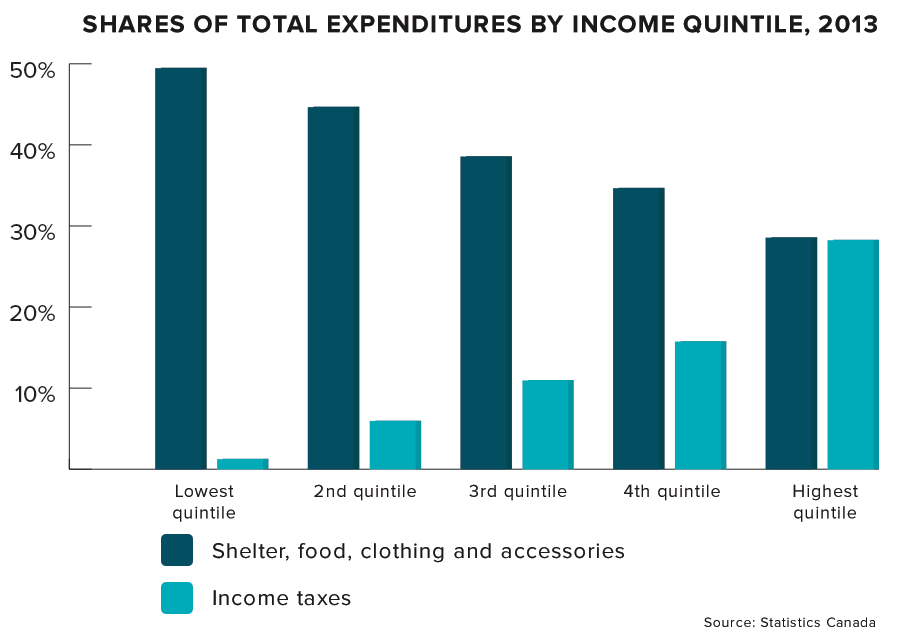