VIDEO: Kellie Leitch won't rule out a ban on Catholics immigrating to Canada

Appearing on CTV's Question Period Sunday, the Conservative leadership candidate continued to slide down a slippery slope of her own making, dodging questions as to whether she thinks the Catholic Church promotes "anti-Canadian values."

According to Leitch's own explanation of her plan: immigrants will be banned from Canada if they hold "anti-Canadian values," something she says includes "intolerance towards other religions, cultures and sexual orientations."

Given the Catholic Church's historic opposition to same-sex marriage – something that has been law in Canada for over a decade – one might wonder if Leitch's immigration ban would apply to Catholics too?

Asked repeatedly by CTV Question Period host Evan Solomon if her plan would effectively block Catholics from immigrating to Canada, Leitch wouldn't rule it out.

"Let's get specific there, let's say someone comes and they want to become a citizen and they're Catholic. And they say 'do you believe in same-sex marriage'? And they say 'no, I don't'. Do they get in? Or do they now have an 'anti-Canadian value'?"

Instead of ruling out the possibility of a Catholic immigration ban, Leitch cryptically suggested "there are certain values" Canadians want to have a "discussion" about:

"I think this is a discussion Canadians want to have. And for myself, there are certain values."

Except that doesn't close the door on the possibility of a Catholic immigration ban – should this be a difficult question for a Conservative leadership candidate to answer?

"I'm trying to get you on something specific ... I'm just wondering if this is a solution without a problem? For example, would a Catholic person who doesn't believe in same-sex marriage, which is law here – would they fail this test? Would an Orthodox Jewish person who believes that a woman needs her head covered by a wig – would they fail this test? That's the reality of what this values test would be. On those particular cases, would they past the test?"

Leitch told Solomon that getting into specifics would only serve to "trivialize the issue":

"I'm not going to go point-by-point, issue-by-issue and trivialize this issue."

Leitch's plan to subject immigrants to ideological purity tests has been a lightning rod for controversy – it's attracted condemnation from fellow Conservatives as well as interim leader Rona Ambrose too.

And where exactly is Leitch's slide down this slope leading her?

According to another Sunday morning political show, there is no evidence Leitch's descent into nativism is paying off.

Global TV's The West Block reports that not only is Leitch polling at the bottom of the Conservative leadership pack, but she also boasts the lowest "positive" rating in the entire Conservative field: 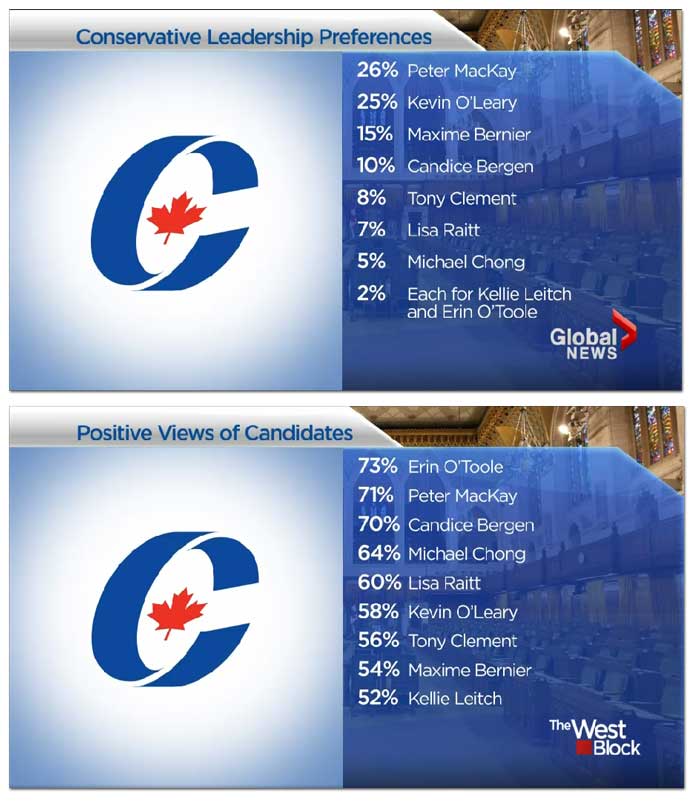