VIDEO: Why are senators allowed to raise money for the Conservatives?

Should Canadian senators be involved in partisan political fundraising?

Can the chamber of sober second thought really be sober or offer second thought if senators are shilling for Stephen Harper at cocktail parties and tangling themselves up in conflicts of interest? Should senators be "banned from fundraising for political parties," as the late Jack Layton argued in 2011?

Irving Gerstein: The former president of Peoples Jewellers and the head fundraiser of the Progressive Conservatives, Gerstein now serves as the chair of the Conservative Fund of Canada (even though he's a senator). Back in 2011, Gerstein was charged for breaking election law for his role in the 2006 in and out scandal, although his charges were later dropped as part of a plea bargain. 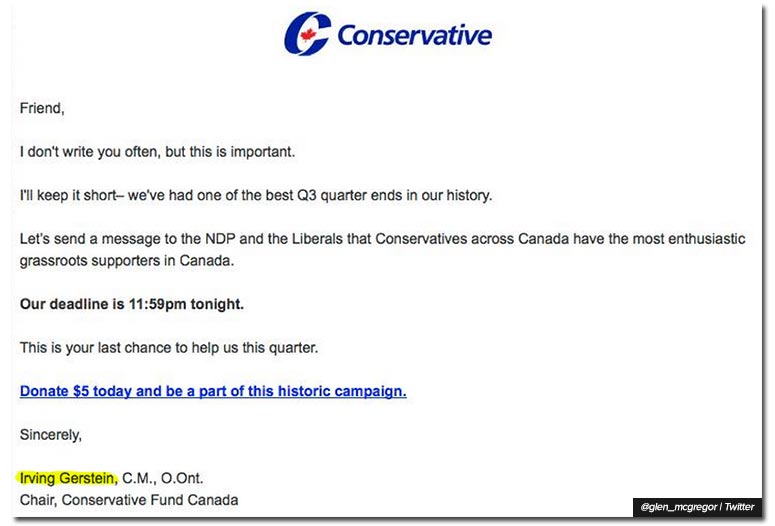 Pamela Wallin: During the 2011 election, Wallin "headlined $100-a-plate fundraising dinners and tirelessly stumped for federal candidates," according to Macleans.

Later, the RCMP alleged Wallin fraudulently claimed $673 in travel and dinner expenses during taxpayer funded trips to a board meeting for a wealth management firm and to attend what the RCMP called a "fundraiser" for Conservative MP Mike Wallace. (Wallin allegedly explained to auditors that she assumed "people paid for dinner".)

Patrick Brazeau: In 2013, the now suspended Senator Brazeau spoke at a fundraising dinner for Ontario Progressive Conservative candidate Andrew Lister, in which he made disparaging remarks about Idle No More and Chief Theresa Spence. Today, Brazeau finds himself in court on charges of physical and sexual assault.

Linda Frum Sokolowski: At a $400 per ticket cocktail fundraiser hosted by Conservative MP Mark Adler at the "elite" Albany Club in downtown Toronto in 2013, "guests mingled with Sen. Linda Frum" as well as a number of cabinet ministers, parliamentary secretaries and maybe dozens of lobbyists who appeared to have received invitations. 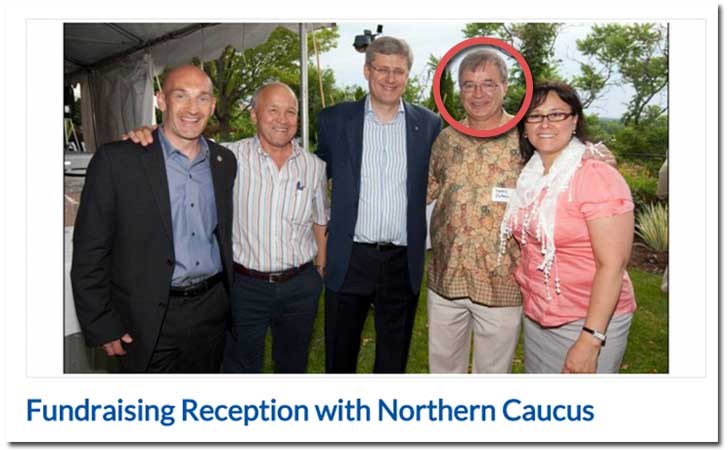 Leo Housakas: Formerly the top fundraiser for the Action démocratique du Québec, Conservative Senator Housakas has been the focus of controversy in relation to political fundraising for several years, most recently denying allegations by a star witness of Quebec's Charbonneau inquiry that he illegally solicited tens of thousands of dollars on behalf of the ADQ (it's also alleged he solicited funds on behalf of 2008 Conservative candidate Claude Carignan). Stephen Harper appointed Housakas to the Senate in 2008.

Claude Carignan: Also appointed by Harper in 2008, the former Conservative candidate turned Conservative senator has been spotted out on the Conservative fundraising dinner circuit. Carignan is currently the Government Leader of the Senate.

Larry Smith: The former commissioner of the Canadian Football League, president of the Montreal Alouettes and twice failed Conservative candidate turned senator organized a $1,000-a-plate fundraising dinner at the "prestigious" Mount Stephen Club in 2011 for his own political campaign only three months after Harper appointed him to the Senate. (After he lost the election, Smith was reappointed to the Senate).

Marjory LeBreton: In 2014, then-government leader of the Senate Marjory LeBreton was the "featured guest" at a fundraising breakfast hosted by the Nepean Conservative Association -- a new riding that likely would have been represented by John Baird had he not unexpectedly resigned recently. 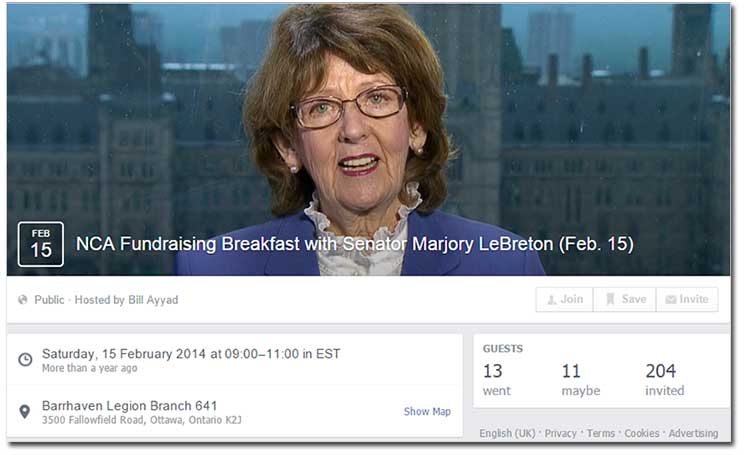