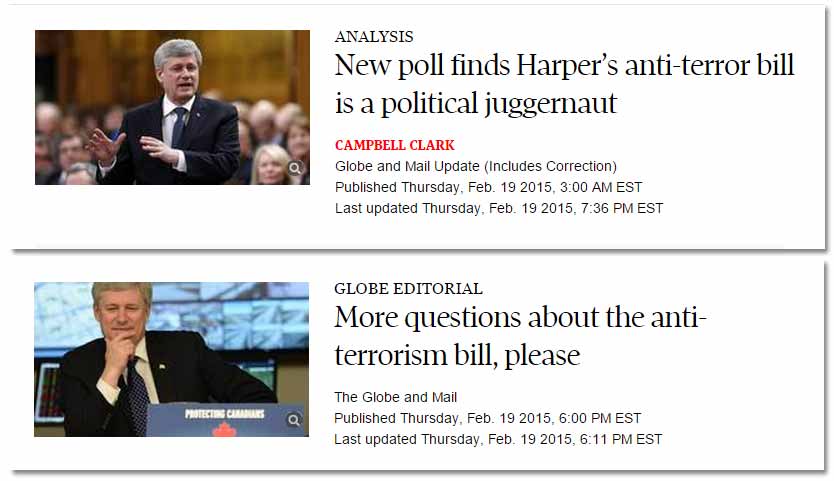 If you saw a Globe and Mail headline from last week, you may have been left with the impression that Bill C-51 is a "political juggernaut."

Peter MacKay saw it -- Canada's justice minister has been flaunting the poll as evidence that the public overwhelmingly "supports these new measures."

Even though the vaguely-worded bill has been blasted by former prime ministers, Supreme Court justices and a parade of security and legal experts for expanding police powers without oversight and threatening the basic freedoms and civil liberties of Canadians, the Globe's report on an Angus Reid poll found that four in five Canadians support the terror bill -- while an additional 36% say it doesn't "go far enough."

But even more extraordinary than that -- less than 24 hours later, the Globe published an editorial expressing skepticism about their own report and urged Canadians to ask "a lot more questions."

"What does 'promote terrorism' actually mean?" the Globe's editorial asked. And "are Canadians aware of the lengthy history of intelligence agencies, in this country and elsewhere, overtstepping their mandates?"

"Sixty-nine per cent of poll respondents said 'there should be additional oversight to ensure the police agencies do not go overboard with these new powers.' Should Canadians insist on those safeguards? Or would it be wiser to pass the bill into law without additional oversight, and hope for the best?

There is more to Bill C-51 than the political selling points highlighted by the pollsters. The legislation is too vague and too broad. Canadians should be asking a lot more questions."

What's more, if you read past the headline numbers in Angus Reid's report, the public's level of concern varies by age.

While, overall, 69% told the pollster "there should be additional oversight to ensure the police agencies do not go overboard with these new powers," nearly 75% of Canadians under 35 and 70% between 35 and 54 called for those additional checks and balances:

But who knows what any of this actually means?

A closer look at the fine print shows that a majority of the poll's respondents said they had either not heard about Bill C-51 or had "just scanned" a story / saw a headline. In Quebec alone, a full 69% of respondents indicated they had no in-depth knowledge of the bill before answering the poll:

How representative is this of public opinion? What do people think who've actually read a news story about the bill? Do these numbers reflect a broad public that isn't very informed on the debate, or a pool of poll respondents who don't closely follow the news?

Here's what this looks like as a pie chart:

Suddenly, the bill no longer looks like a "political juggernaut."

At the very least, we can say this: on the surface, Canadians seem to be as concerned about privacy and civil liberties as they are about security. So is it still a good idea for the Conservatives to rush through new powers without a full and open public debate?

As CBC's At Issue panel recently noted, the Tories attempts to ram through new terror laws by shutting down debate could easily alienate Canadian conservatives who criticize 'big government' and value civil liberties and freedom of speech.

Yet Stephen Harper's Conservatives continue to insist that no new oversight is needed for their newly-expanded powers.

How conservative is that?

Fed up with Trump? Here are 4 ways Canadians can fight hate at home

4 reasons Canadians should not be afraid to welcome refugees