When some people find themselves in a hole, they stop digging.

Alberta's Official Opposition critic for electricity and renewable energy led a parade of embarrassing headlines for his party last week rejecting the scientific consensus on climate change and declaring that "the science isn't settled":

"Is the scientific community on the degree of man's contribution harmonious? Are they all together on that? I haven't seen it. I haven't seen that anywhere."

That's at odds with the consensus position of the world's leading science organizations and 97% of peer-reviewed scientific research that agree "greenhouse gases emitted by human activities are the primary driver" of climate change.

"They are continuing to double down on statements which are not factual, that are not based in evidence and that border into conspiracy theories," said Alberta Environment Minister Shannon Phillip last week. "Albertans deserve better from their opposition."

What was MacIntyre's response to accusations he ignores scientific evidence and trafficks conspiracy theories?

MacIntyre doubled down on his claim that "the science isn't settled," posting a factually incorrect cartoon attacking scientists on his Facebook page Saturday: 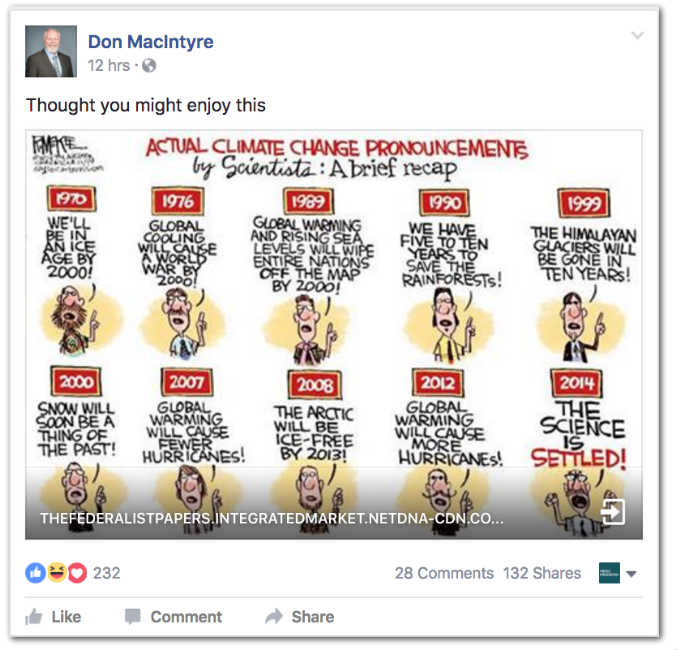 Although the cartoon states that these are "actual climate change pronouncements by scientists," last year one blogger noticed the cartoon circulating online and decided to do a fact check – he had trouble verifying sources for many "pronouncements," though he found some appeared to be "wildly inaccurate" or cited people who were not an "actual" scientist.

Apparently the cartoonist responded, but instead of providing sources, he copy-pasted a 5,000 word blog titled "124 Years of Failed Climate and Environmental Predictions" – except it only included 92 examples, many citing Victorian-era weather forecasts, general discussions about the Ice Age and quotes from people who aren't "actual" scientists.

Which brings us to the million dollar question: why is Don MacIntyre more skeptical of peer-reviewed science than he is of a cartoon?

In the comment section under his post, MacIntyre accepted congratulations from supportive climate change deniers – at one point, the Wildrose MLA even appeared to suggest the science underpinning climate change is really a "socialist" conspiracy:

Previously, Wildrose technology critic Grant Hunter posted an image of the evolution of women's underwear dating back to the Age of Enlightenment that is supposedly "proof of global warming": 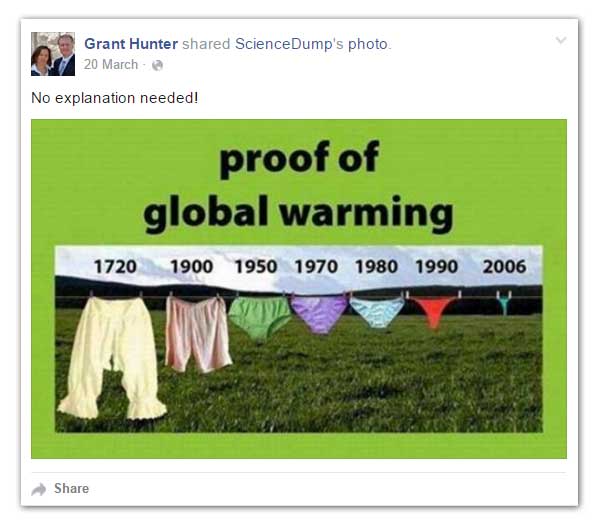